Kazakhstan at a Glance

Kazakhstan is the 9th-largest country in the world by landmass, with a population of only about 18 million people. A large portion of Kazakhstan is covered by a treeless steppe landscape and is sparsely populated. Its largest city is Almaty, with a population of almost 2 million, and another 2 million people live in the nearby Almaty Region. This Region is the most touristic part of the country with major natural highlights like Altyn Emel National Park, Charyn Canyon and Kaindy and Kolsai lakes. From Almaty, one can also go for day trips to the nearby Medeu Ice skating rink or Shymbulak ski resort, since the city is situated right at the foot of Tian Shan mountains. Astana is the capital of Kazakhstan and has a population of a little over one million. It is located at the Esil River and became the capital of the country in 1997. It is a modern city building featuring buildings from star architects like Norman Foster. One of the outstanding historical and architectural highlights of Kazakhstan is the Mausoleum of Khoja Ahmed Yasawi, located in Turkestan. It was built in the 14th century in honor of the 12th-century Sufi philosopher and poet.

Kazakhstan is the largest landlocked country in the world, which means that it is “almost or entirely surrounded by land.” Kazakhstan has numerous lakes within its territory, largest of which is Balkhash; other big bodies of water include the Aral and Caspian Seas, which are located on its borders. The Kazakh steppe extends for around 2000 kilometers, covering about 800,000 km2 and is characterized as semi-desert steppe. The lowest point of Kazakhstan is located in the Mangystau region: the Karagiye depression, which is 132 m altitude below sea level. Kazakhstan has amazing biodiversity – it contains over 6000 varieties of plants, of which around 500 are endemic; there are also about 500 types of birds170 kinds of animals. Around 5,000 years ago, the first horses were domesticated in North Kazakhstan. Apples and tulips also originated from Kazakhstan and one can still spot wild tulips and wild apples in the Aksu Jabagly national reserve. Incredible Saiga antelopes are also to be spotted in Kazakhstan; however, in 2015, around 200,000 saiga antelopes died from a bacterial infection. In the national reserve, there are special bird-watching tours with ornithologists in autumn, where one can spot seasonal migrations. Kazakhstan also has a large population of wolves -around 90,000. Wildlife in the Tian Shan mountains also includes snow leopards, brown bears, and ibex. A brief history of Kazakhstan

The territory of Kazakhstan has been inhabited since the early Paleolithic times, which is about a million years ago. Vast steppes and the domestication of horses transformed the settled life of early cultures into a nomadic lifestyle. Nomads of the steppes were known as Scythians. On the territory of Kazakhstan rich burial sites were found, for example, Issyk Kurgan or burial site of a Golden Man. The site is dated to 3-4 century BC and the major finding was a skeleton of a young person covered with golden clothing. Findings indicate that nomads left a rich cultural heritage, as it can be seen from intricate golden artifacts from burial sites and a sophisticated worldview, interwoven with myths and legends, as the motives of the gold jewelry are often tied to mythological and fantastic creatures. People inhabiting the territory of Kazakhstan later became part of different Turkic and Mongol Empires. In the late 15th century, the Kazakh khanate emerged, consisting of three major divisions called- Zhus. Starting in the 18th century, the Kazakh Khanate establishes diplomatic relations with the Russian Empire and gradually became part of it. From the 1920s to 1991, it was part of the Soviet Union and, after the collapse of the USSR, it became an independent state. Kazakh currency is called tenge. It replaced the Soviet currency – the ruble – in 1993. In the cities, you can exchange major world currencies without a problem. It is easiest to bring dollars or euros. You can also withdraw money from ATMs or pay by card at international stores, hotels and food chains. The climate in Kazakhstan is continental, meaning it can get very hot in summer and cold in winter. Because of its large territory, the weather and climate differ greatly from north to south. In the north, the steppes gradually go into the Siberian region and it can get very cold in winter – even below -40° C. Nur-Sultan, located in the north, is known as the second coldest capital in the world after Ulan Bator. The south has a milder climate in winter.

The best time to visit Kazakhstan depends on what you would like to see. If you are visiting Nur-Sultan the best time is either beginning of June or end of August, since it is not too hot and not too cold. Almaty is best in Spring or Fall. However, you can visit both cities from May to October, but in summer the temperature can get over 40°C. For hiking in the Tian Shan mountains and outdoor activities, the period between June and September has a pleasant temperature. For visiting Altyn Emel, Korgalzhyn and Aksu Jabagly, the best time is spring as you can see green steppes and wildflowers. Starting from July, the weather gets hot and nature starts turning already yellow since precipitation is very low in summer. 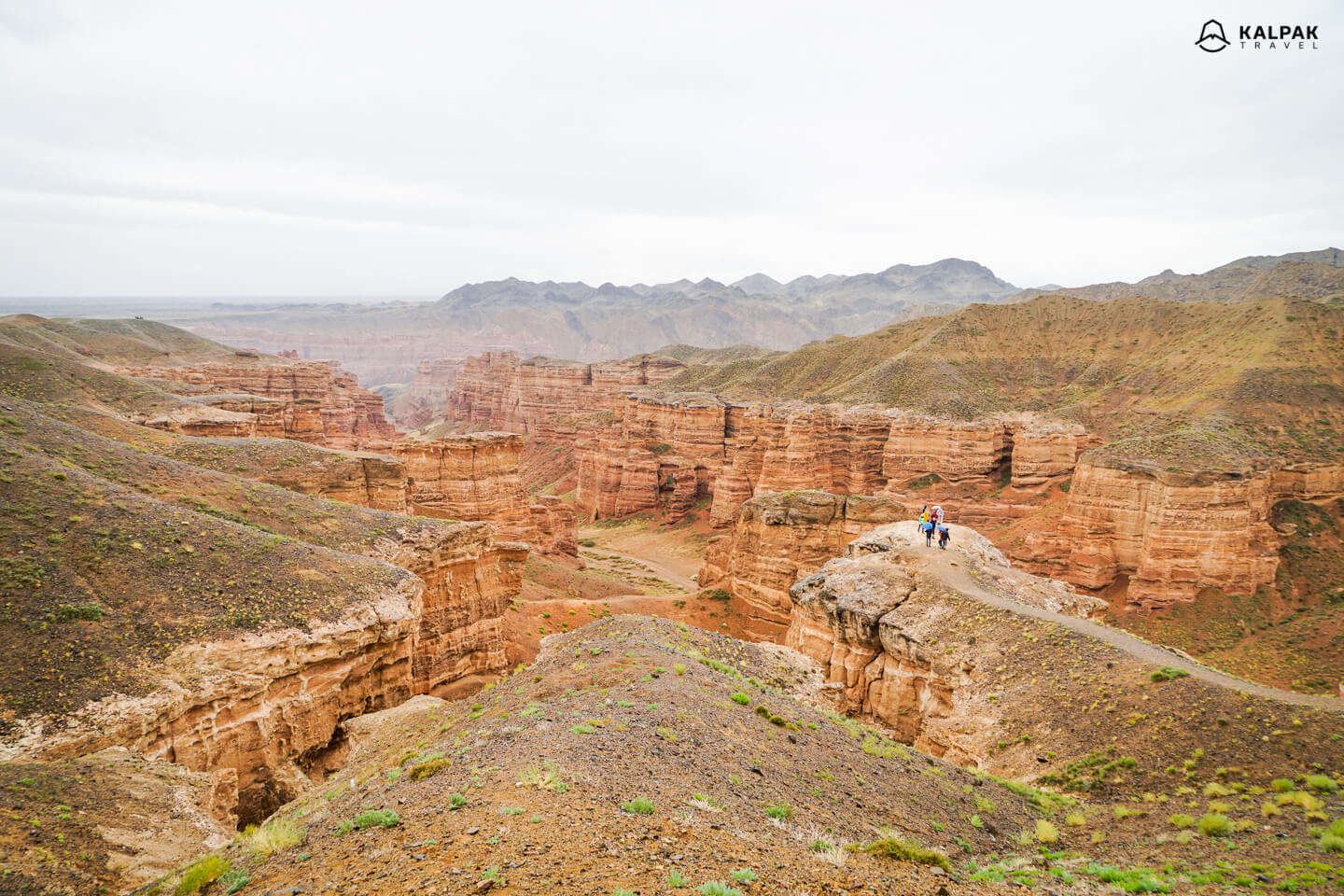 The majority of Western tourists do not need a visa for stays of up to 30 days. Citizens of the following countries need no visa to enter Kazakhstan: Argentina, Azerbaijan, Australia, Brazil, Canada, Chile, Ecuador, Iceland, Israel, Japan, Malaysia, Mexico, Monaco, New Zealand, Norway, Serbia, Singapore, South Korea, Switzerland, Tajikistan, Turkey, United Arab Emirates, United States, Uzbekistan and all European Union countries. For stays up to 90 days, citizens of these countries need no visa to enter Kazakhstan: Armenia, Belarus, Georgia, Kyrgyzstan, Moldova, Mongolia, Russia and Ukraine. Citizens of all other countries need to get a visa from the Kazakh diplomatic mission in their country. As visa requirements vary from country to country, we’d advise contacting the nearest embassy directly to confirm what you’ll need to do. If you don’t have a Kazakh diplomatic mission in your country and you are not from a country with a visa-free regime, then you can obtain your visa on arrival. This can only be done at the airports in Aktau, Almaty, Astana, Atyrau or Oral Ak Zhol. However, to get such a visa, you must hold an invitation letter that has been approved by the Kazakh Ministry of Foreign Affairs. How to get to Kazakhstan

Kazakhstan has very good international flight connections and Almaty is the largest and busiest airport in the whole of Central Asia. From Almaty, there are regular flights to other Central Asian capitals. Direct flights to Kazakhstan can be taken from London, Paris, Frankfurt, Dubai, Seoul, Beijing, Istanbul, Moscow and others. You can also travel overland, crossing the border from Kyrgyzstan, Uzbekistan, China or Russia. You can get from Bishkek, Kyrgyzstan to Almaty, Kazakhstan by a shared taxi or bus. There are also buses to China. There are boats from Baku through the Caspian Sea, but they are not regular and not the most common type of transportation for traveling.

Before you go to Kazakhstan

Make sure that you have a passport that will be valid for another 6 months after your departure date. Check with your doctor that you have all of your regular vaccinations. Do your regular yearly dental and gynecologist checks before your trip. If you have any chronic diseases, make sure that you can travel long distances safely and bring all your medicines and prescriptions. If you have allergies or food intolerances, make sure to bring your medicines and notify your hosts or travel agency.

You can book accommodations on major websites like Trip Advisor, Booking.com or Airbnb. There is a wide range of accommodations, from hostels to luxury 5-star hotels. Most of the hotels and hostels have a good Wi-Fi connection. In smaller towns and villages, the range of accommodation is smaller, usually no luxury international hotels and local hotel or B&B. There are a few nomadic yurt-stays, but rather few touristy spots with yurt accommodation. For yurt stays, better head to Kyrgyzstan.

Food and Cuisine in Kazakhstan

National cuisine is traditionally based on the nomadic cultural legacy or, in other words, it involves lots of meat. The national dish is Besh Barmak, which, translated, means five fingers since in ancient times nomads ate with fingers. The traditional drink is a fermented horse or camel milk. Additionally, the national cuisine was greatly influenced by the diet of neighboring settled cultures and, in fact, five Central Asian countries have very similar cuisines. Nowadays, Kazakhstan offers a variety of cuisines to its visitors, you can choose from vegetarian restaurants to a variety of other world cuisines, such as Italian, Japanese, Korean, Russian, Mexican etc. You can even find McDonald’s, Starbucks and other international food chains in large cities of Kazakhstan like Almaty, Astana, and Karaganda. Clothes and Shopping in Kazakhstan

Traditional national clothes of the Kazakh people are still highly appreciated and worn for national holidays; traditional nomad ornaments are also used in new modern ethnic design clothes. However, casual clothes are very similar to those in the West. People are very liberal; you can find people wearing scarves or miniskirts, shorts or suits. In Kazakhstan, there are also large Western brands like HM, Zara and many others. You can wear your normal clothes and you will be fine. International stores have similar prices to Europe and local produce in bazaars is cheaper. For souvenir shopping, you can either go bazaars or special souvenir shops in malls. You can buy cute felt figures, felt rugs and bags decorated with traditional ornaments or silver jewelry with traditional decorative elements. Kazakhstan also produces souvenir chocolates that are very cheap. In the malls, you cannot negotiate the prices; in bazaars, you might negotiate maybe 10-20% down the price, but negotiation is not that common for shopping in bazaars of Kazakhstan.

If you lost your passport, contact your embassy/consulate in Kazakhstan. Have with you emergency numbers written down or saved in some cloud storage/Dropbox/mail etc.

Beyond the top places to travel in Kazakhstan, there are also other travel destinations to visit. For example, with a lot of patience and planning, you can visit Baikonur Cosmodrome, where spaceships are launched. Another site which requires permission is Semipalatinsk Polygon, where Soviet atomic tests were completed. If you are interested in Soviet history, you can visit Karlag, a gulag, a Soviet place of repression that is now a museum near Karagandy. Visit Semei to see the museum house of Dostoevski where he lived in exile. You can also visit Korgalzhyn State Nature Reserve, where you can spot flamingos.

Moreover, there are UNESCO Intangible Cultural Heritage of Humanity including:

If you would like to see major highlights of Kazakhstan in just a week, check out the «Best of Kazakhstan Tour» that will take you through Astana, Almaty, Altyn Emel, Charyn Canyon and Turkestan.