Uzbekistan is one of the fascinating countries in Central Asia and famous for its Silk Road cities of Samarkand, Bukhara, and Khiva. Twice the size of the UK, it has a rich cultural heritage and a long history steeped in tradition. You won’t be surprised to learn that it is home to four significant UNESCO World Heritage sites and six UNESCO Intangible Cultural Heritage listings.  Another thirty are waiting in the wings on the Tentative List.  From such a rich list of important places to visit, things to do and an enormous variety of sightseeing tours on offer, we present you with our pick of Uzbekistan Travel – Top 10 Places to Visit: “Samarkand – Crossroad of Cultures” is the official moniker used to describe this city as a UNESCO World Heritage site.  Samarkand conjures up images of ancient times and sounds almost mythical.  However, this is no fairytale: Samarkand today is a lively city that cherishes its traditions.  Archaeological excavations have revealed a history which dates back 3500 years; the town of Afrosiab was founded in the 7th century BC.  The area was continuously inhabited and served as a melting pot of diverse cultures.  It was conquered by Alexander the Great and Genghis Khan, was the sumptuous capital of the Timurid Empire and played an important role in the development of Islamic architecture and arts.  You won’t want to miss Registan square, the Bibi Khanum and Gur Emir Mausoleums, the Shah-i-Zinda complex, Afrosiab  & the Ulughbek Observatory. 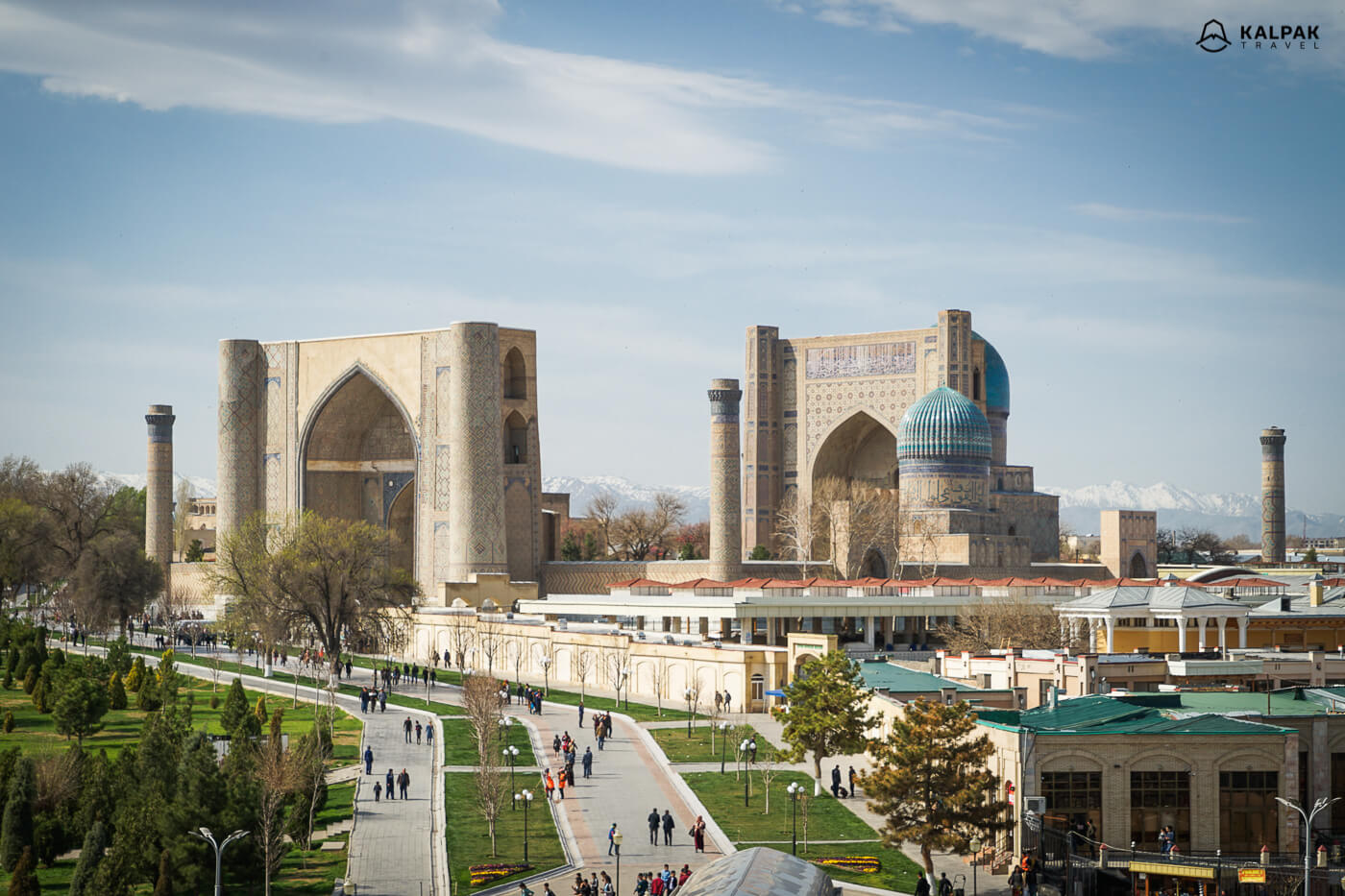 The historic center of Bukhara has been an important base for Islamic theology and science for several centuries.  Its well-preserved city center was recognized by UNESCO as an exemplary medieval city.  City-planning, urban, economic, and scientific development in Bukhara had a large impact on the Islamic World in the Middle Ages.  The earliest architectural monument is the tomb of Ismail Somoni dating back to the 10th century. For seven centuries up until the 16th century, it was the largest Islamic center for the study of Sufism with hundreds of mosques and madrasas or learning places.  World-renowned scholar Avicenna was born near Bukhara and grew up there.  While in Bukhara we’d recommend taking a stroll around the old city to savor its architectural legacy and imagine yourself bargaining as they would have done in medieval times. 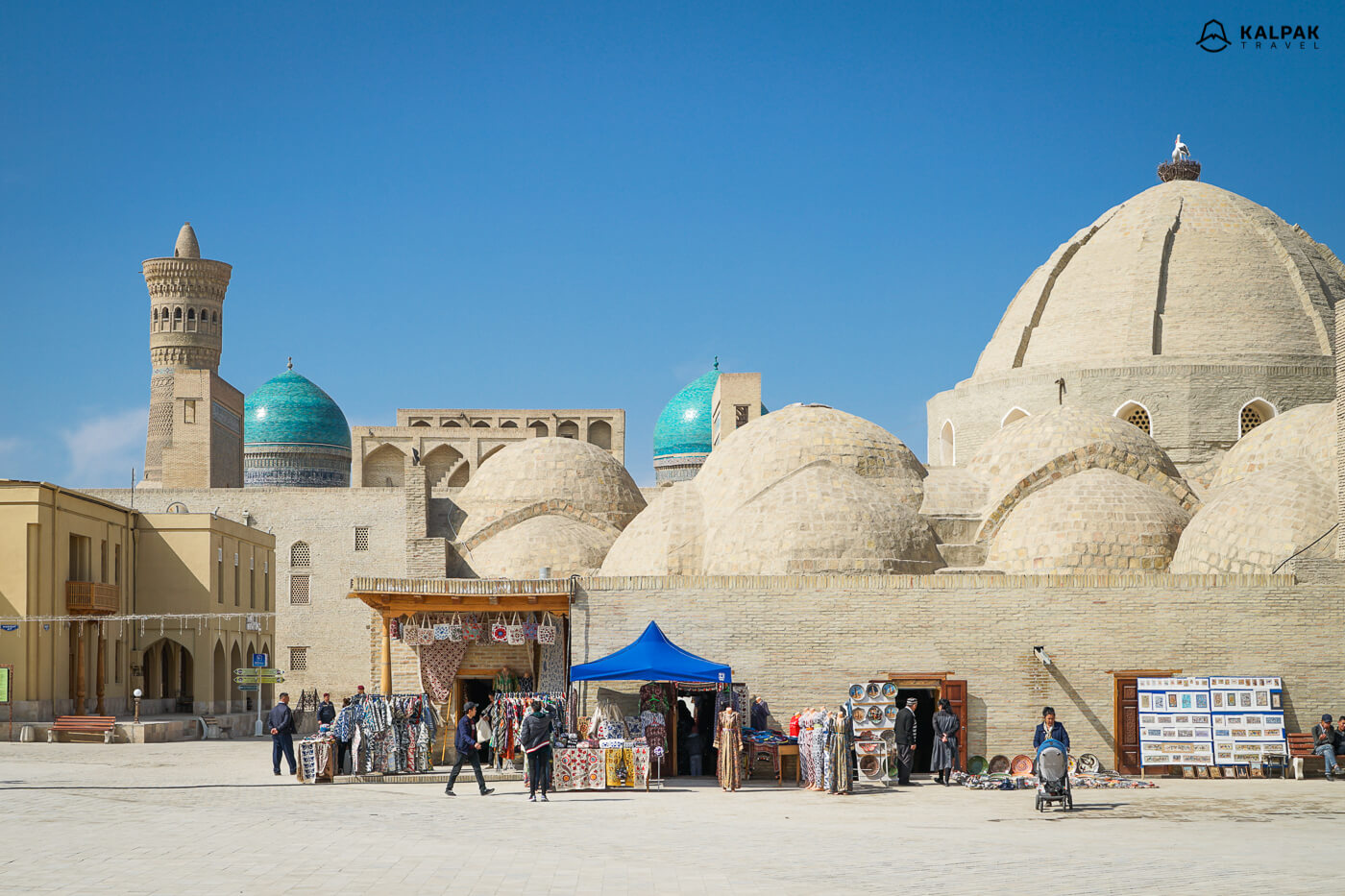 Khiva is the first UNESCO World Heritage site in Uzbekistan was inscribed in 1990 noting its importance in the exceptional heritage of ancient Silk Road traditions.  Itchan Kala, which literally translates as the inner part of the old city, is surrounded by thick mud walls.  It contains 51 monuments and is although around 250 households still make their home inside, it feels more like an open-air museum.  Looking down from Islam Khoja minaret or the city walls, it’s hard to imagine this is the 21st century.  It is here in Khiva that the scholar AI-Khoresmi, the father of algebra, was born and introduced algorithms to the world.  Take a guided tour to get to know the stories that feature in the history of this fascinating city. 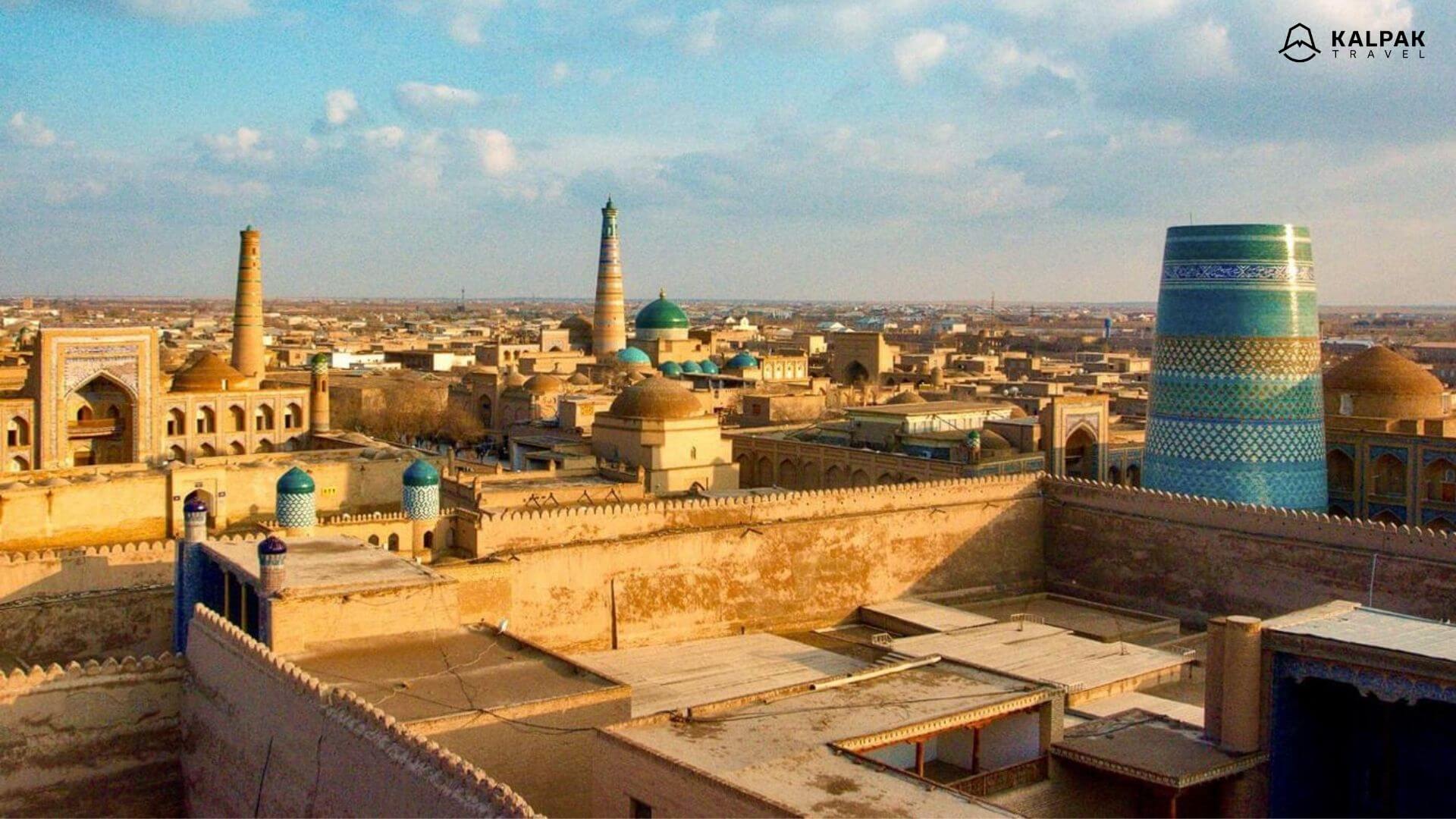 This flourishing city of the Timurid Empire is the birthplace of the great medieval conqueror Amir Temur.  It has exceptional monuments from 14th to 15th centuries though its history dates back over 2000 years.  Its historic center retains the layout from the original Timurid city planning.  Amir Temur ordered the Ak Sarai – the white summer palace – to be built as well as his own grave. Tamerlane’s summer palace was one of the highlights of the Timurid architecture.  These days you can still see the remains of the palace’s 65 meter high monumental gates. Tashkent is the capital of Uzbekistan and with a population of 3 million people, it is the largest city in Central Asia.  This large metropolis reflects the historical development of the country from its architectural monuments of oriental design to its Soviet planned street layout and its modern glass high buildings.  The area of modern Tashkent was already settled in the 5th to 3rd centuries BC.  Its name literally translates as “stone city”.  It has been destroyed several times in history; the most recent damage came from the earthquake in 1966 when many of its ancient historical monuments were destroyed. Thus Tashkent today is a modern city with a wide variety of restaurants and shopping opportunities. 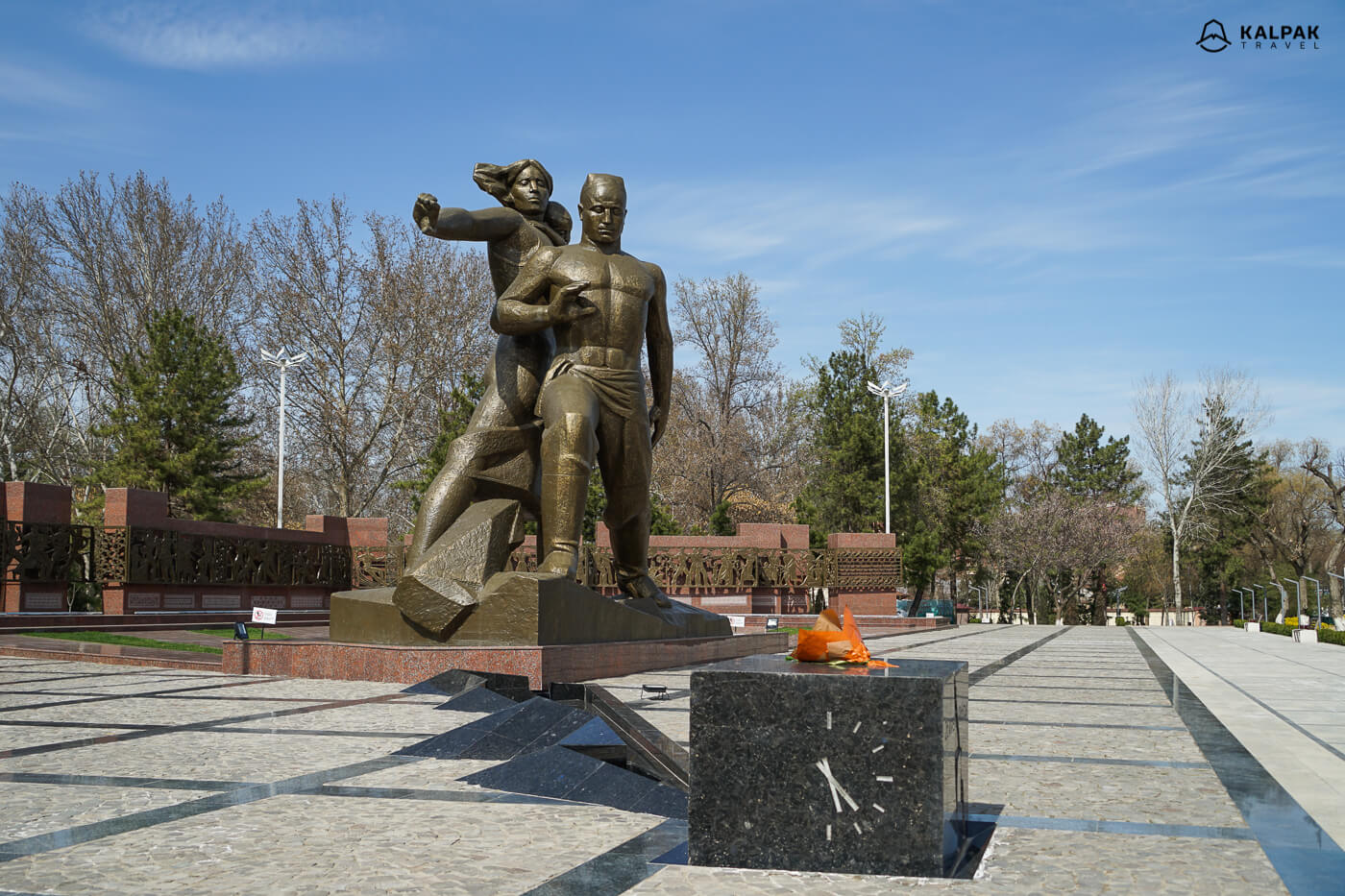 Aidarkul is a semi-artificial lake created as a result of Soviet agricultural planning. On the site of Aidarkul, there was once a small seasonal lake that used to dry up completely in hot summers.  In summer 1969, the high waters of Syr Darya overflowed the irrigation reservoir dam and water flooded the lowland beneath. Today the lake covers an area of around 4000 square kilometers, stretches for 250 kilometers in length and sits right in the middle of the Kyzylkum desert.  It is a unique place to sleep in a yurt surrounded by desert and ride horses or camels. If you would like to support eco-tourism in Uzbekistan, there is a possibility to drive further to Nurota Mountains. There are local guesthouses where you can stay overnight and do some light hiking. 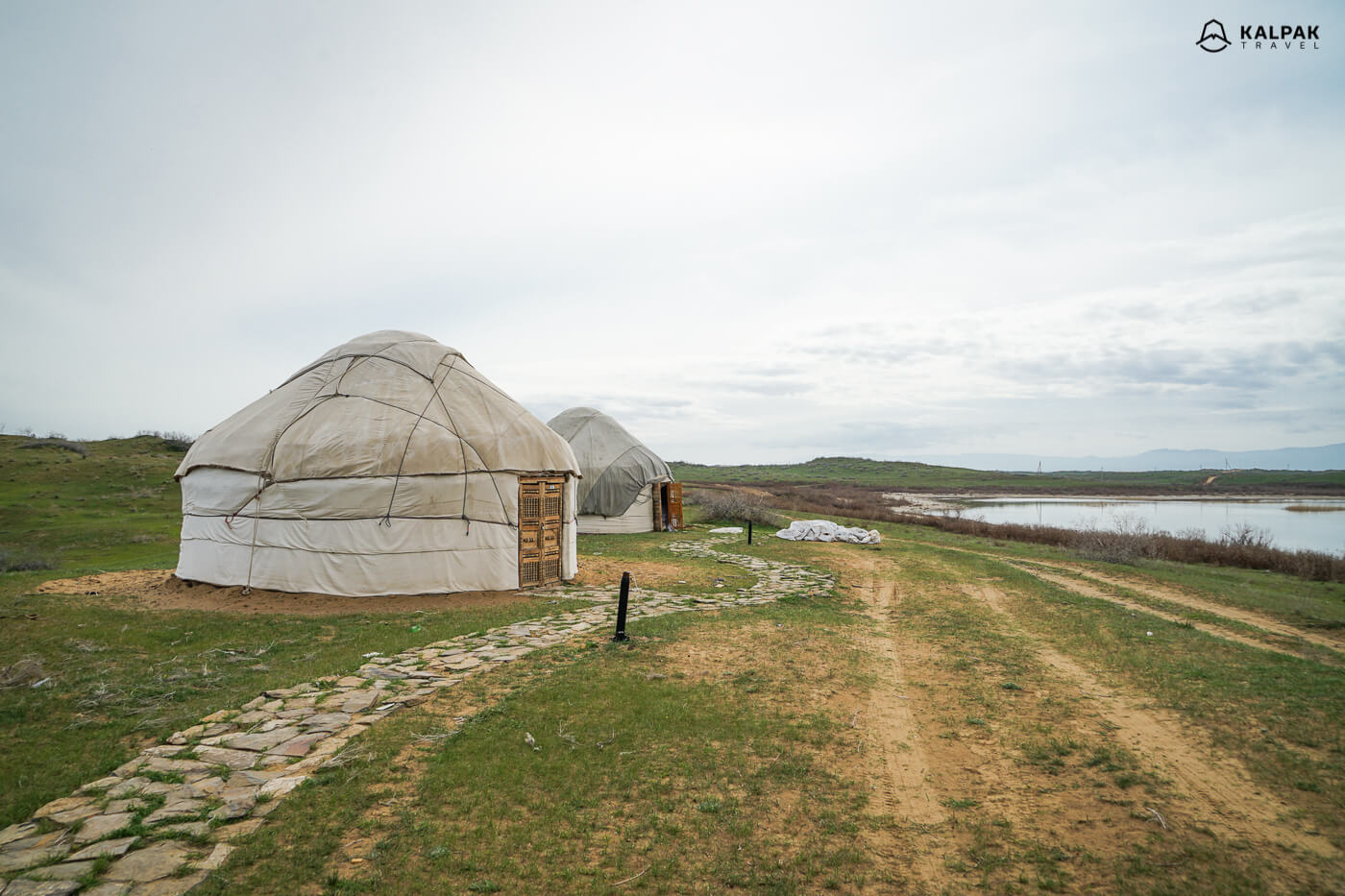 Few tourists ever venture as far south as Termez. It’s a pity as it is a place of exceptional historic importance and with a wealth of intriguing archaeological sites from pre-Islamic times. In the 6th century BC, Termez was already known to the Achaemenids, and it was later conquered by Alexander the Great. The city’s medieval fortifications ran for 10 miles, and the famous Moroccan traveler Ibn Battuta wrote of its lively bazaar, fine buildings, canals, and gardens. It is still possible to see the ruins of Kara Tepe and Fayaz Tepe, two important ancient Buddhist monasteries, plus the Kyrk-Kyz Fortress, and the archaeological museum is one of the best in Central Asia. You can visit the famous Termez Archaeological Museum to learn about the millennia of history, where religions of Buddhism, Zoroastrianism, and Islam developed. Following the museum, you can visit the archeological sites such as Fayaz Tepa and Kampir Tepa. 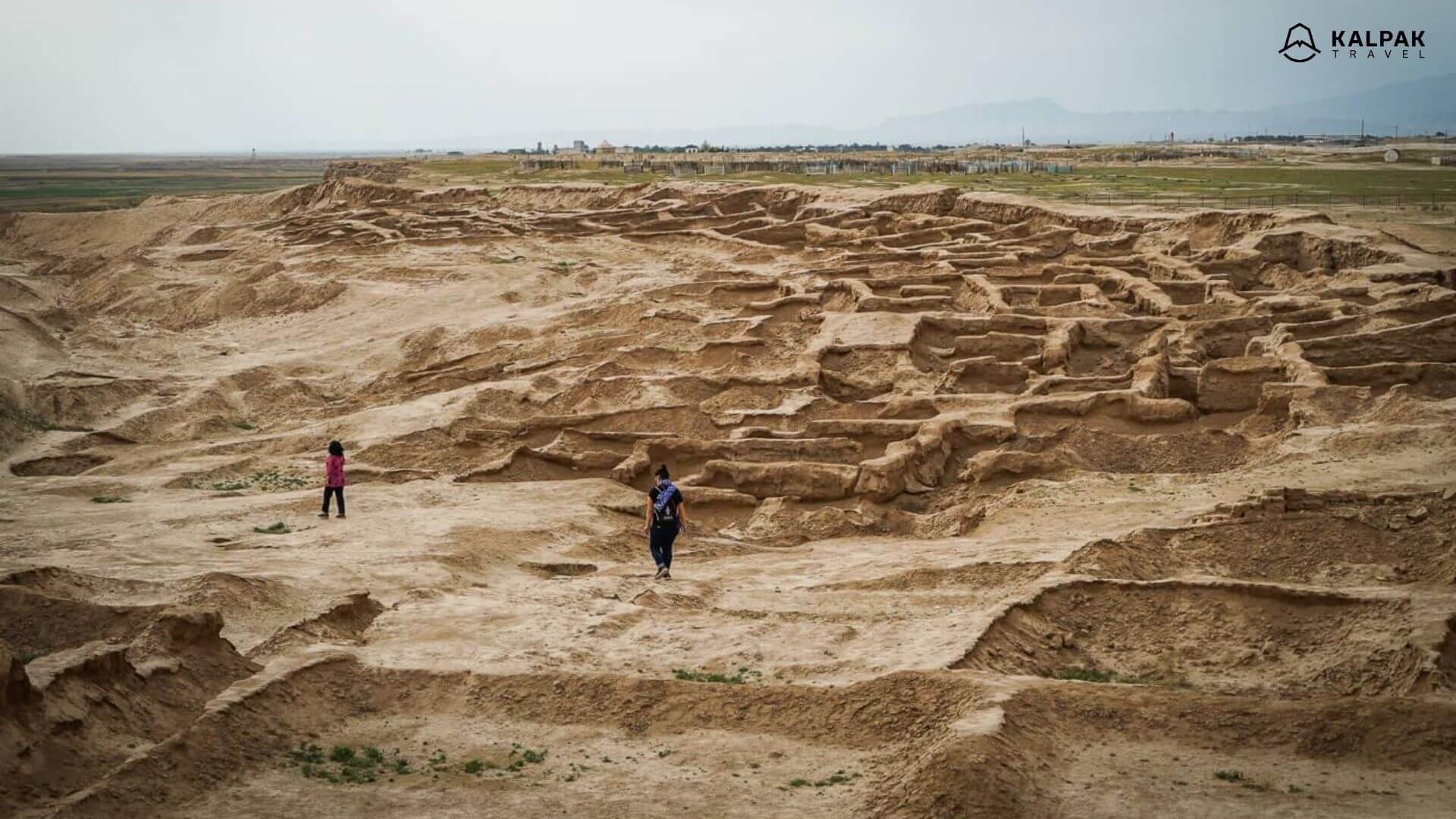 Ancient Khwarezm was known for its numerous fortresses rising above the deserts of Kyzyl Kum.  There are fortresses dating back more than 2200 years.  Most of them were settlements, fortresses with walls that could be seen from another fortress, and thus designed to help maintain control over the region and to pass on messages.  There are numerous legends connected to each of these fortress ruins and rich archaeological finds. One of the most special is called Chilpyk, which used to be a place of Zoroastrian burial practice.  Dead bodies were left there for years and the cleaned bones would be collected to be buried in ossuaries. Explore different ruins of ancient fortresses. 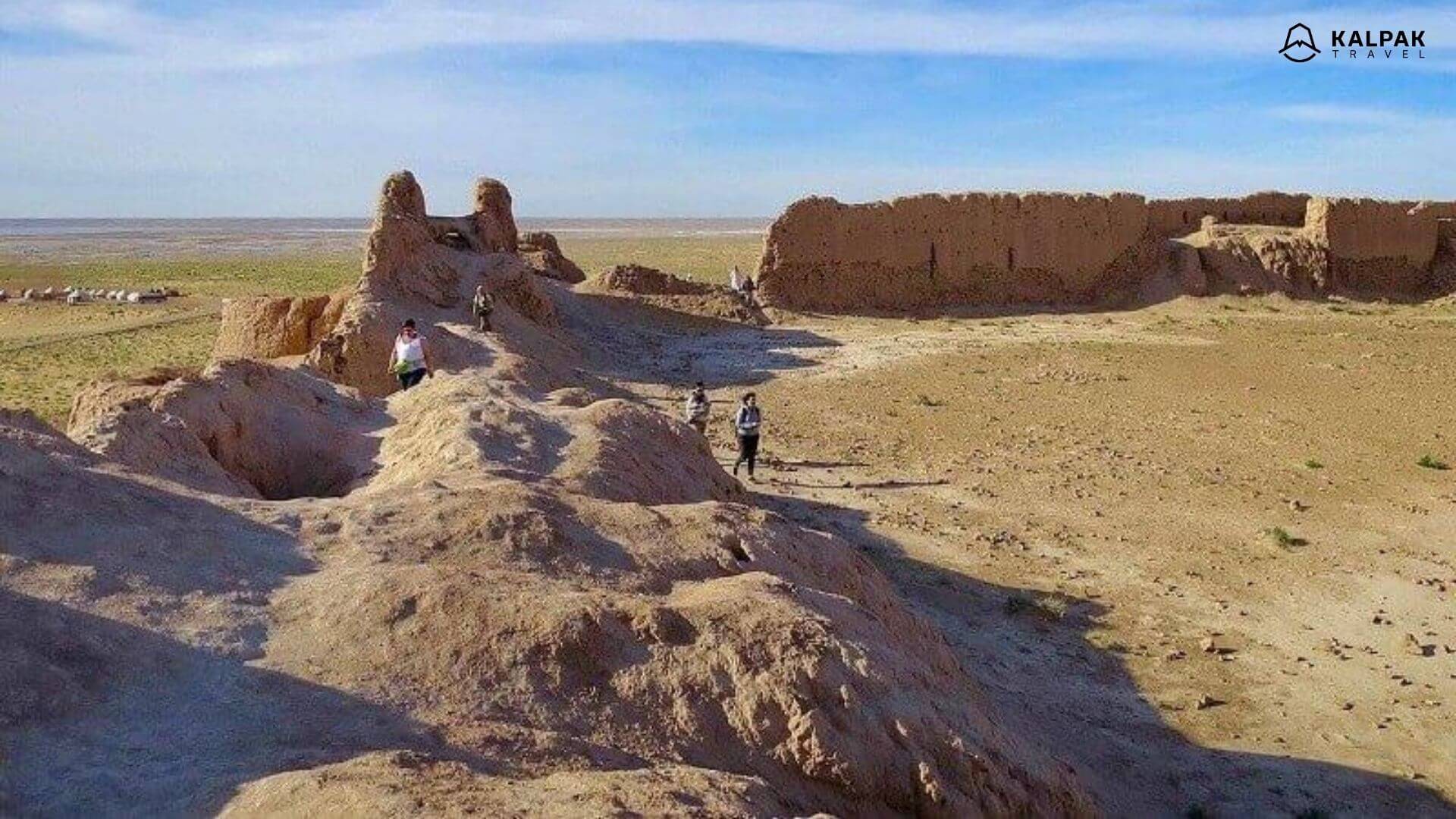 The Fergana Valley has been and still is an important crossroads for different religions, cultures, and nations.  Split between Uzbekistan, Tajikistan and Kyrgyzstan it shows the diversity on each side.  In Uzbekistan, the Fergana Valley is home to the important medieval Silk Road stops of Andijan, Kokand, Fergana and Namangan.  Its horses were known as heavenly horses and highly valued in China for several centuries.  The founder of the Mughal Empire, Babur, was born in this region. Fergana has fascinating stories to reveal and maintains its old traditions of pottery and silk production which make for interesting excursions. 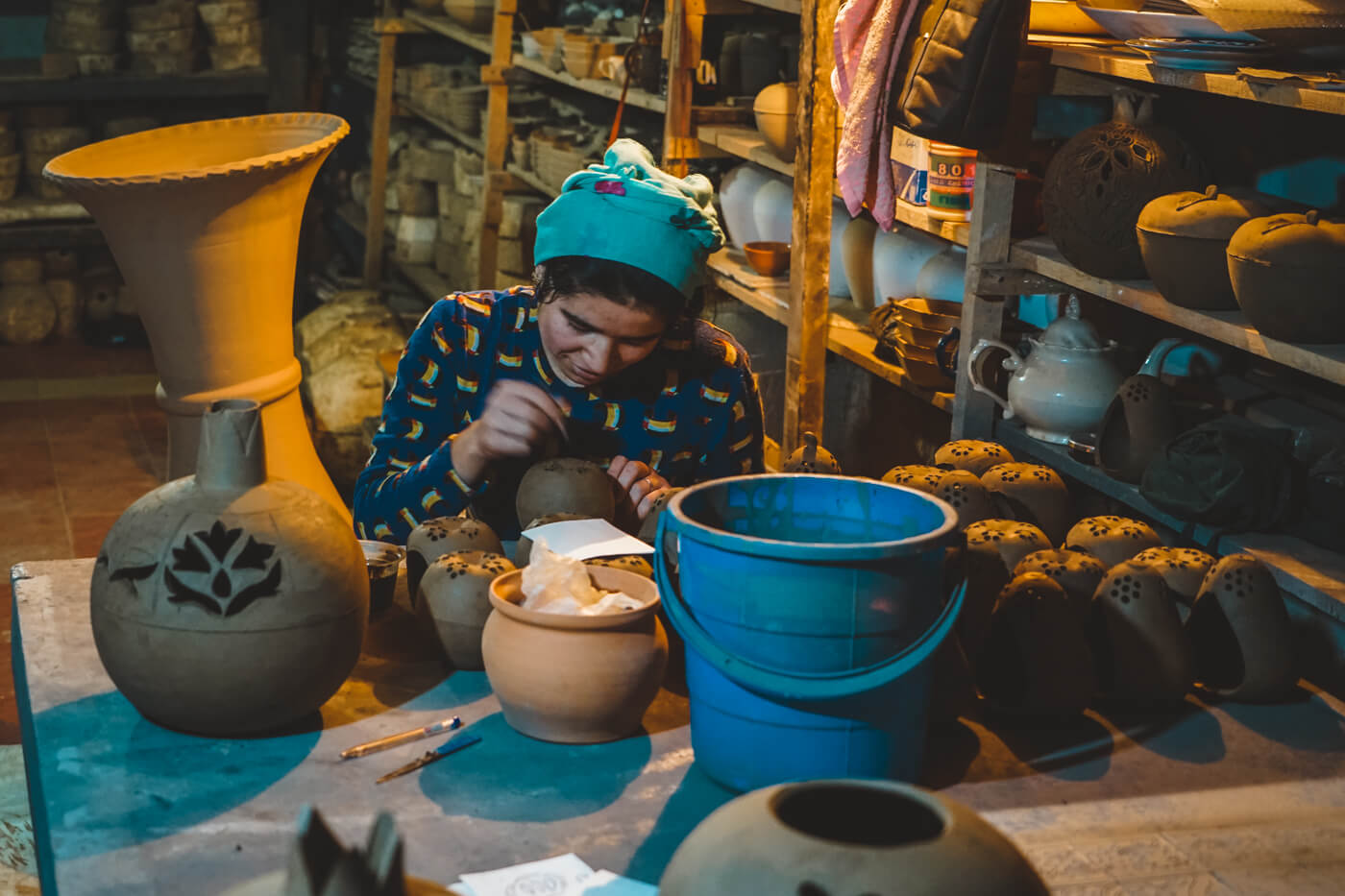 Nukus is the capital of an Autonomous Republic within Uzbekistan: Karakalpakstan.  It is located in the north of the country next to the Aral Sea.  Though it can’t measure up to Uzbekistan’s Silk Road cities in terms of impressive architecture, it does showcase the history of the Karakalpak people with its beautiful jewelry, tapestry, and other national artifacts. One of the most intriguing museums to be found in Nukus is that which contains the Savitsky collection of art forbidden in the Soviet Union. From Nukus you can drive to the Aral Sea. The Aral Sea was once a large and important navigable sea in Central Asia, split between Uzbekistan and Kazakhstan.  It had rich resources for industrial fishing and local canned fish was produced.  Muynak was once one of the many flourishing fishing towns on the shores of the Aral Sea.  But since 1960, the Aral Sea has been rapidly shrinking as a result of water diversion and overuse of the river water for irrigation purposes.  What was once water is now a desert littered with the rusting hulks of ships, beached forever in a chilling reminder of the fragile balance between nature and humans. 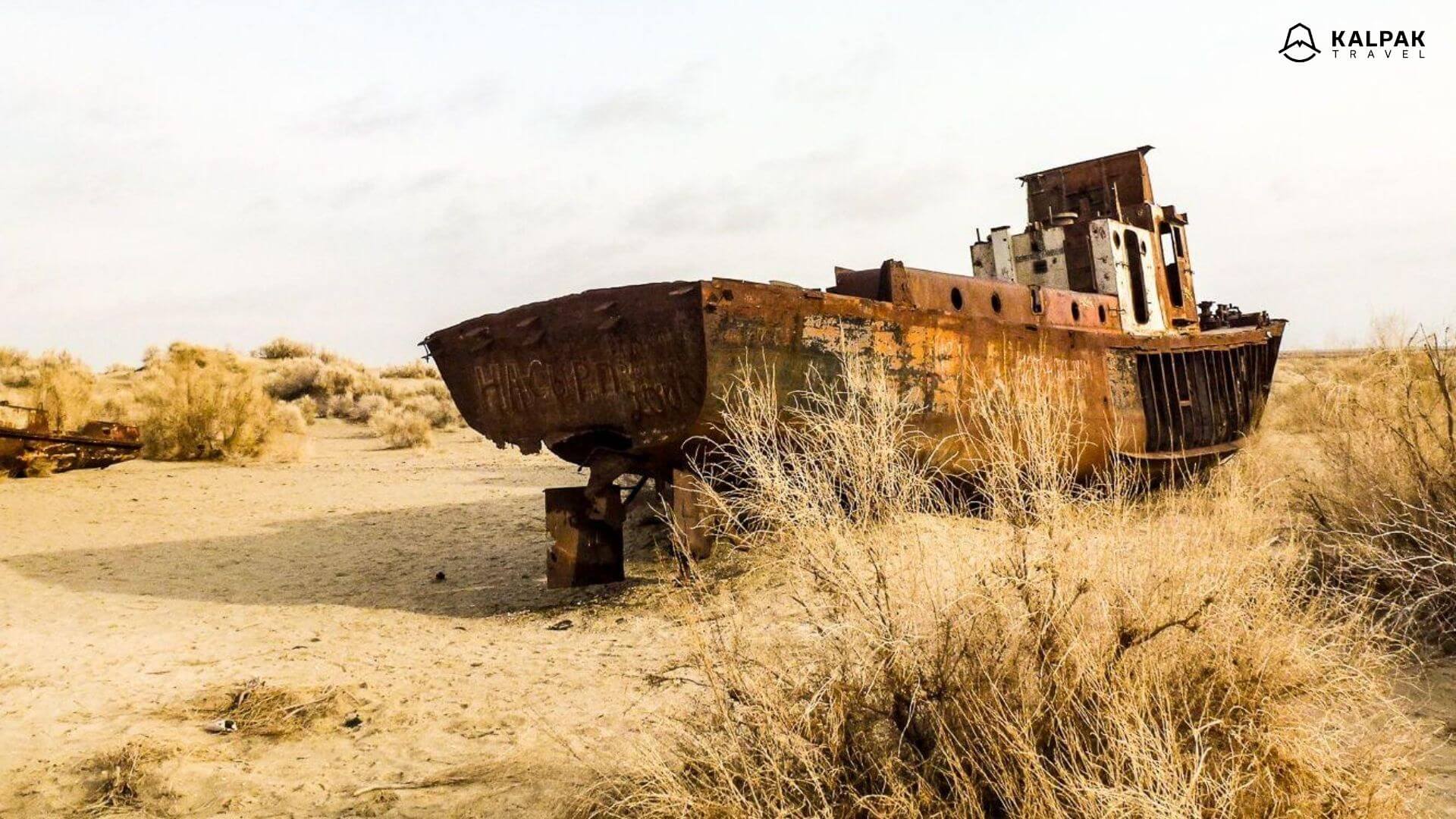 Keep up with our blog or travel to Uzbekistan yourself to learn more first hand about the country’s fascinating history and rich culture.

You can find all our small-group tours to Uzbekistan here. All listed departures are guaranteed. If you prefer a custom private tour, please don’t hesitate to contact us.

On Tripadvisor you can read reviews from some of our travelers about their trips to Central Asia and Uzbekistan.