Almaty was the capital of Kazakhstan from 1929 to 1997. Now it is the largest city in Kazakhstan, with a population of around 2 million. Known commonly as Zenkov Cathedral, its actual name is Ascension Cathedral. This building is a very popular stop on city tours because of its unique wooden architecture that dates back to pre-Soviet times in the beginning of the 20th century. The project of the building was designed by architect K.A. Borisglebskiy; however, it was not approved. In 1889 there was a legal regulation for construction work stating that public buildings should be built only with wood. This rule was a consequence of the devastating earthquake in 1887 that destroyed most of the stone buildings, but surprisingly not the wooden ones. The initial design of the cathedral was perfected by Zenkov. Andrey Pavlovich Zenkov was responsible for the construction of the building and implemented significant practical innovations to ensure its seismic stability. The cathedral was erected between 1904-1907 and survived a major earthquake in 1911. Its height is 46 meters and located right next to Panfilov Park. During the Soviet Union, the building was a museum, but since 1995, it became again an orthodox Christian Cathedral as it was initially built for. 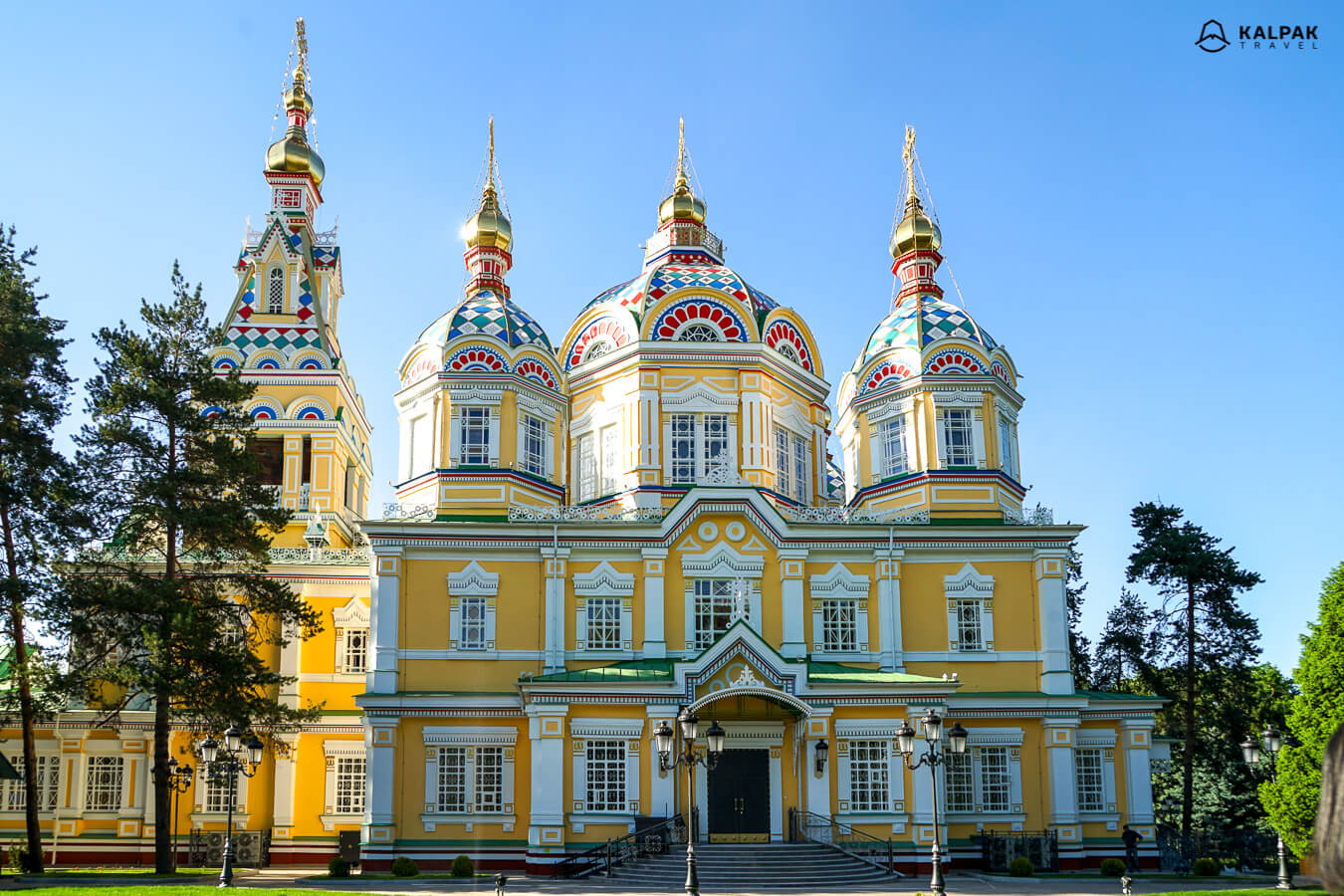 In many post-Soviet cities in Central Asia, there are parks named after Panfilov or, to be exact, Panfilov’s 28 Guardsmen. Panfilov commanded the 316th Rifle Division, which mostly consisted of Kazakh and Kyrgyz soldiers during the defense of Moscow in 1941. Panfilov division died in battle during the World War II. You can see brutalist massive statues of the soldiers in the middle of the park. It was erected in 1975 and was dedicated to the 30th anniversary of the WWII victory. You can also find a statue of General Ivan Vasilyevich Panfilov at the entrance to the park; his statue was installed in 1968. Here in this park, you can also see the eternal fire in memory of the fallen during WWII and you will see flowers brought here all year round. 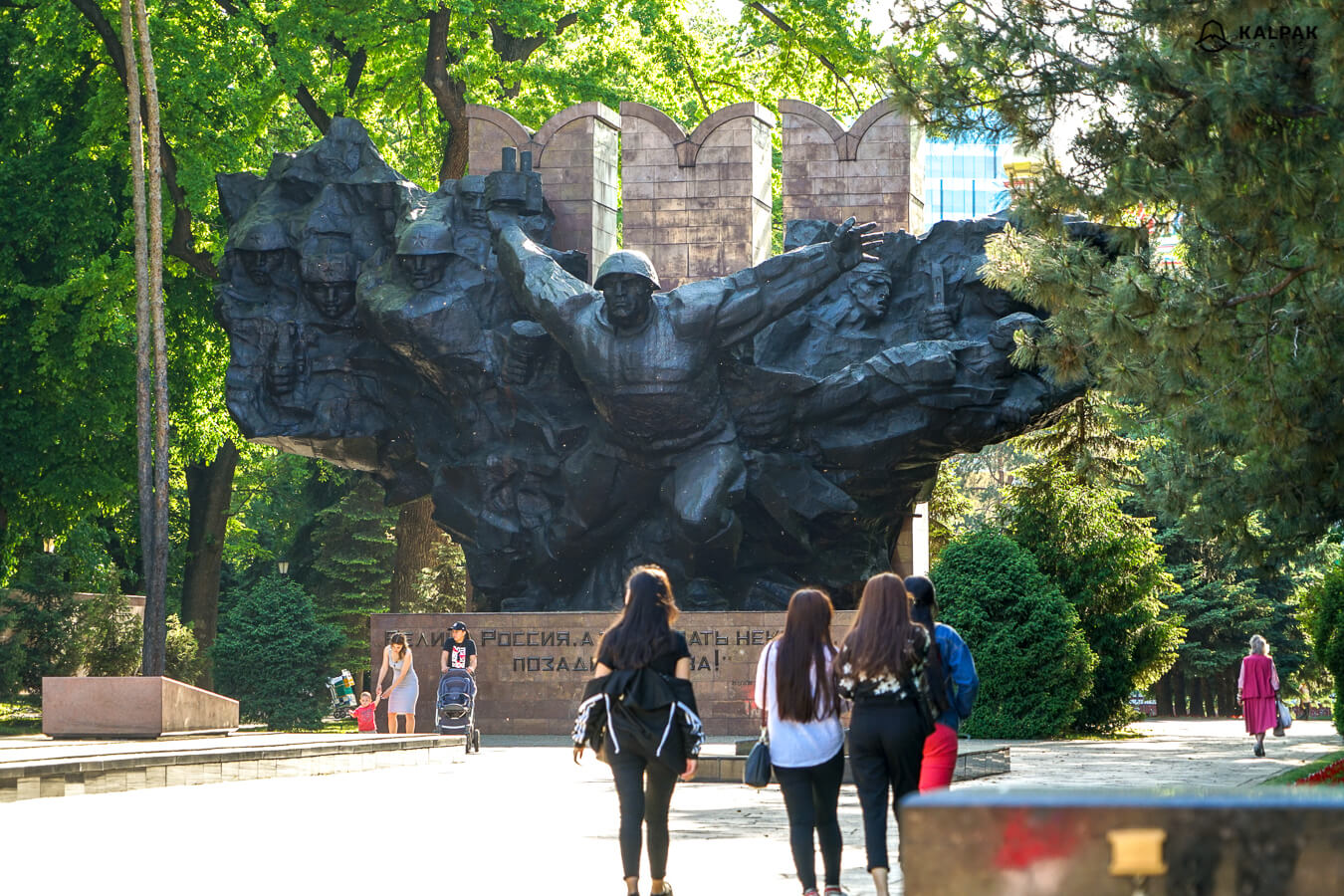 Green Bazaar is a central market in Almaty, full of fresh vegetables and fruits. You can try horse meat sausages, local delicacies or buy some spices. 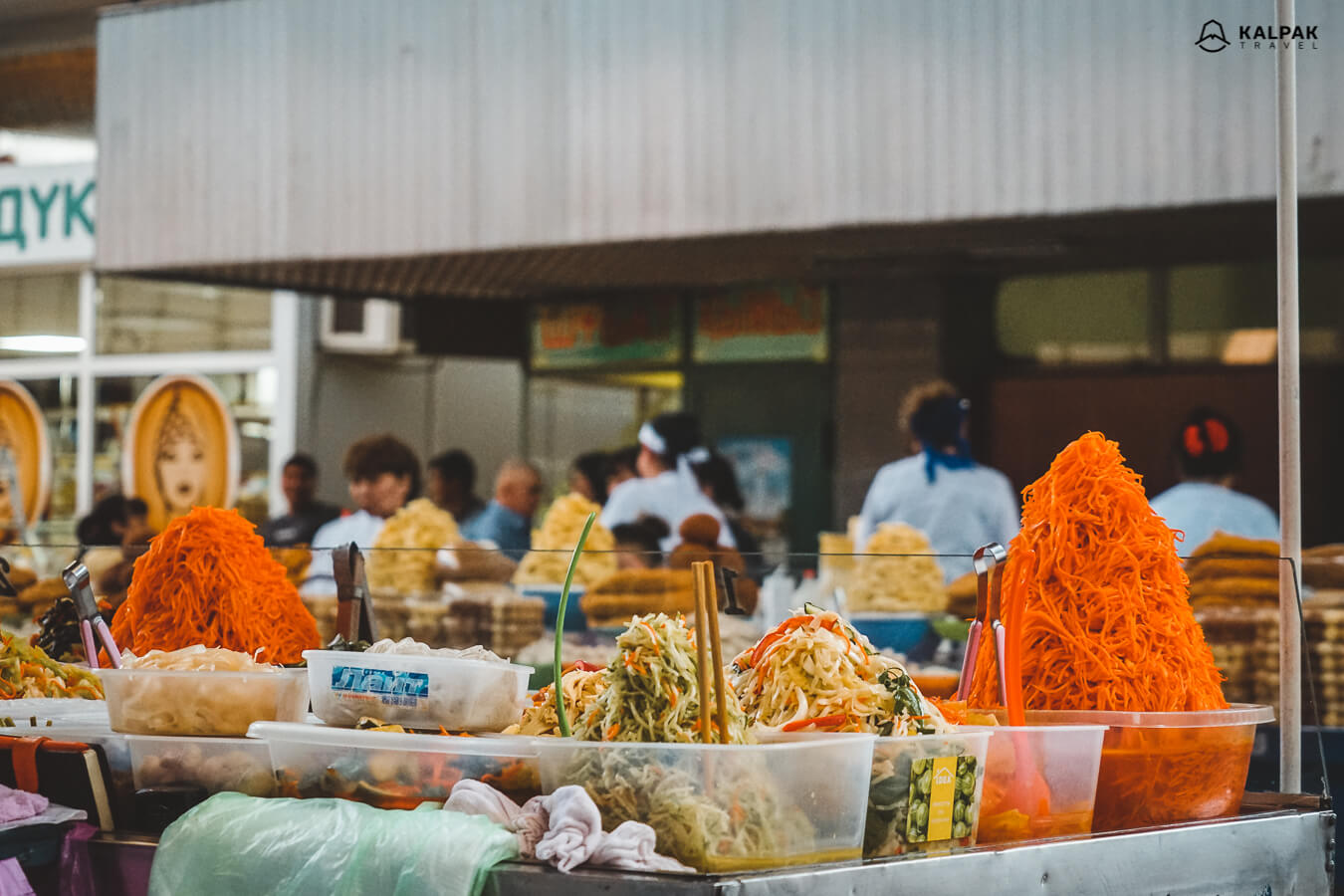 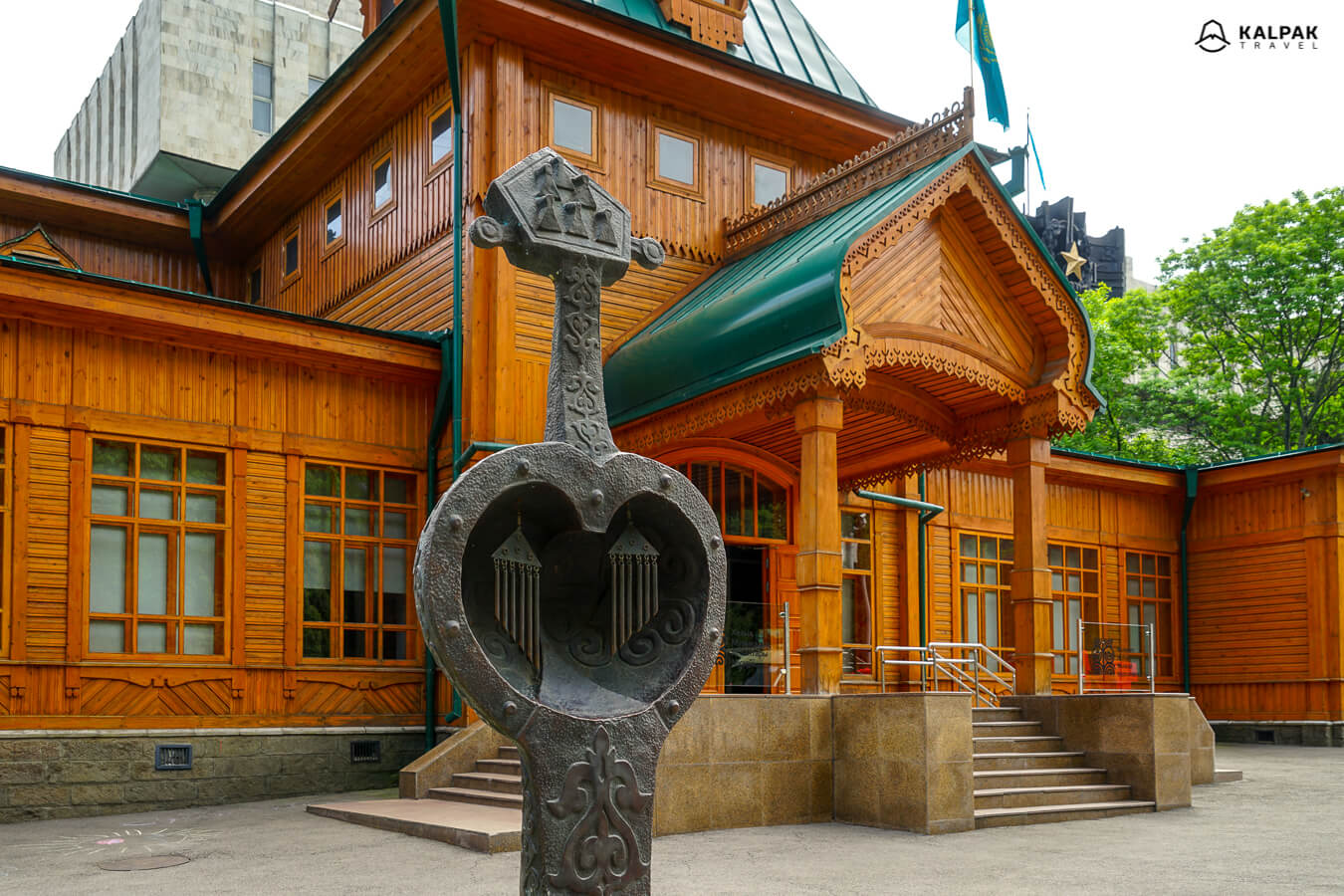 The Almaty metro was opened in 2011 and has only one line with 7 stations. Each metro station is beautifully decorated with different motives. This one below is called Zhibek Zholy, or the Silk Road and shows the map of the Silk Road through Kazakhstan. 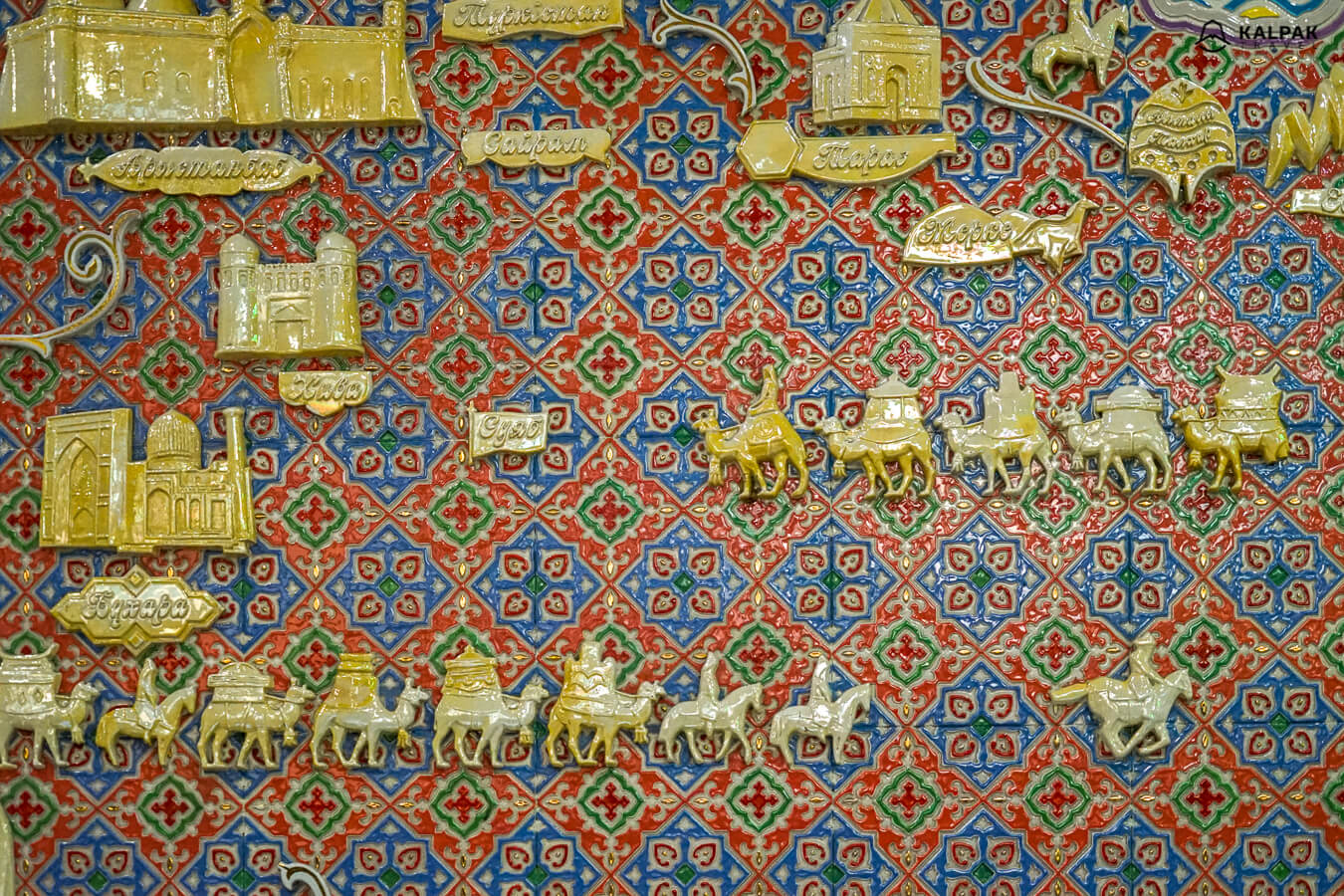 Museum of History of Almaty

This was opened in 2002, and it has a collection of more than 35,000 artifacts and tells the story of Almaty. 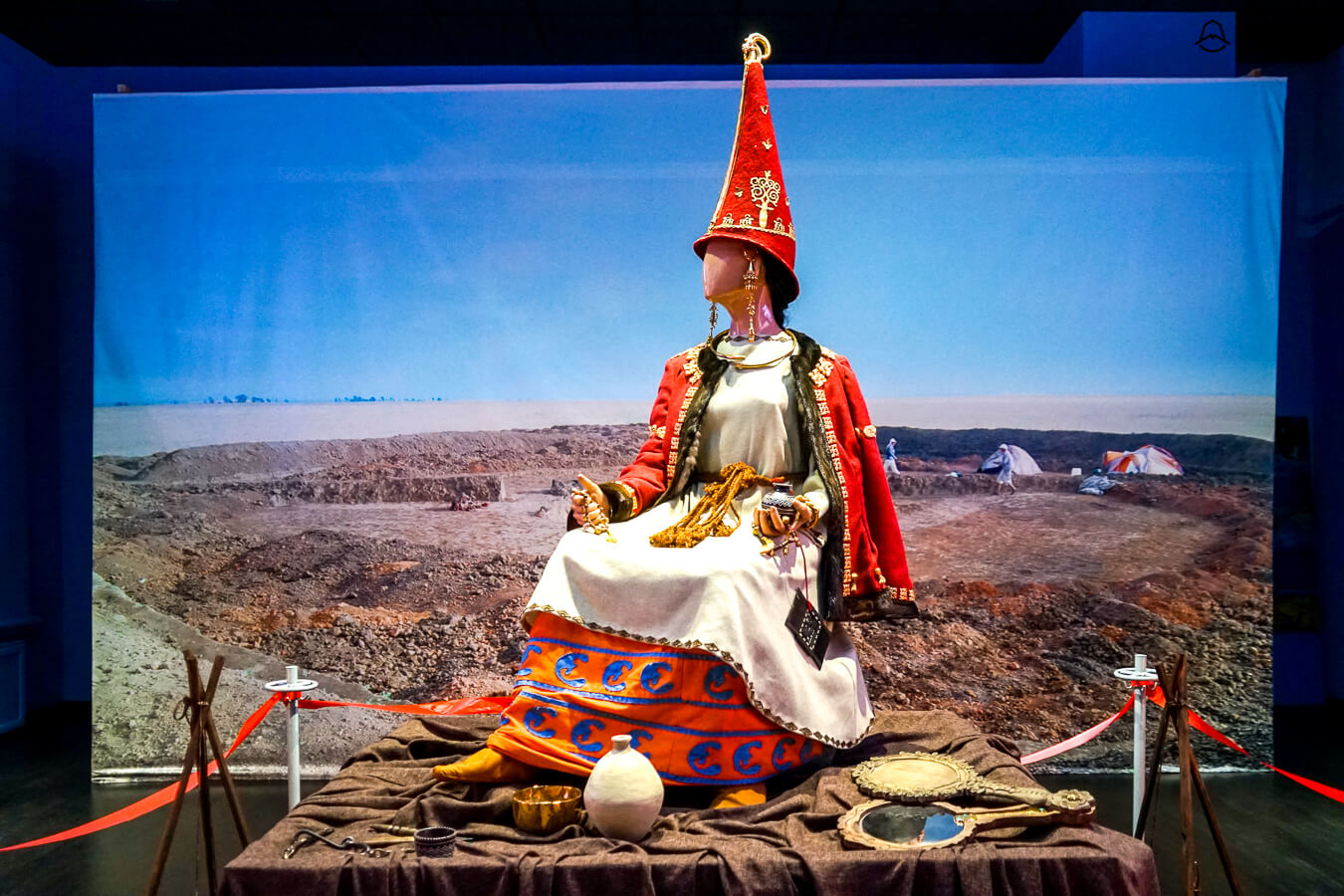 One of the famous landmarks of Almaty became Hotel Kazakhstan. It is a 102-meter tall building with 26 stores. It was built in 1977 and up until 2008 has been Almaty’s tallest building. 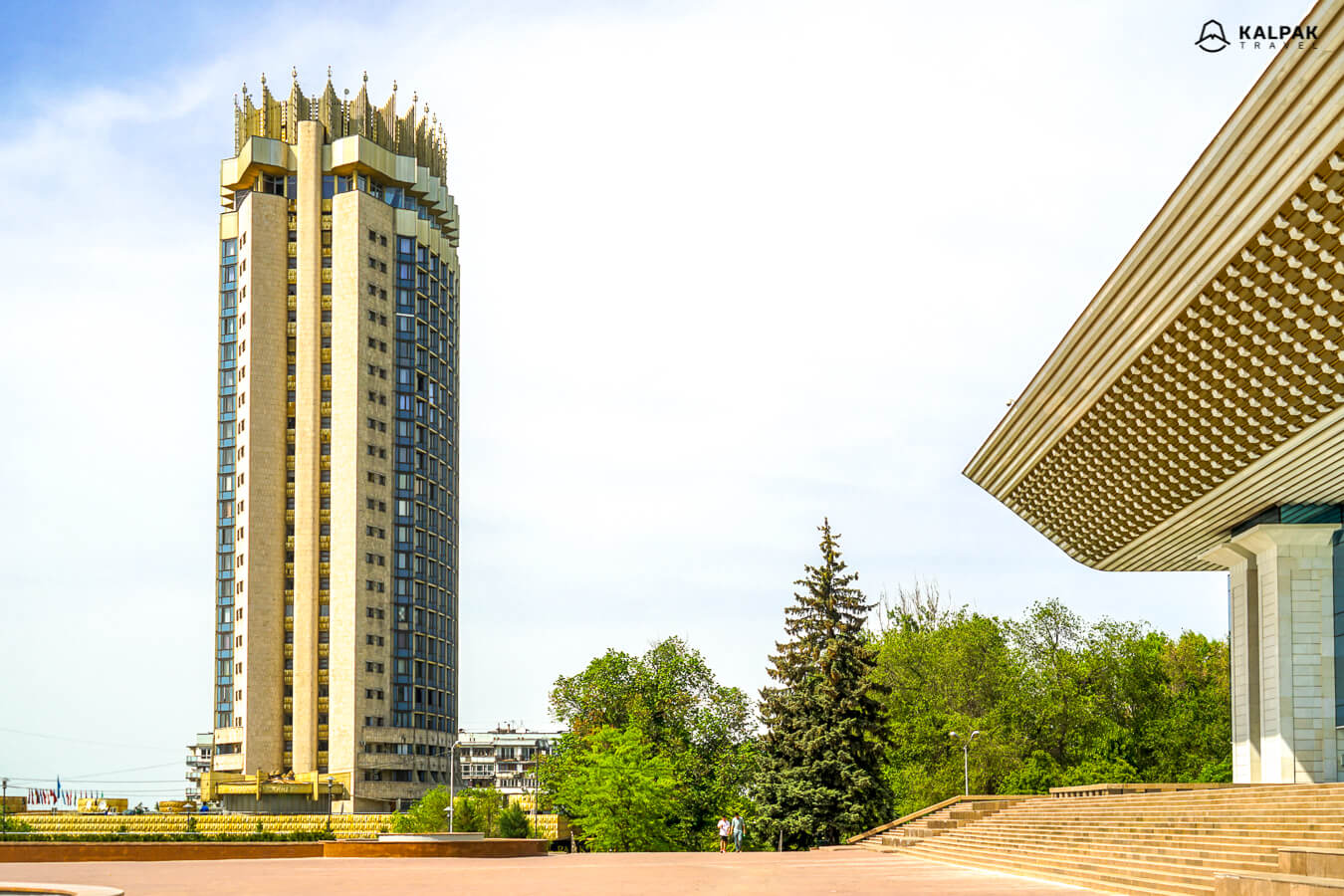 The building still raises high above the city with its golden crown. You can enjoy the view while getting to the top of the Kok Tobe Hill since the funicular station is located right next to the Hotel Kazakhstan. 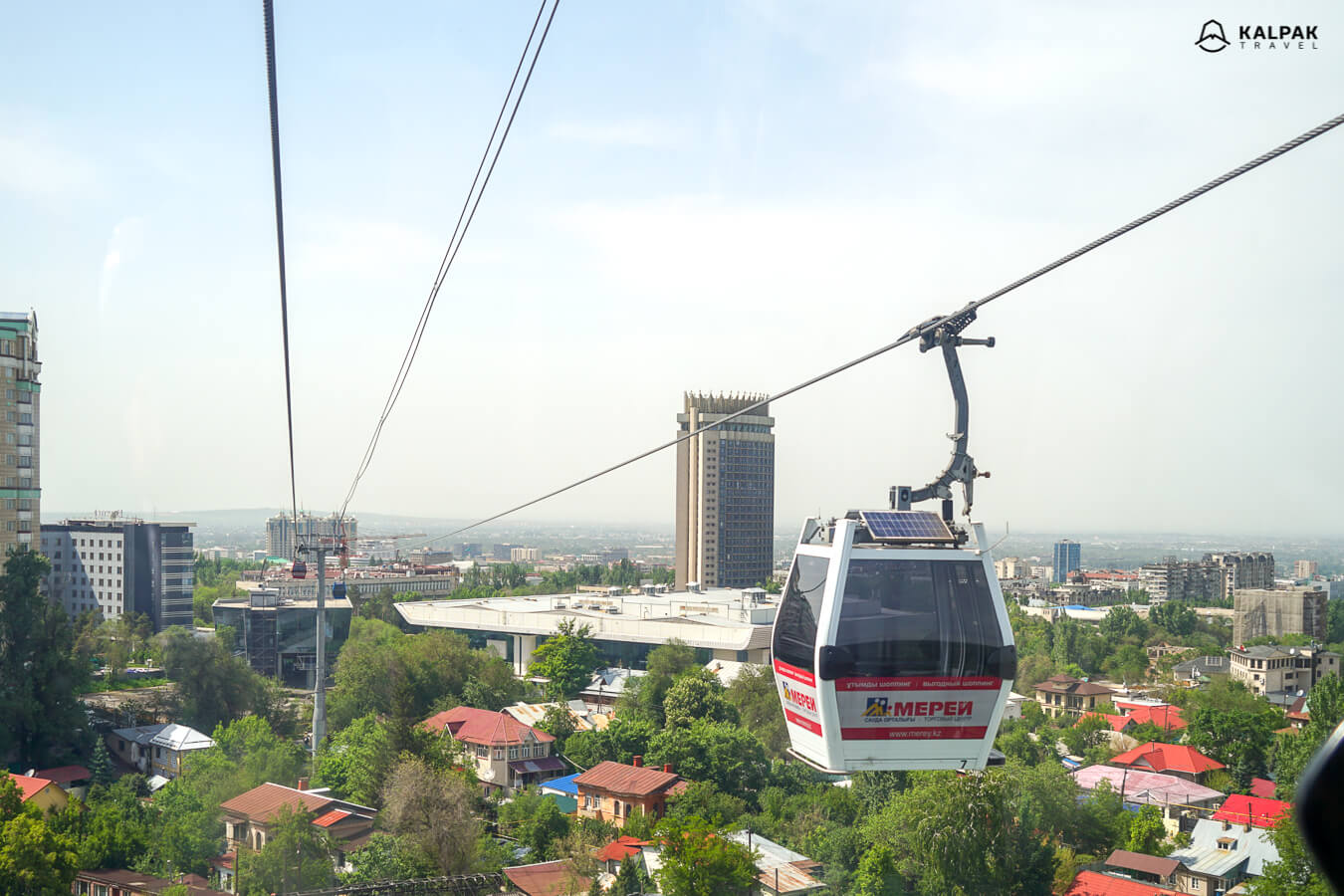 Kok Tobe Hill is 1,100 meters high and located in the eastern part of Almaty. You can get to its top on a funicular that was built in 1967. A television tower was built in 1983 and it is 371 meters high. After riding the 1,730 meter-long funicular, you can enjoy the view of the city on top of the hill. It is one of the travel highlights of Almaty both for locals and foreigners. In summer, there are occasional concerts or entertainment events. You can also visit the statue of the Beatles. Go out for food experience in a local entertainment park or just have a drink in green summer cafes. Kok Tobe is a nice place to enjoy summer evenings and enjoy the panoramic views of the city. It is a popular place for locals to go in the evening to watch the sunset and the night view of the city. In the evening, the temperature gets cooler and it is very pleasant to spend time there after a hot day in the city. 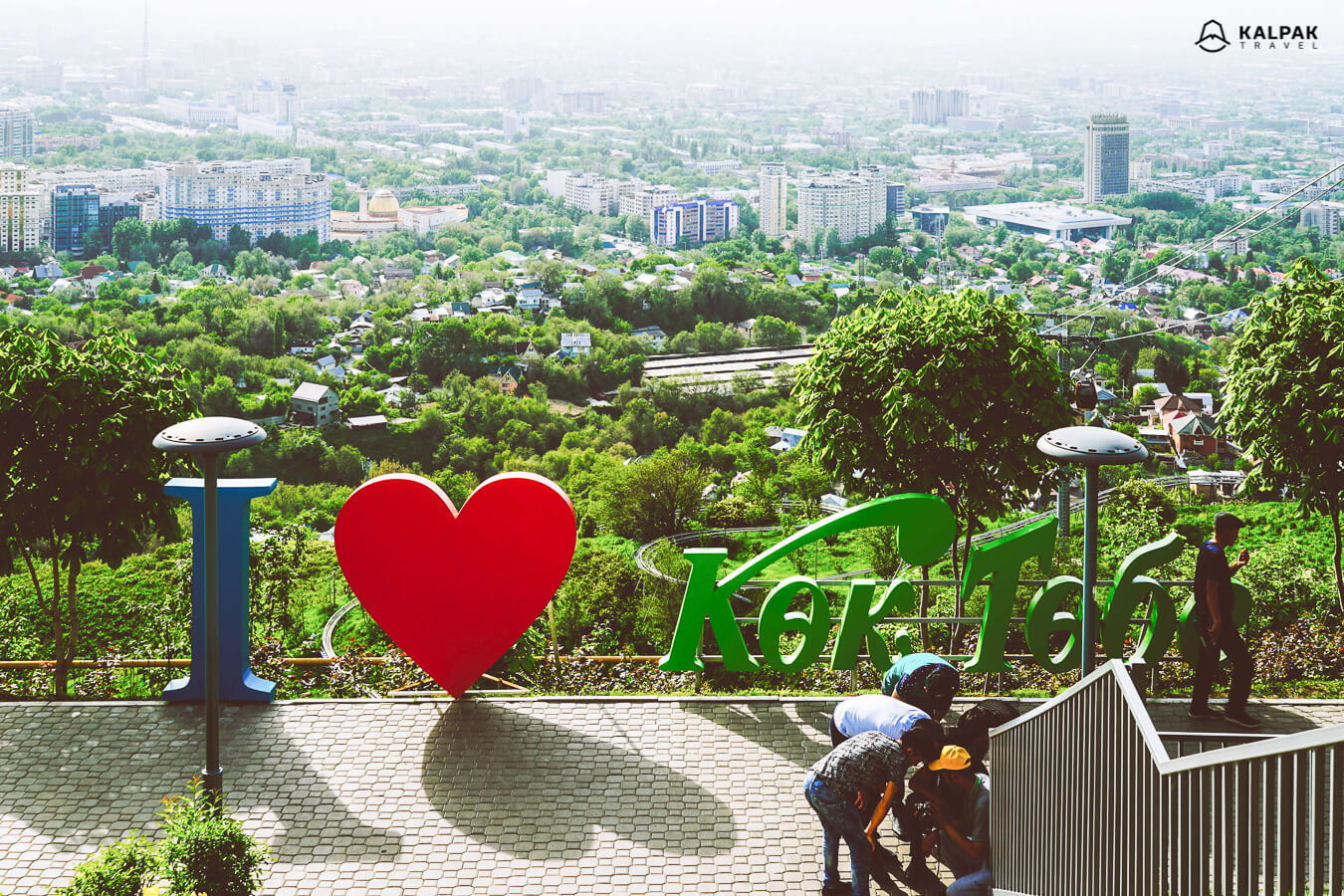 Since 1972, the population and guests of Almaty city can enjoy the public skating rank Medeo. The initial ice rank was constructed in 1951 and was used for competitions or training of athletes. It is located at 1,691 meters above sea level and it is one of the largest high-altitude ice ranks in the world. In the early 2000s, reconstruction was done and, in 2011, renovation before the Winter Asian Games. It is one of the most popular day trips from Almaty along with Shymbulak. 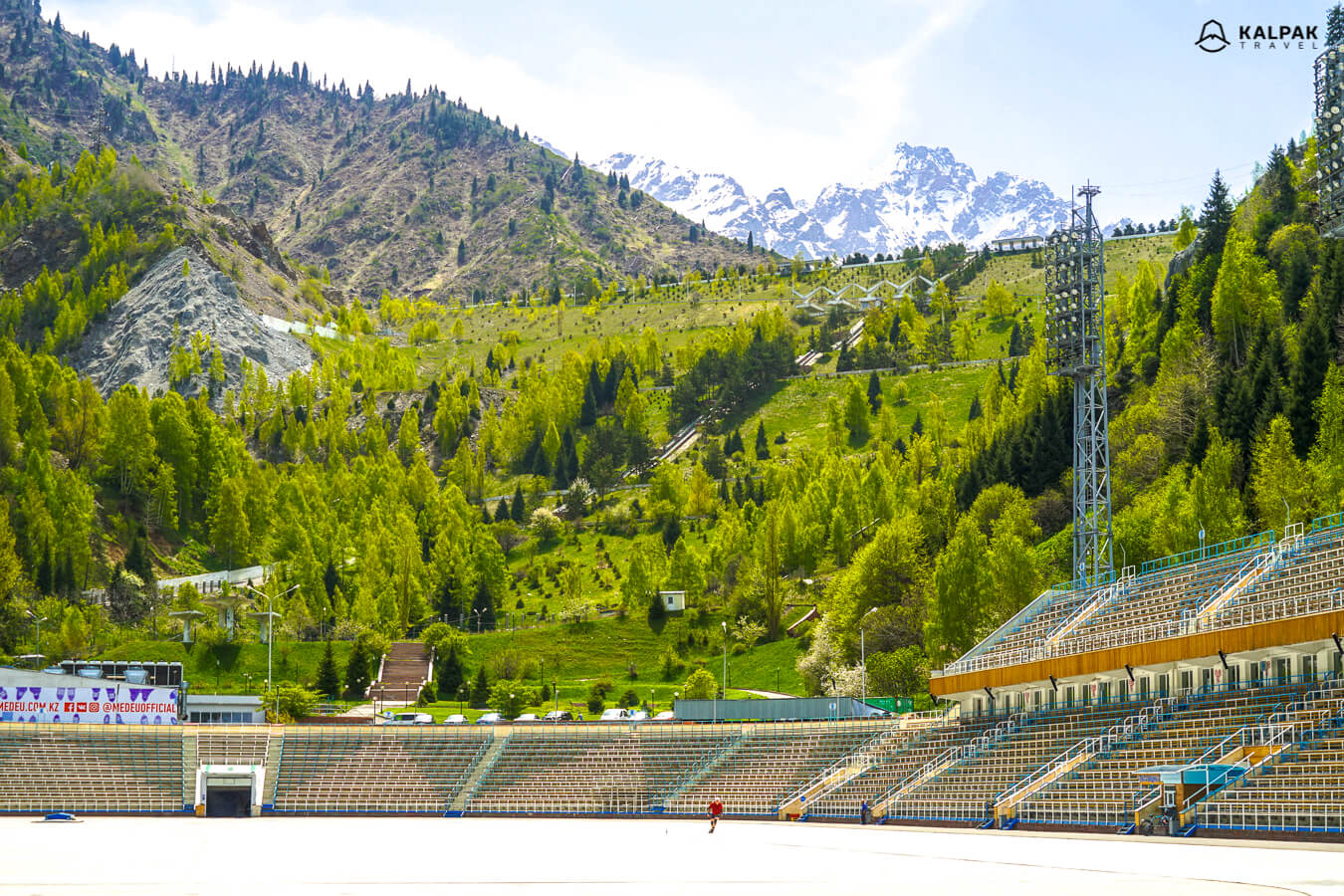 Since 2011, Shymbulak and Medeo have been connected by a funicular and can be visited all year-round. It is a popular ski resort compliant with international standards and in summer a popular place for hiking, biking or paragliding. This ski resort was opened in 1954 with a 4 -floor Soviet hotel that could accommodate around 200 guests. 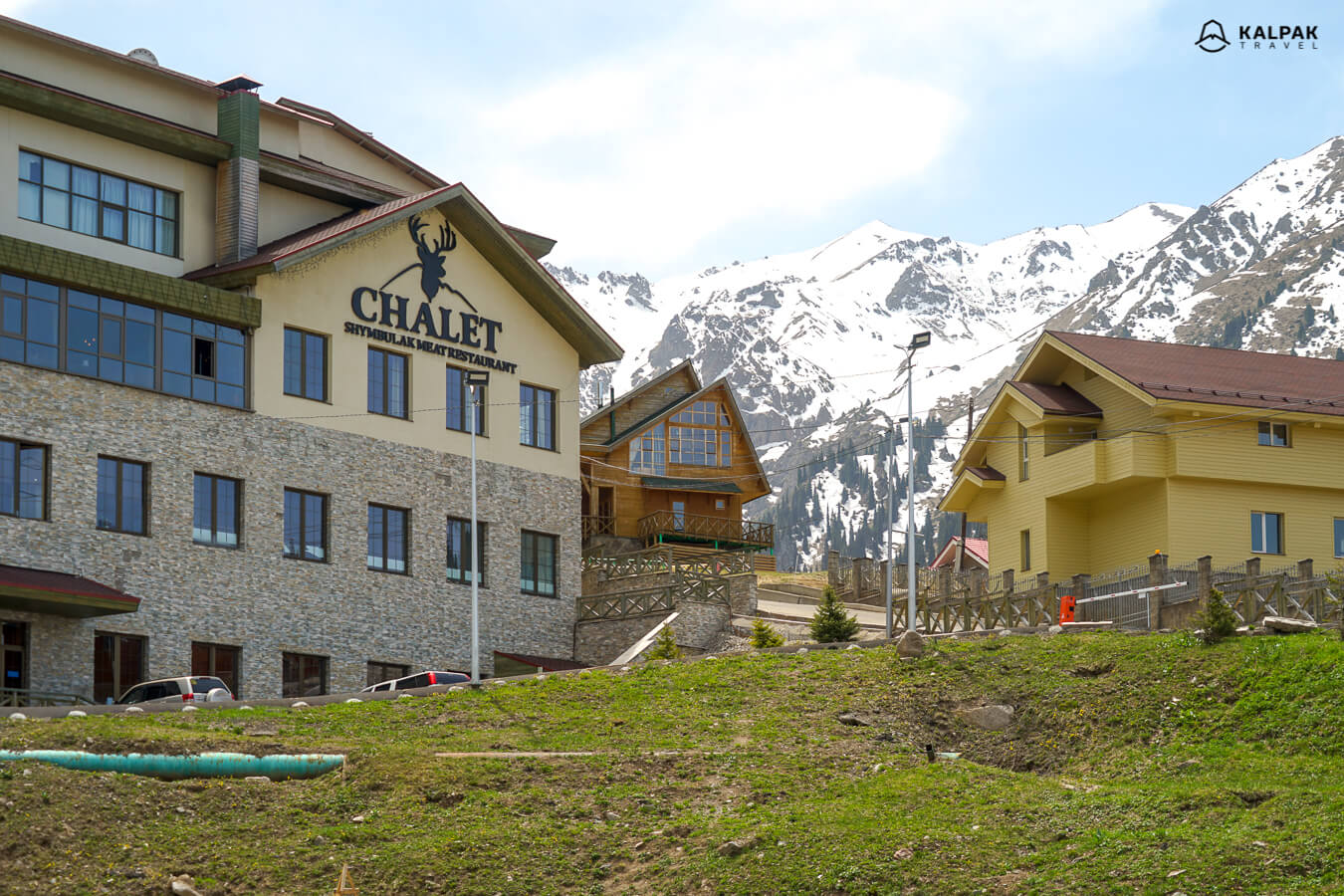 The earliest archeological findings on the territory of modern Almaty city dates back to 7th–3rd century BC. It was inhabited by the ancient nomadic Scythian/Saka and Wusun tribes. From the 8th to the 13th centuries, it was one of the stops on the Silk Road. In the 13th century, it was conquered by the Mongols and was slowly abandoned and lost its importance. At the place of earlier settlements, called known as Almatu or Almatau, the Russians established Fort Vernyi. Since then, it has constantly grown in size and developed. 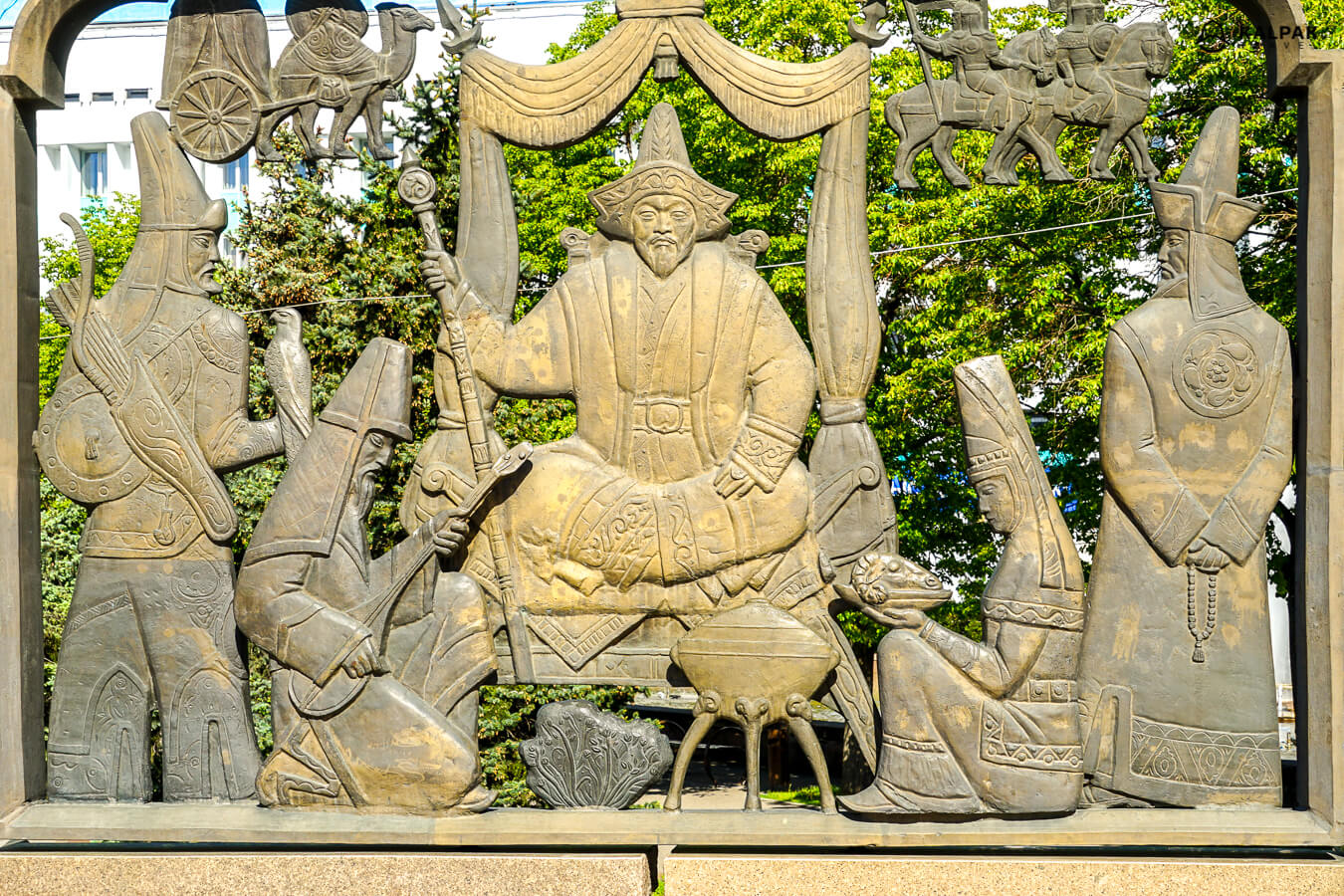 Almaty – what does it mean?

Its name is derived from the word apple. Apple translated to the Kazakh language means alma. It is not a coincidence that the name of the city comes from apples; it is believed that apples originated in this region and one can still find wild apples in the Almaty region. If you have more time in Almaty you can also visit:

This building was constructed between 1936 to 1941 by architects N. A. Prostakov and T. K. Basenov. However, the theatre of opera & ballet was established already in 1934 with a performance of the musical comedy “Ayman-Sholpan” written by Mukhtar Auezov. Auezov was a Soviet writer, playwright, and scientist. First Kazakh ballet performance was staged in 1938  and was called «Kaklaman & Mamyr.» It is still a very popular place to watch a classic ballet or get to know folk stories through ballet. You can also have a look at 3D Tour on their website to have a glimpse of its inner decor. 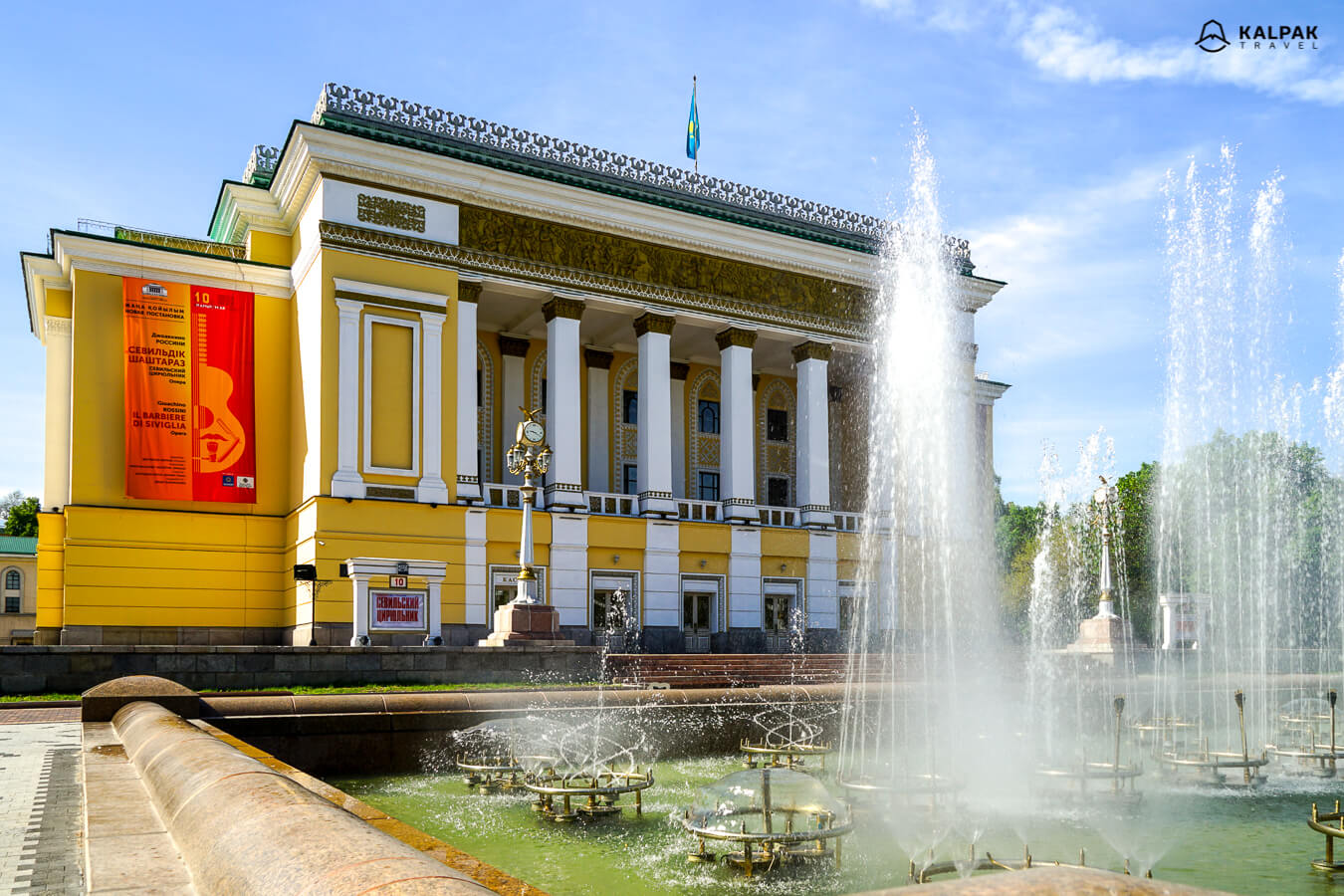 If you walk along this street, there is a new Panfilov alley with benches, playgrounds and different eating places to enjoy the city on foot. In the evening you will see much more people than during the day and it became one of the favorite places for locals to enjoy the summer evenings. Right across the street from Theatre of Opera & Ballet there is Almaty Hotel. If you walk there you can see mosaics on its outer wall. Mosaics reflect different aspects of Almaty, its nomad and Silk Road history as well as Kazakh culture and legends. 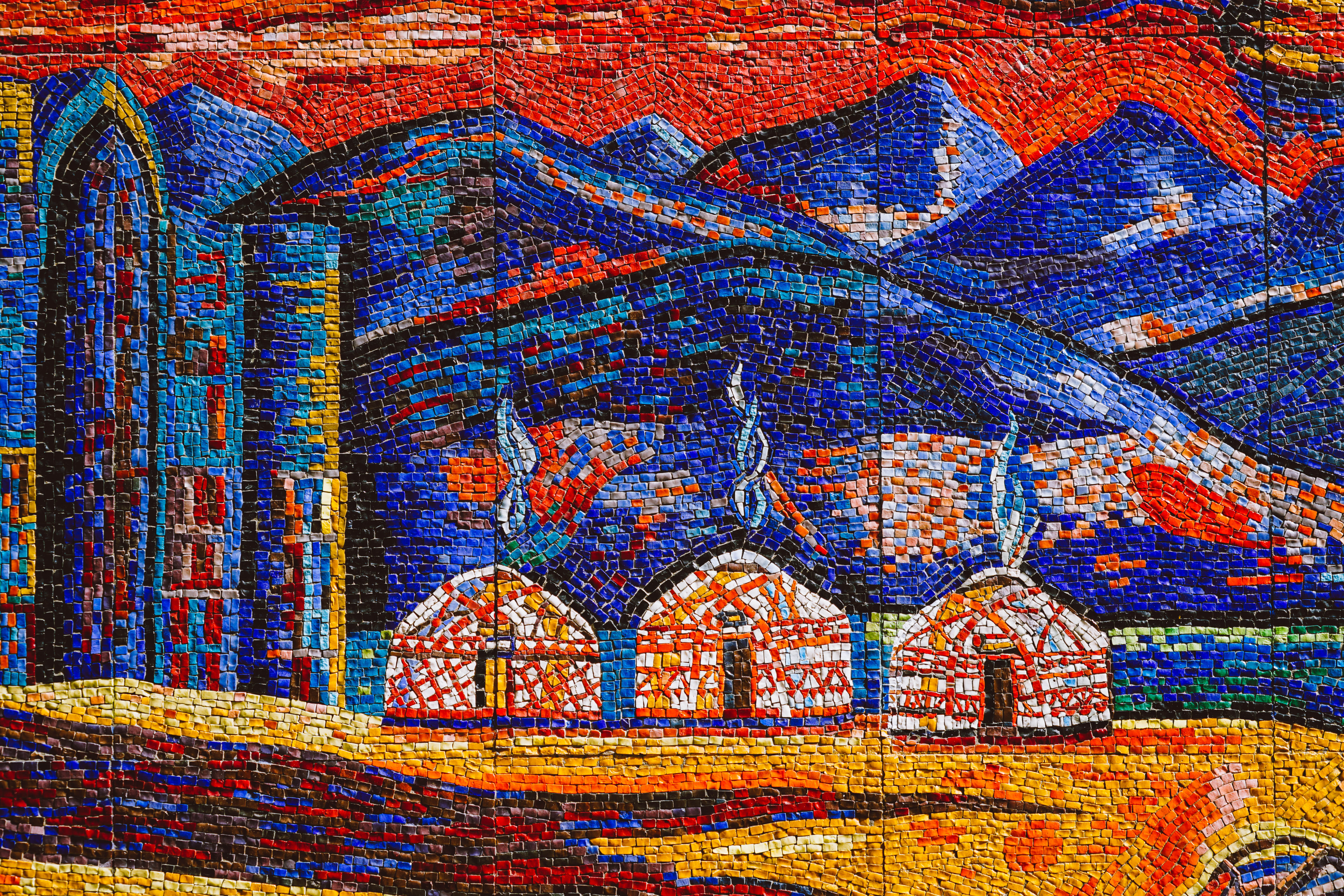 If you keep walking on Panfilov street you will come to the Arbat passage. It is a passage of modern stores and cafes, as well as ZUM (Central shop) or literally central shop of the city. During the day you can see some local painting exhibitions or even order your own caricature or painting. In the evenings there is some street music and a pleasant atmosphere to walk around. This is one of the oldest museums in Kazakhstan and has more than 300,000 artifacts. Between 1929 and 1985, the museum was located in the Holy Ascension cathedral, also commonly known as Zenkov cathedral. Since 1985, it has been located in a new large building. In Almaty, there are 26 museums that can be visited during longer stays in the city; however, many of the smaller museums have information only in Russian.

The monument of Independence and the Republic Square

The independence monument is located on the Republic Square and is 34 meters high. It was designed by Shota Valihanov and his team. The statue of a Golden Man on top is 6 meters high. He is placed on a winged snow leopard known from Kazakh folklore tales and holds a steppe eagle at his right hand and a bow in his left hand. The statue refers to the rich nomadic past and symbolizes prosperity, growth, and stability as an independent state. 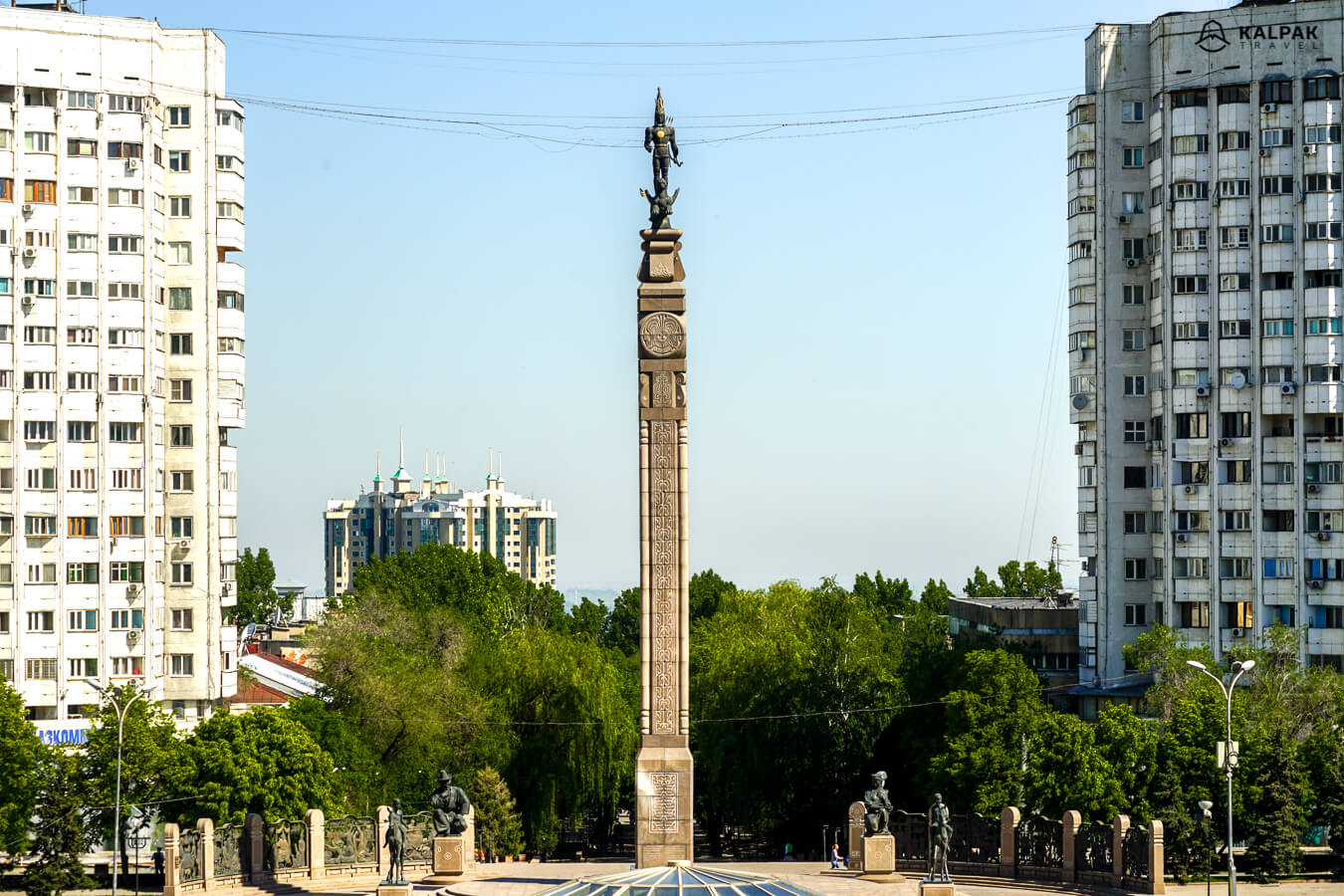 There are also many city signs and free audio guides to explore the city by yourself. You can get for example downloadable official audio guide on izi.Travel. If you love guided tours, travel with one of our Kazakhstan Tours or arrange your own customized Kalpak Travel private tour.

What is it like to be an architect in Astana? What is the main difference between Soviet and modern architecture? How does he like the modern look & feel of Astana compared to Soviet Tselinograd? Read the exclusive interview to find out.