Bishkek in One Day

Listen to stories behind Bishkek's most beloved landmarks and monuments.

For this city tour you will have an excellent guide and historian who will tell you the stories behind Bishkek’s landmarks and monuments. 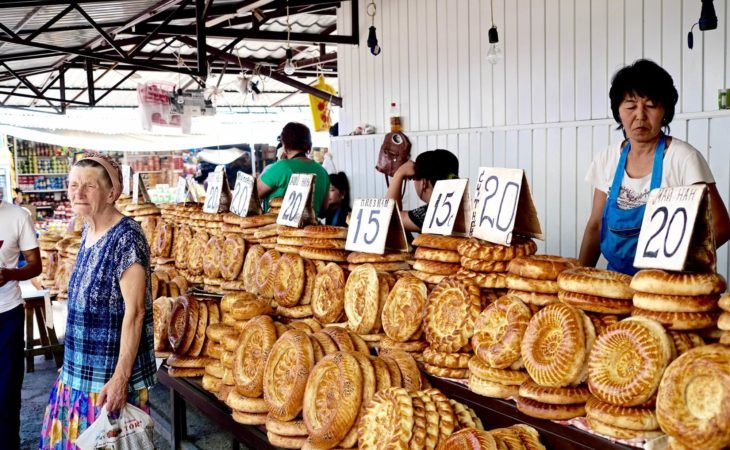 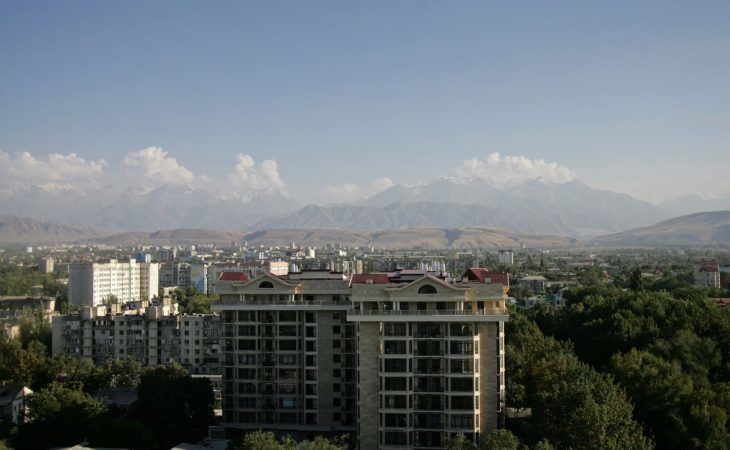 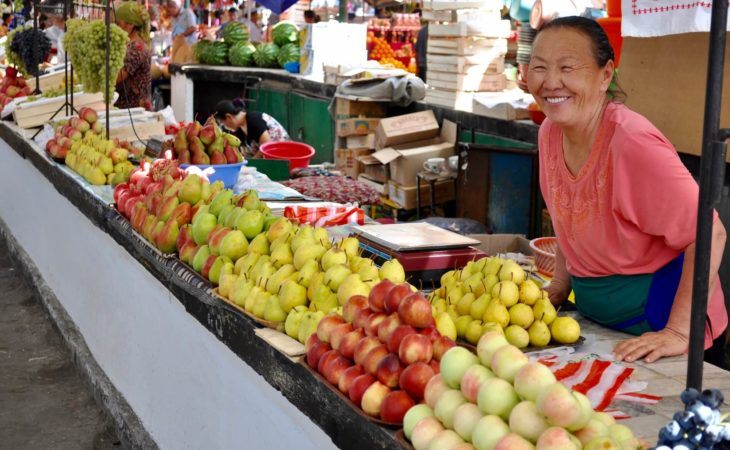 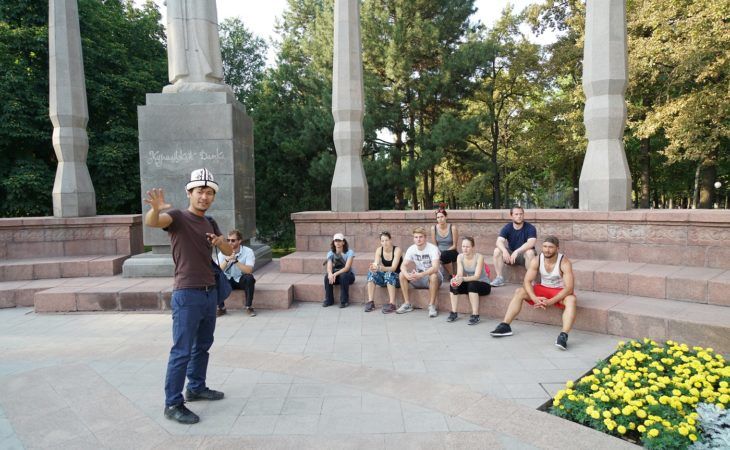 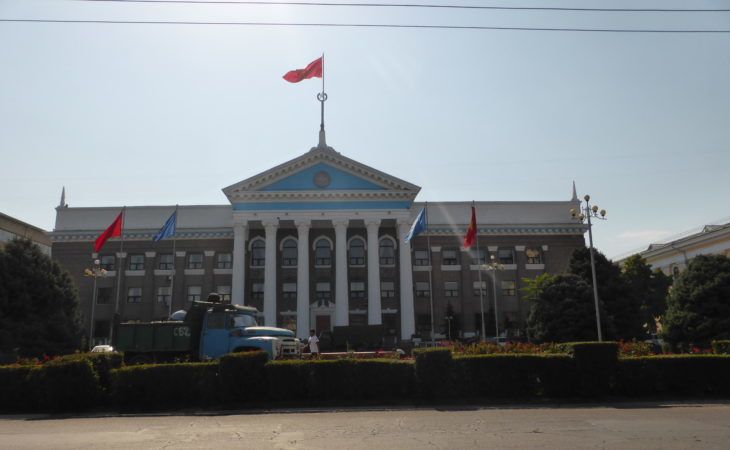 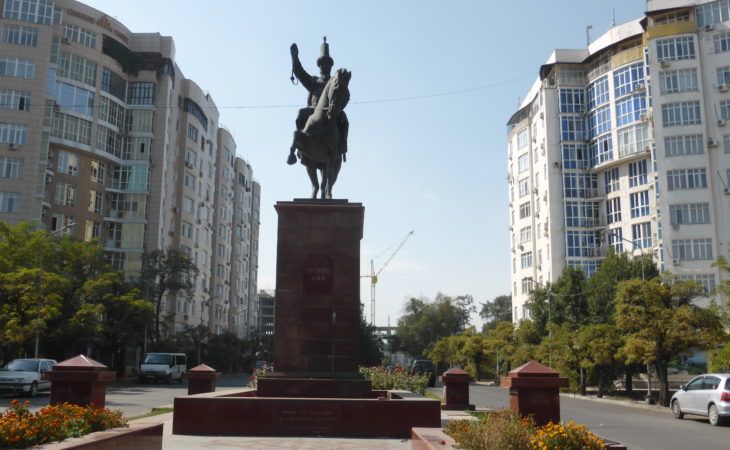 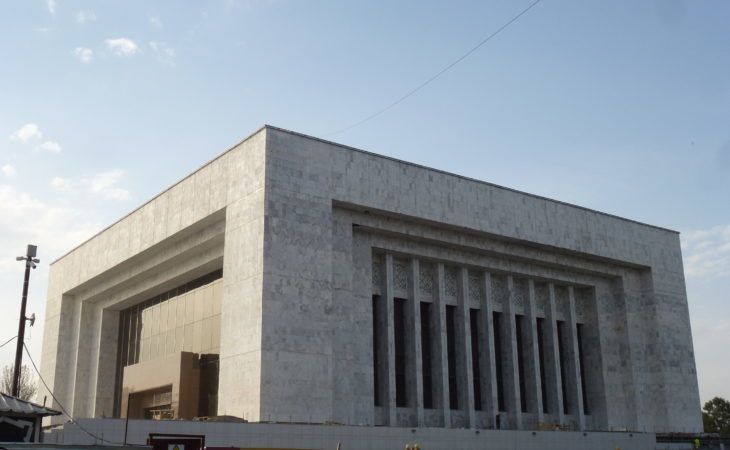 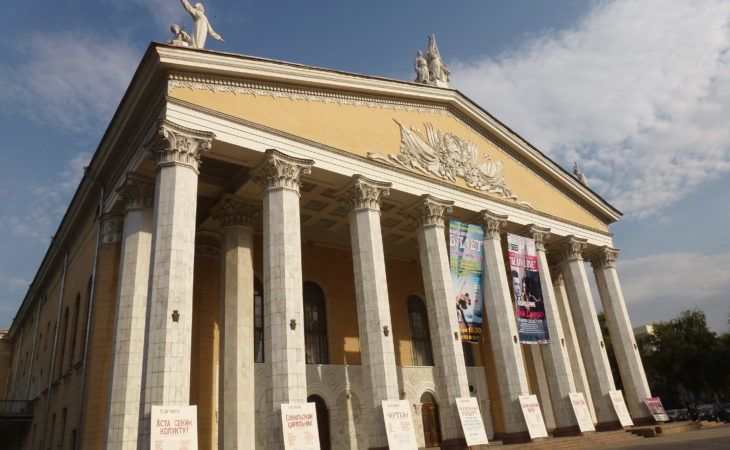 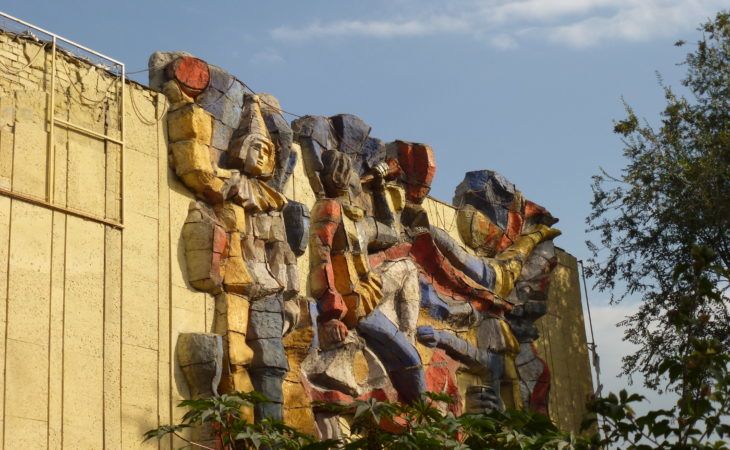 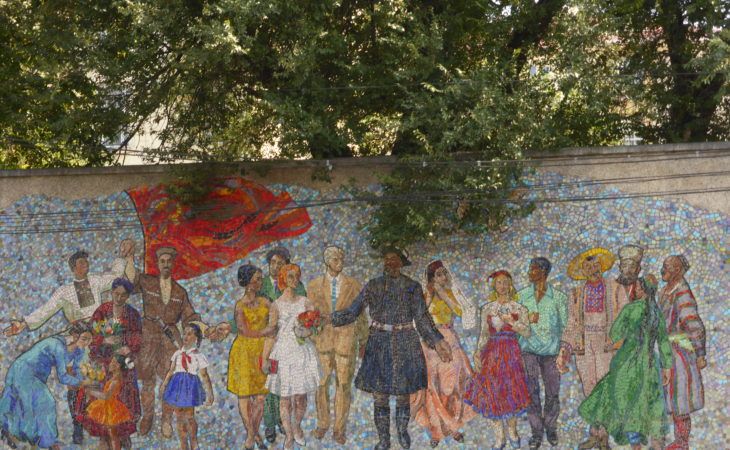 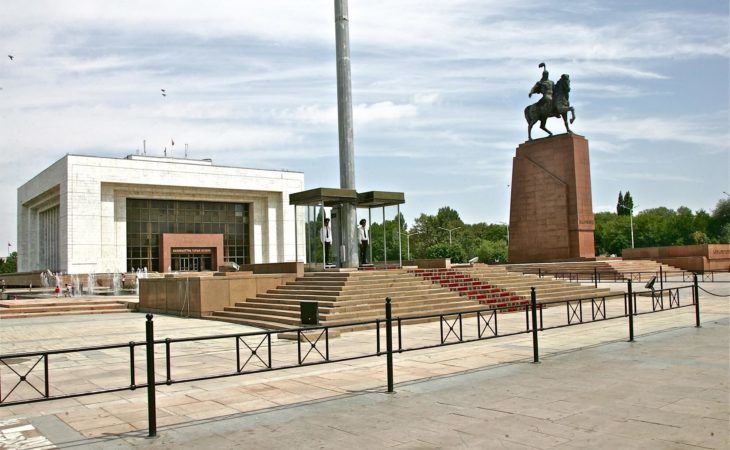 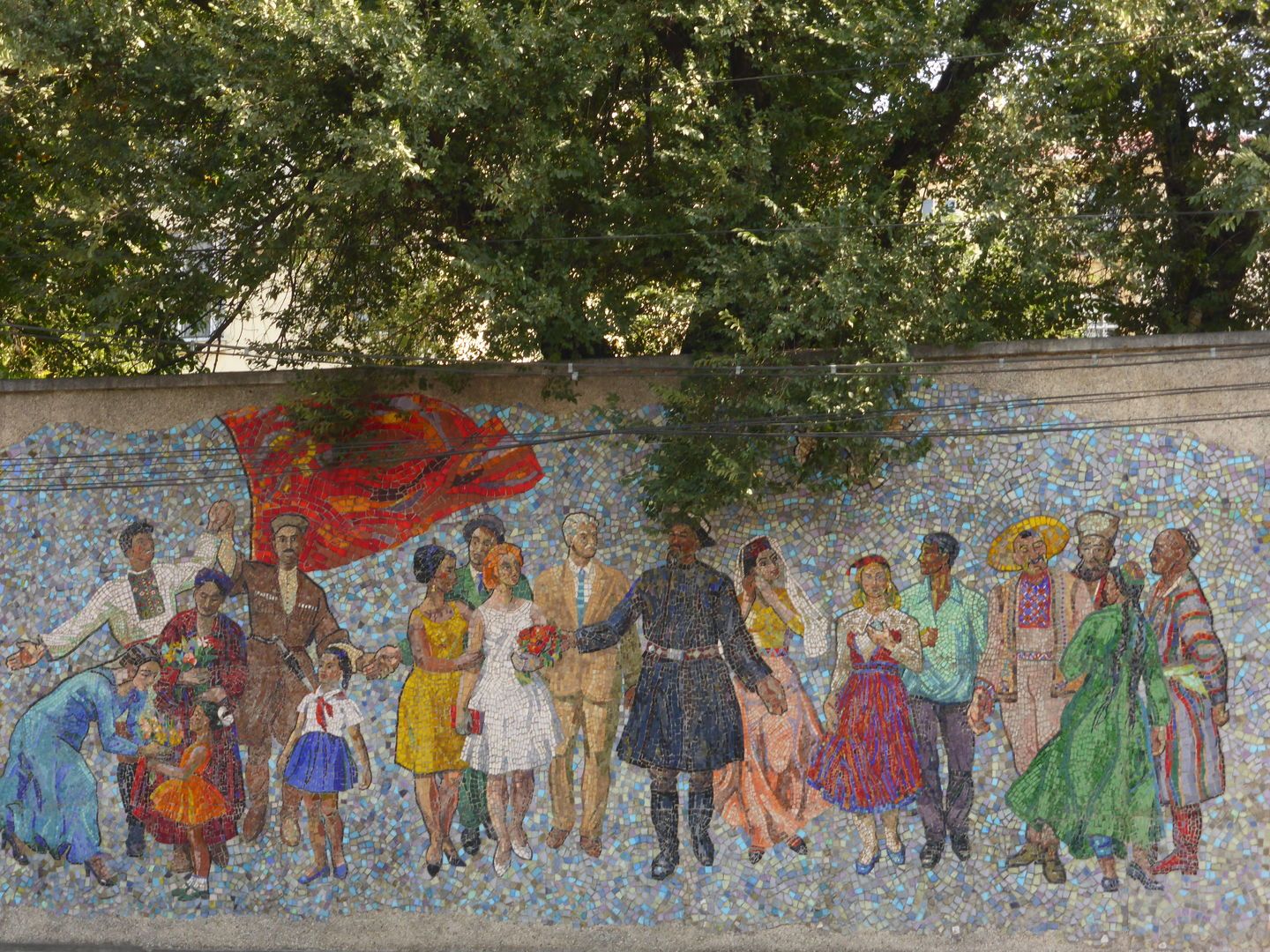 Before the Soviet Union Bishkek was a small village bazar where nomadic people would trade goods with one another.  Once the Russian Empire arrived in the area they build a garrison called Pishpek and started controlling and collecting tributes from nomadic tribes.  After the Soviet Revolution in 1917 everything changed.  Kyrgyz people settled into cities and the Soviets invested a lot in Kyrgyzstan and especially in Bishkek.  They built the greenest city in the Soviet Union and lined all the streets with trees which makes it a very pleasant city to explore on foot and that’s exactly what we will do.

At 9:00am we will meet at Ala Too Square. We will start with a walking tour that includes stops at the museum, Oak Park (the oldest park in Bishkek), Central Square and the Philharmonic Hall.  Later, amble through more of the city’s charming parks and listen as your guide recounts the stories behind its most beloved landmarks and monuments. We will then drive to Osh bazaar, the central market of Bishkek, where you can buy souvenirs or literally anything else. The day will end with a visit to the panorama view point at the outskirts of the city. At 5:00pm the tour ends.

Tour starts at 9:00 AM on Ala Too Square on Bishkek and will last whole day until 5:00 PM. Lunch is not included in the price.

This tour is managed by Kalpak Travel in Kyrgyzstan.

The Kyrgyz currency is called the Som (KGS). In the capital Bishkek there are many ATMs that you can find in shopping centers, supermarkets or on the main streets. All of them accept Visa cards and some, like Kyrgyz Kommerts Bank, Demir Bank and Uni Credit accept other cards such as MasterCard or Maestro card. Outside of Bishkek, we don’t recommend relying on ATMs as there are so few of them. We also recommend that you bring some cash in new USD banknotes of denominations of at least 20 USD. There are many exchange offices, some working 24/7. Small and old-looking bank notes are harder to exchange. Paying directly with a credit card is still not possible at most places, except for high-end restaurants, hotels and a small number of international stores. An emergency fund of around 500 USD in cash is always good to have during guided trips to Central Asia.

Kyrgyzstan is the most liberal and democratic country in the Central Asian region. For the last seven years, the political situation in the country has been calm and there is nothing to suggest that this situation might change. Guests and locals are treated with respect and the whole country can be regarded as very safe destination for travelers. That said, you are advised to wear a money belt, watch your belongings, avoid dark streets at night and only use official taxis. Your safety is our first priority at Kalpak Travel; we know and regularly assess all our Kyrgyz partners and we closely monitor political events.

Citizens of most Western countries do not need a visa for a stay of up to 60 days in Kyrgyzstan. To be sure whether you need a visa or not you can check on www.thevisamachine.com. Any special permits that you might need for access to places that will be visited during your tour, we will provide to you free of charge.
As soon as we receive your deposit payment, we will confirm your booking and send you an email with important pre-departure information. Please read it carefully as it contains important information on customs regulations for Kyrgyzstan.

The climate of Kyrgyzstan is continental and dry in the majority of the country, including the largest cities. In the Ferghana Valley in the south and in capital Bishkek, summers are very hot with day temperatures between 30° and 40° Celsius. However, most of the country is situated more than 1500 meters above the sea level, where temperatures are in the mid-20s during summer. At high altitudes of 3000 meters or more it may even snow overnight during the summer, so make sure you bring some warm clothes. The best season to visit for activity or jeep tours would be in summer and winter for skiing tours. Please note, weather in some mountain areas may be very changeable.

Do not drink water, unless it is bottled, filtered or boiled. Do not use tap water for brushing teeth or making ice either. Do not eat ice cream. Only eat well-cooked meat and fish, preferably served hot. Vegetables should be cooked and fruit peeled. If you follow these basic rules, you are likely to avoid any health issues like traveler’s diarrhea. Diphtheria, Hepatitis A and Tetanus are recommended vaccinations for Kyrgyzstan. Ensure you are fully insured for medical emergencies including repatriation. Medical services in Kyrgyzstan are basic at best.