Kyrgyzstan is one of the most beautiful countries in Central Asia. Our list of top ten places to see in Kyrgyzstan includes gorgeous wild mountain pastures inhabited by modern semi-nomads living in summer yurts, as well as large alpine lakes dotting a landscape characterized by charming villages.  The cities are Soviet planned with some modern buildings and a diverse population.  It’s these contrasts that make the country such a rewarding one to travel within. Here are our picks for what should go to the top of your Kyrgyzstan bucket list. 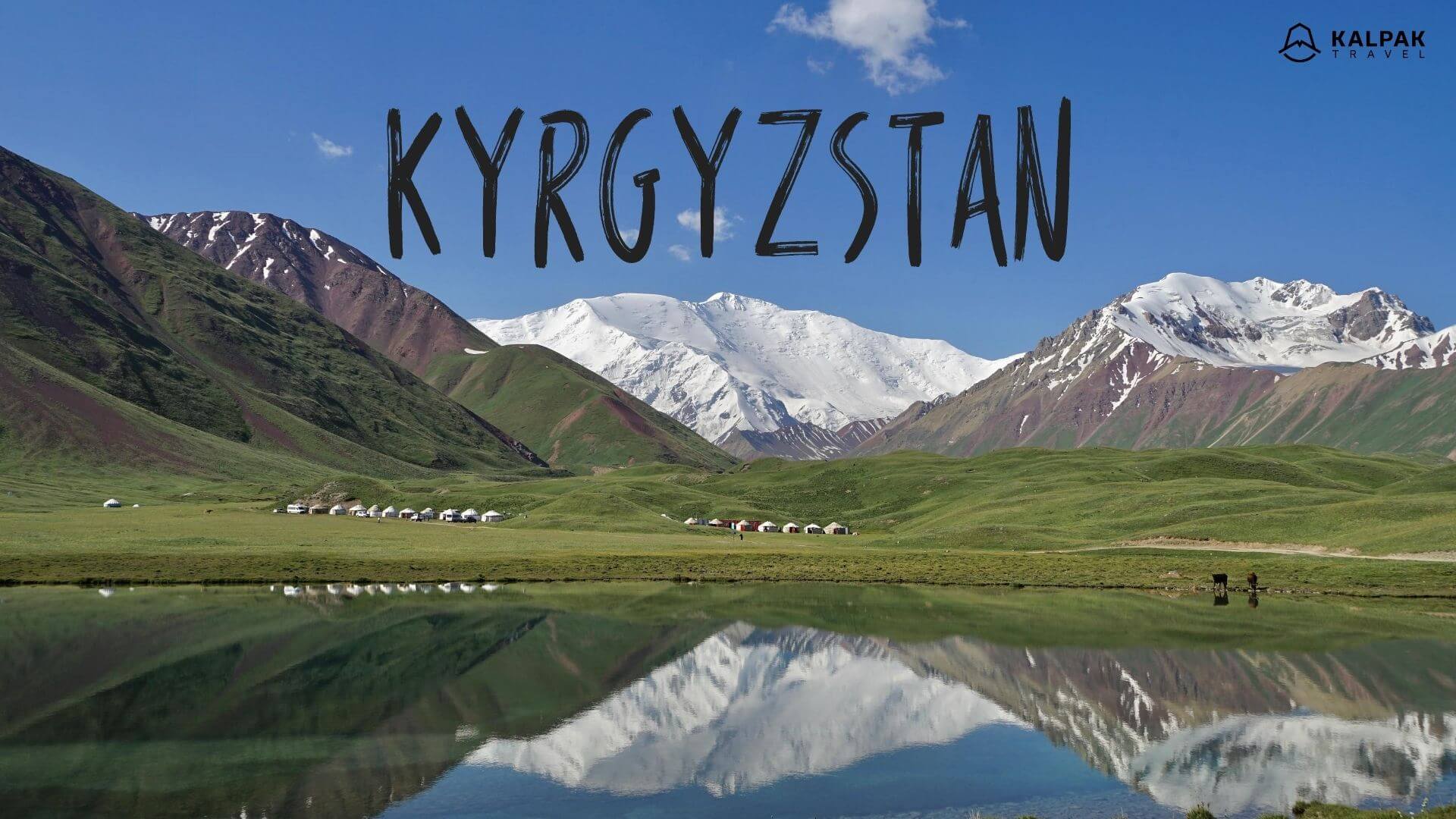 Issyk-Kul means “hot lake” translated from Kyrgyz. It is a salty and mineral-rich lake that does not freeze even in the coldest of winters. More than a hundred rivers flow into lake yet not one of them flows out.  It is the second-largest mountain lake in the world, located at an altitude of 1607 meters and at its maximum, a depth of 668 meters.  To give you an idea of the scale of the lake, it takes about nine hours to circumnavigate by car.  If you take a tour of Issyk Kul, why not stop at Balykchy, Bokonbaevo, Barskon, or Cholpon Ata?  Wherever you stop, you can’t fail to notice the stunning backdrop.  Issyk Kul is surrounded by the Ala -Too Mountains, part of the Tian Shan range.  There are several local legends about how the lake appeared, but we won’t spoil the surprise. 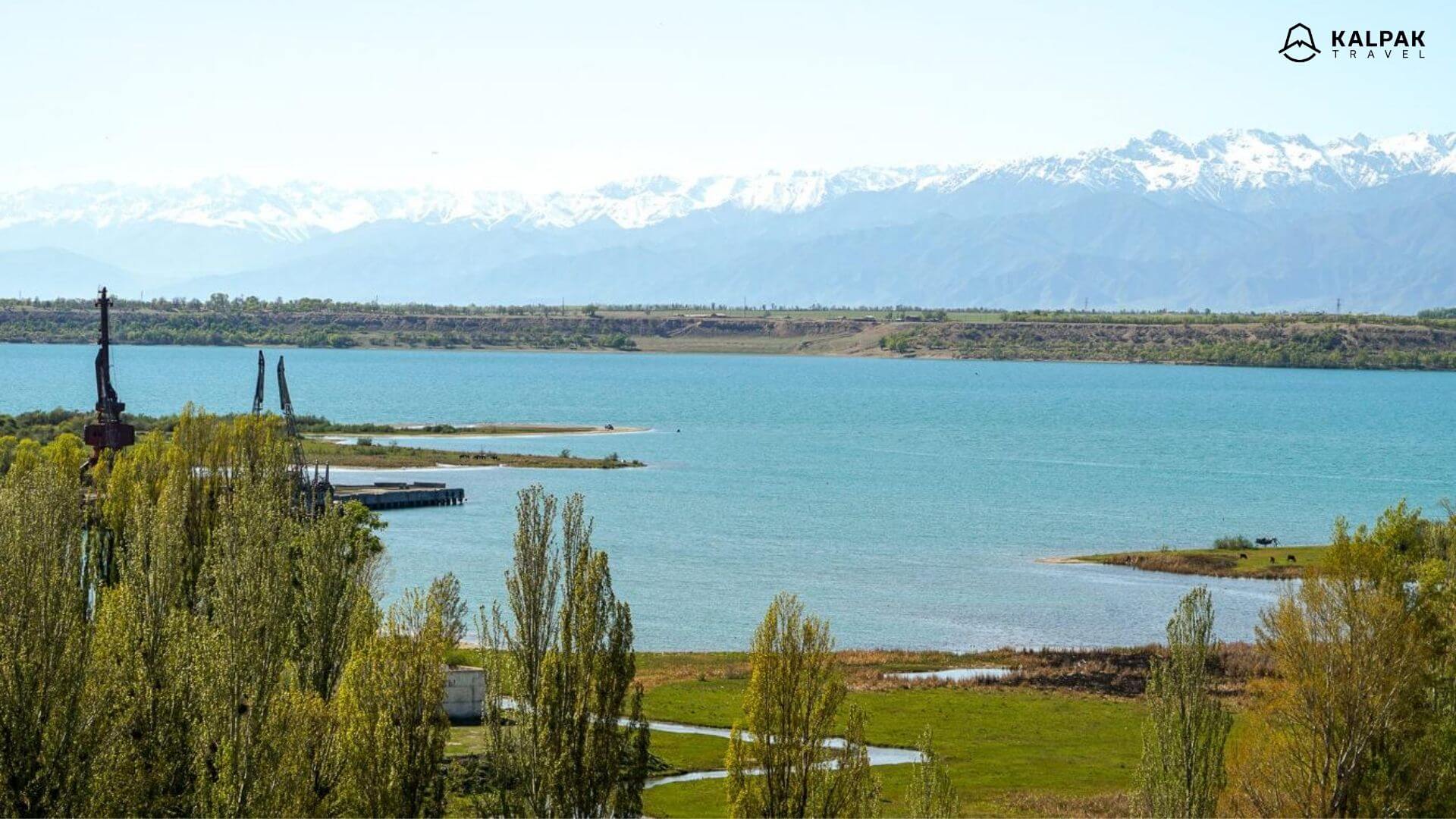 Bishkek is the capital of Kyrgyzstan.  It has a variety of eating places with everything from traditional Central Asian dishes to international cuisine and fast food. A Bishkek city tour will reveal the nomad, Soviet and modern influences on the development of the country. You can stroll around in many green alleys of the city, shop in bazaars for local produce and explore its many statues as you make your way around the city. 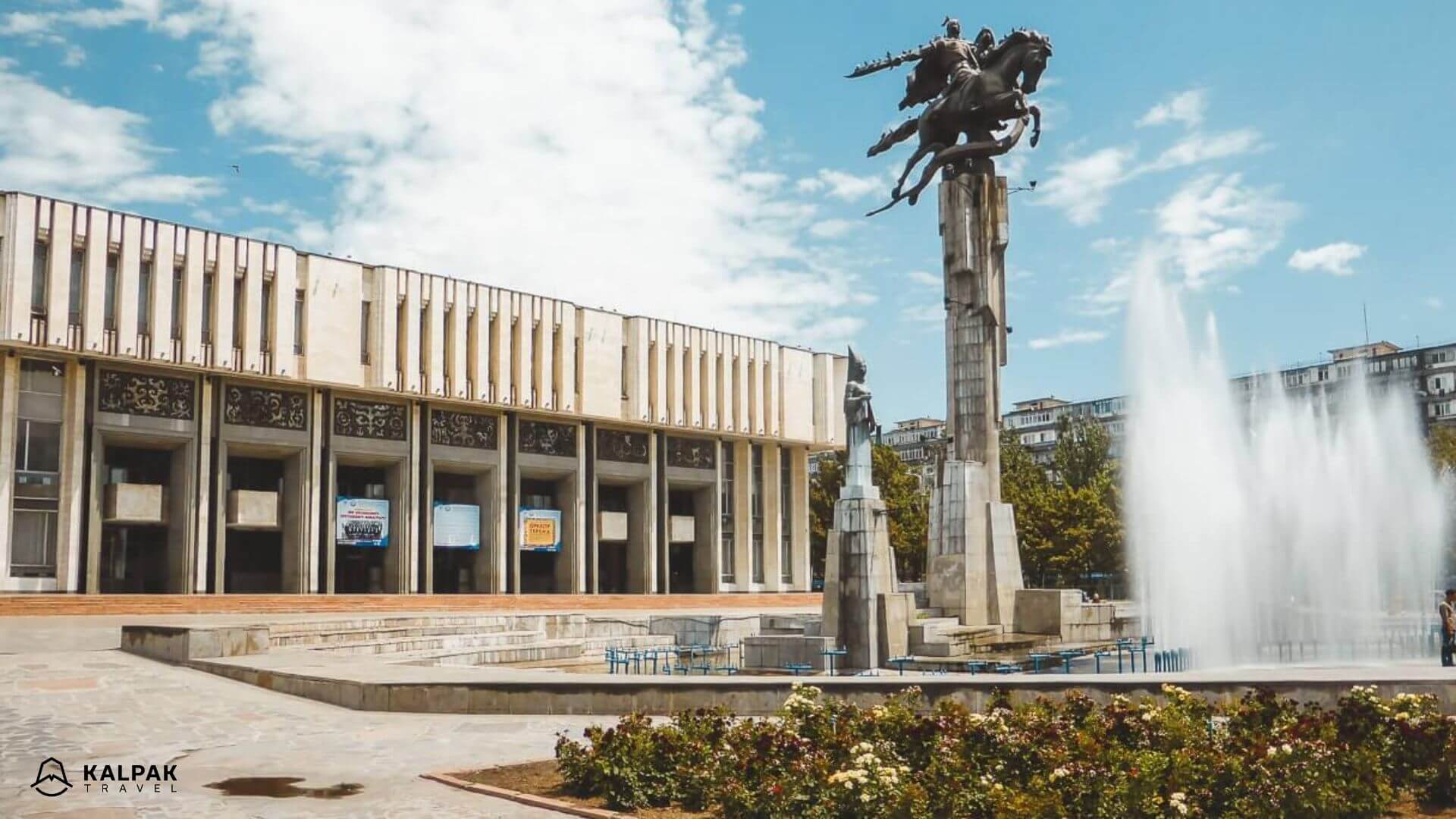 Just around half an hour away from Bishkek’s suburbs is a magnificent alpine national park. You can get closer to the mountains that form the backdrop to the city. The highest peak in the national park reaches 4895 meters and the Ala Archa range has more than fifty peaks.  It is a favorite local haunt for picnics as well as being popular with tourists looking to do short hikes. Built in the 11th century, Burana was once part of a flourishing Silk Road city called Balasaghun. Originally the tower was a minaret reaching over 40 meters in height and the earliest of such towers in the whole of Central Asia.  Sadly, an earthquake in the 15th century destroyed the top half of the tower.  Today it stands just over 20 meters high and you can even climb up it!  Near the tower, you can also take a look at the small museum and have a look at some ancient stone carvings known as balbals. 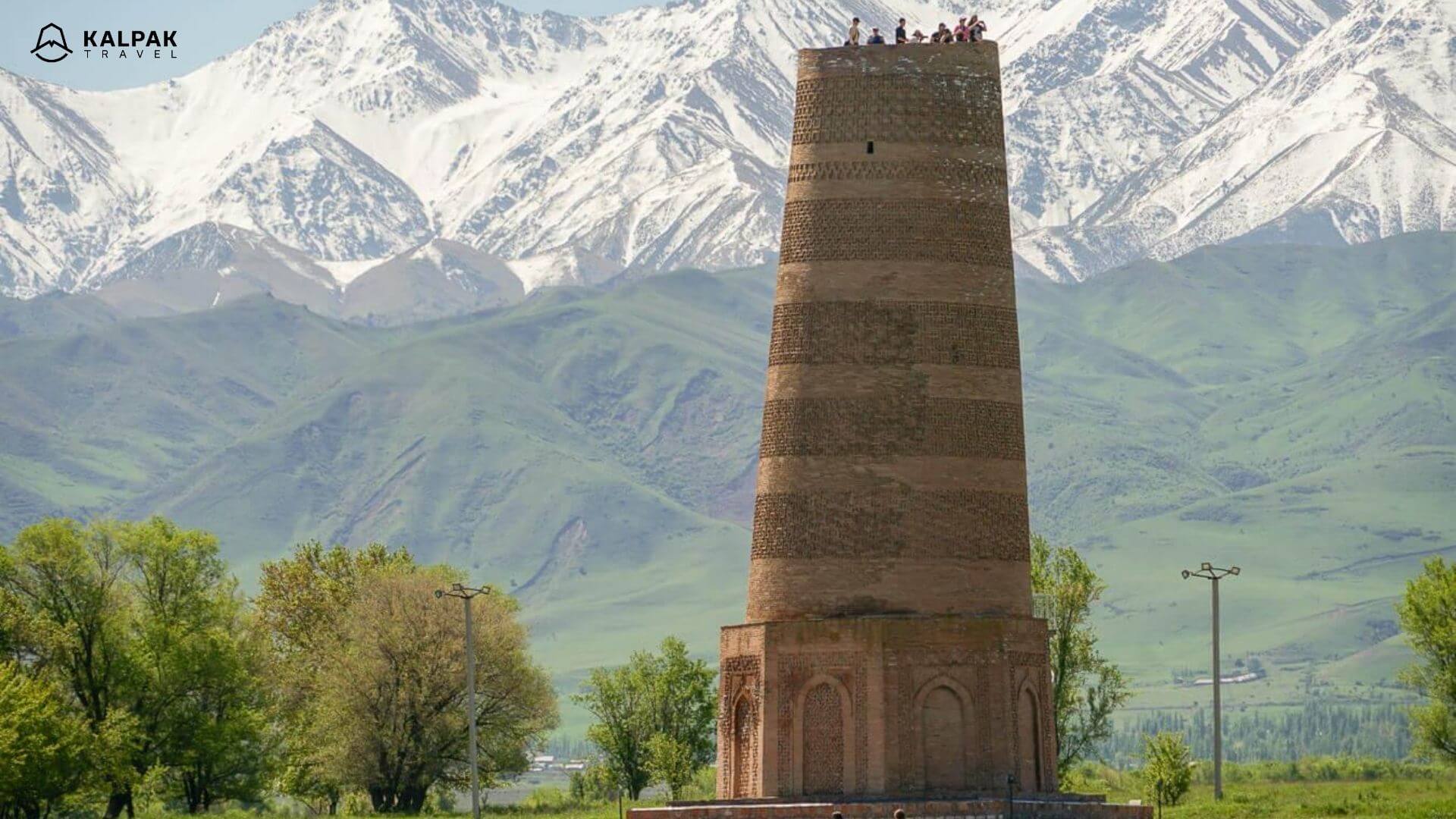 Song Kol Lake is a vast summer pasture, accessible only from June to September.  Nomads graze their animals there as they have been for millennia.  It is located at an altitude of 3016 meters, but don’t expect rugged peaks – it actually looks pretty flat.  Song Kul is a freshwater lake that stretches for 29 km in length and about 18 km in breadth.  Its maximum depth is only about 13 meters.  If you head up there, you’ll enjoy sleeping in real yurts and feeling free just like your nomad hosts. 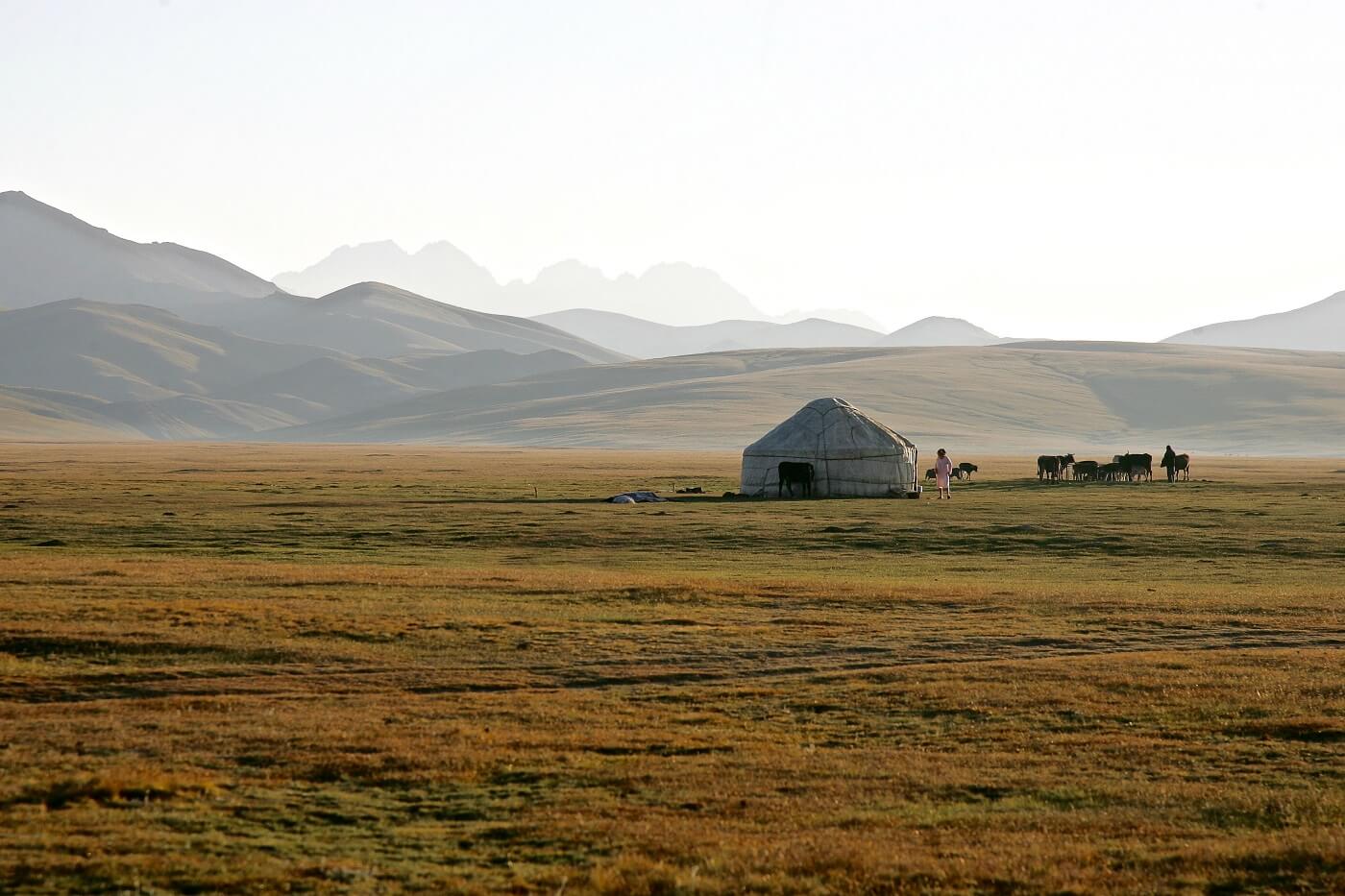 Tash Rabat is a historic stone caravanserai.  These were places used by merchants and their caravans on the ancient Silk Road.  It is one of the best preserved of such places in Central Asia.  You can sleep in yurts nearby or go horse riding.  It was originally built as a Nestorian monastery and then turned into a caravanserai. Osh is the oldest city in Kyrgyzstan, celebrating its 3000th anniversary in 2000.  It lies in the heart of the fertile Ferghana Valley.  The center of the city is occupied by Sulaiman-Too. This is a sacred mountain that has been continuously worshiped for millennia.  You will see women sliding down stones in the belief that this practice will increase their chance of giving birth to healthy children.  This is one of those perfect examples of longstanding traditions of the Silk Road, that combine prehistoric, pre-Islamic, Islamic and local beliefs into one holy site.  Sulaiman is the local pronunciation of Solomon.  It is thought that the throne of Solomon was once located on this mountain; some legends go so far as to say that he was buried there.  Another important site in Osh is the 16th-century mosque of Babur, the founder of the Mughal Empire. 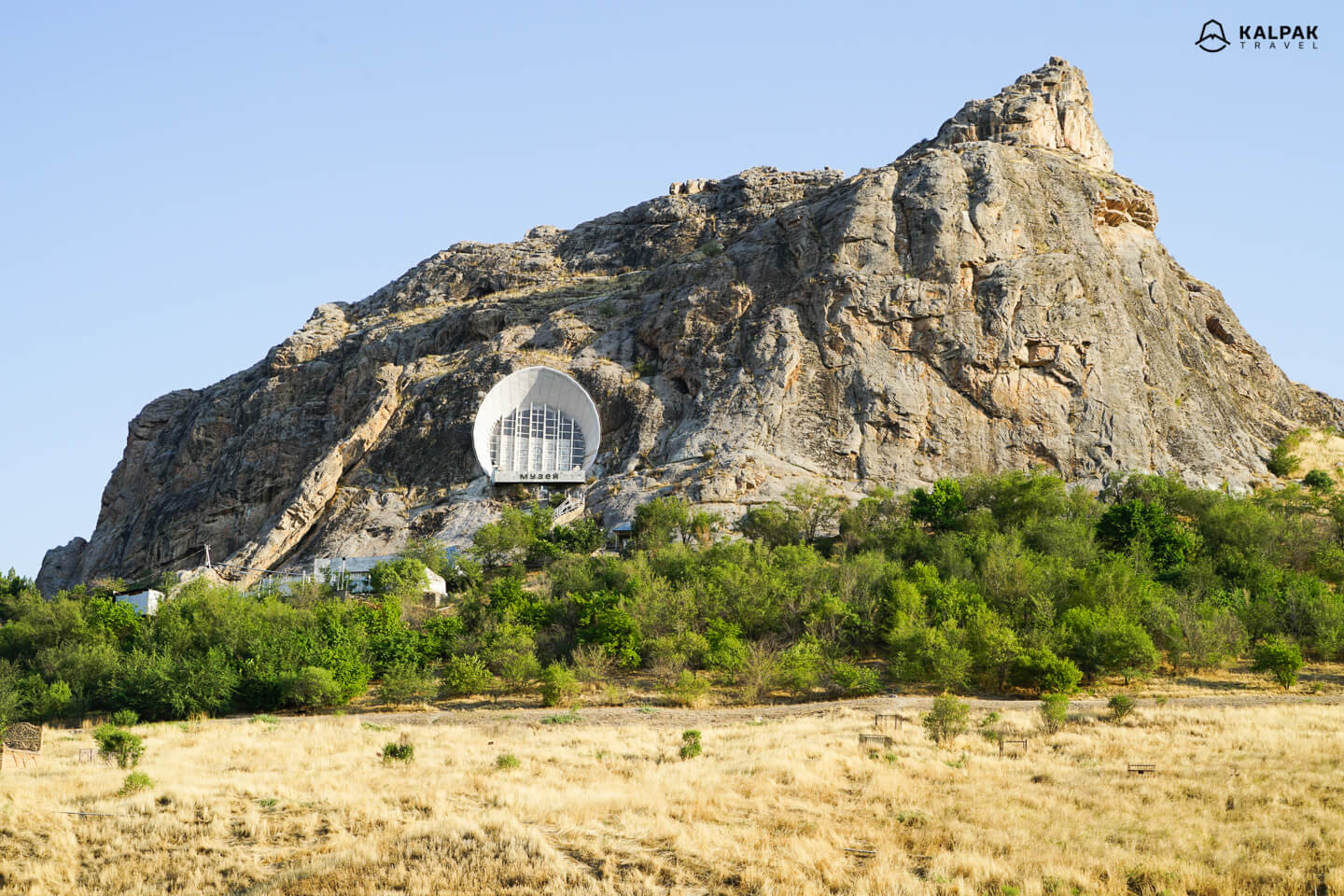 Peak Lenin base camp is around one to three hours away from Osh, situated on the border between Kyrgyzstan and Tajikistan.  At its highest point, it reaches 7134 meters.  It is considered to be one of the easiest ascents to over 7000 meters by climbers.  If you cannot get that high it is impressive even to enjoy the view of the peak from the first base camp which can be reached by car.  Even in the hottest summers, you can admire the snow-capped peaks of the mountains of the Trans-Alay Range where the Tian Shan & Pamir Mountain systems come together.

Karakol is the administrative center of the Issyk-Kul region.  However although it isn’t located right on the shores of the lake, it’s easy to make day trips to the lake or to the nearby mountains.  In the 19th century, it became a strategic point separating Russian Empire from China and an important Russian military settlement was established there in 1869.  It also attracted Chinese Muslims fleeing oppression in China.  These two important events of history can be seen in Dungan Mosque and Karakol’s Orthodox Church. 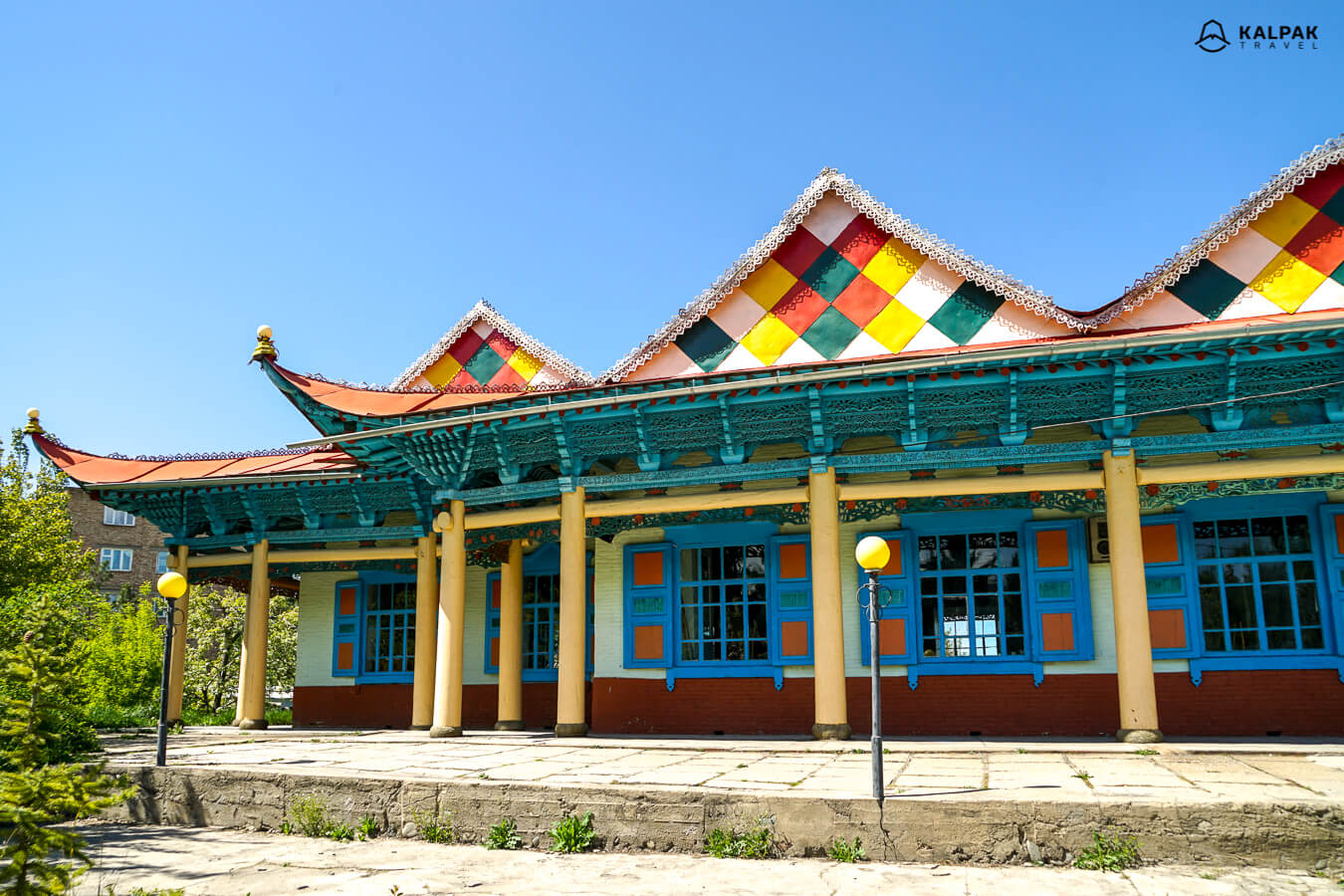 From Karakol, there are numerous opportunities to go for a hike or go horse riding.  Our favorite places to do so are the Djety Oguz valley with its red cliff formations and Altyn Arashan that reminds us of Swiss mountain valleys.  Djety Oguz means seven bulls.  The colorful cliffs are the setting for beautiful and tragic local legends that you can hear during our Kyrgyzstan tour or other Central Asia adventures. 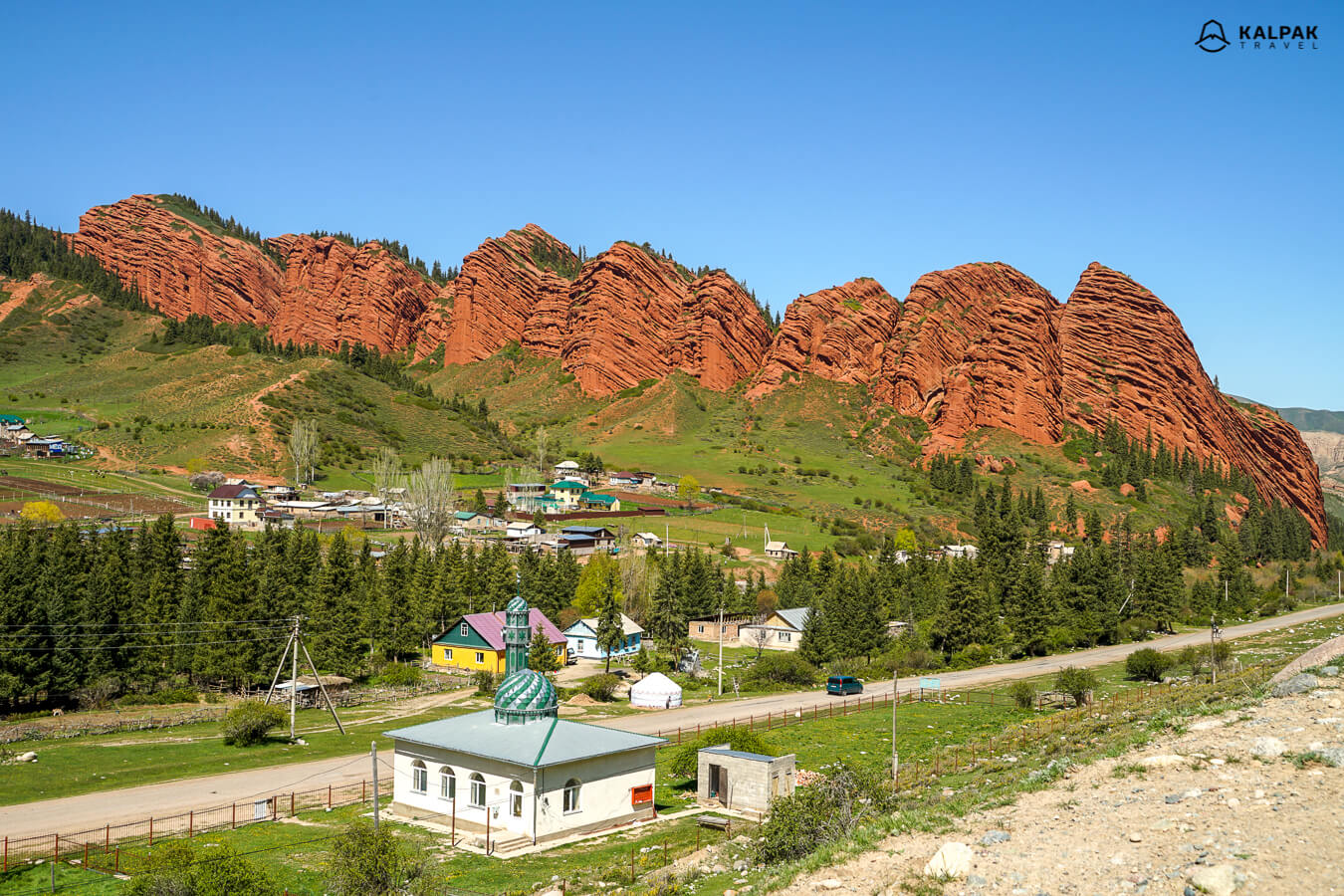 Altyn Arashan offers one of the most beautiful Kyrgyz trekking routes and best of all, it’s easy enough that anyone can do it. If you want some challenge – join our Kyrgyzstan Trekking Tour.

Visit Alay – Top Things to Do