Height: 24.6 meters, original height used to be over 40 meters

Location: modern Kyrgyzstan, 80km to the East of Bishkek, the tower used to be in the center of the Balasagun city in the 11th century) “I was transfixed…when I found out about an important medieval Turkish map in Istanbul that had at its heart a city called Balasaghun, which I had never even heard of, which did not appear on any maps, and whose very location was uncertain until recently, and yet was once considered the centre of the world” writes Peter Frankopan in the preface to his book The Silk Roads: a New History of the World. So, if you’re wondering what this map is and where you might find Balasaghun, the answer is modern Kyrgyzstan! If you are planning a trip to Kyrgyzstan, you will definitely come across the Burana Tower. You’ll encounter it on the way to or from Bishkek, a lonely tower amidst the fertile fields of the Chuy Valley.  It is just about an hour away from the capital and 15 min from Tokmok town. Once it stood at the center of the flourishing Silk Road city of Balasagun. The earliest archaeological findings date to 5th century. Three centuries later, the settlement around it had grown into a larger city. Arabic travelers in the 17th century wrote that Balasagun had once “a wide fortress around the city, 40 cathedrals, and 200 ordinary mosques; 20 institutions for the poor and ten madrassas or religious schools.” Today, we can just imagine how big the city must have been to have had so many public institutions. The city had its own irrigation and sewage system and its own mint. 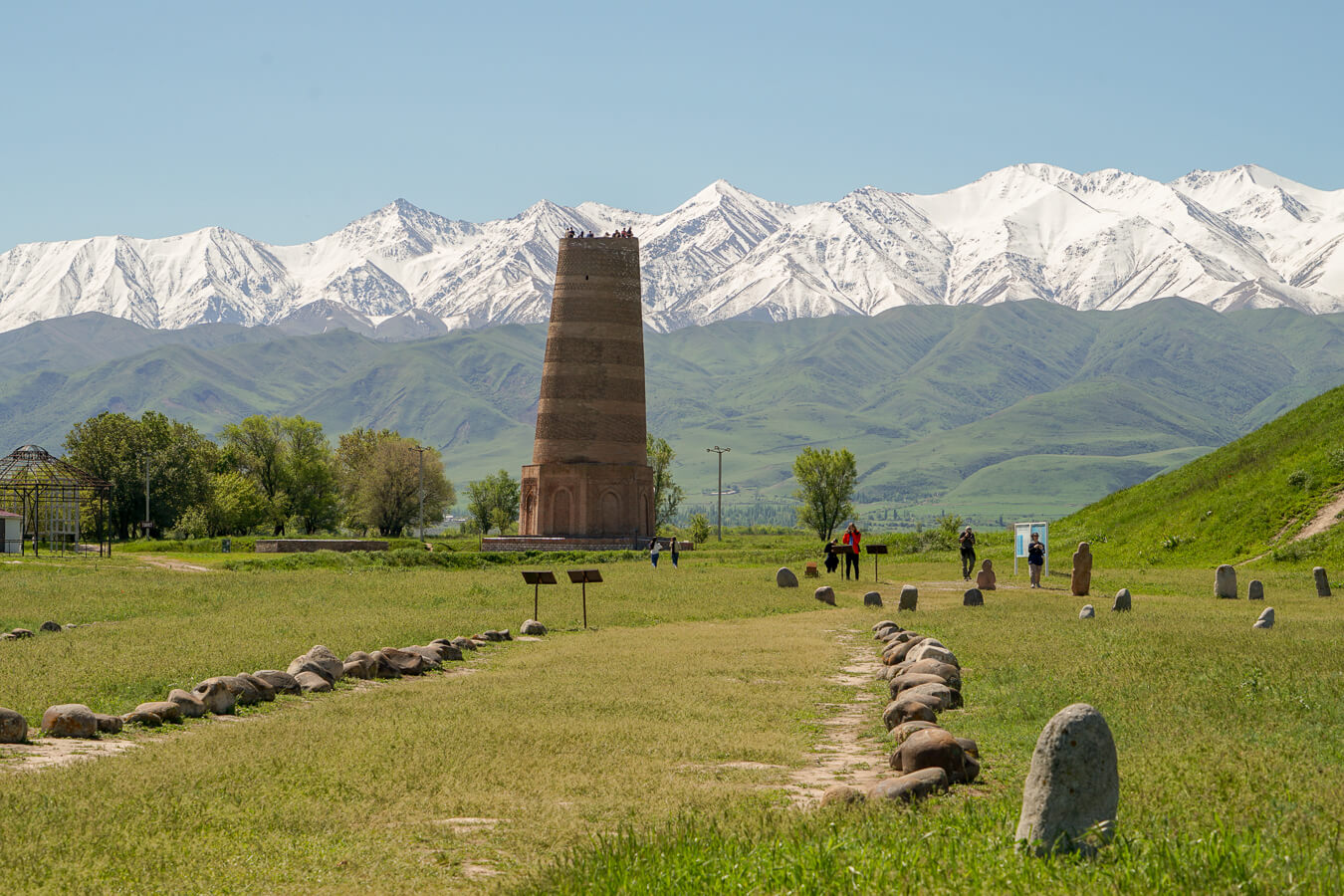 Balasaghun was once the capital of the great Karakhanid Empire that stretched from West China to the Aral Sea. The empire ruled from the 10th to the 12th century. But its name was actually coined by 19th-century historians. In a literal sense, kara translates as black, but metaphorically symbolizes great, courageous and pure; khan means ruler. It was a time which fostered Turkic literature and saw the adoption of Islam as a state religion. Expansion saw cities like Kashgar, Uzgen, Osh, Samarkand and Bukhara come under the Karakhanid reach. Now the small archeological complex subtly reminds us of its past glory. One of the prominent scholars of the Empire was Jusuf Balasaghuni; from his name, we can tell he came from the city of Balasaghun. He wrote a book called Kutadgu Bilig – Blessed Knowledge or Knowledge that brings Happiness. Rather than focusing on what life was like in the city, it’s a piece packed with advice for the ruler and his contemporaries. Even ten centuries later his wise words still find a place in the local philosophy. His work was one of the first major poetic works written in the Turkic language; before, the language of poetry and literature was Arabic or Persian. Today you can see his image on 1000 som note and the national university is also named after him.

Mahmud Kashgari and his World Map

Another prominent scholar and poet at that time was Mahmud Kashgari. He’s credited as the cartographer who created the round map of the world, placing at its center Barskoon near Issyk Kul and Balasaghun. You’ll find the map, in the national library in Istanbul. He wrote the first comprehensive dictionary of Turkic dialects in Central Asia, a book called Dīwān Lughāt al-Turk, which was of enormous significance to the promotion of trade from China to the Mediterranean. The Legend of Burana Minaret

Burana refers to a minaret located next to the mosque used in the call for prayers. What’s interesting, however, is that the surviving legend about the tower is not based on its religious role but instead reminds western travelers of the sleeping beauty fairytale. The legend is about a princess, the daughter of a local Khan(king). When his long-awaited daughter was born, he laid on a lavish celebration. Everyone was invited. He gathered all the clairvoyants and wise men in the land. Most of them foretold she’d have a long and happy life. But one predicted the girl would die as she turned sixteen. Panic-stricken, the Khan constructed the tower and in it, his daughter lived safely. On her 16th birthday, the Khan relaxed, happy in the knowledge that the prediction had not come true. He rushed to the tower, bearing a gift of fresh fruits to celebrate with his daughter. But in his hurry, he failed to notice the poisonous spider which had concealed itself in the basket. As his daughter reached for the fruit, she was fatally bitten. Today, the Burana Tower stands as the earliest architectural wonder of Central Asia. It was built in the 11th century and was used as a template for later minarets, such as the one found in Bukhara. Such minarets are not painted, but instead, gain their decoration from the geometric patterns found in the brickwork. The Burana Tower has several such stripes and also eight faux doorways. Once, it stood over forty meters tall but was partially fallen by the earthquake which impacted the region in the 14th century. These days, travelers can climb the 24.6 meters to the top of the restored tower; take a torch as it’s dark inside! Those who make it to the top are rewarded with views of the whole architectural complex. Excavations have revealed four mausoleum complexes with dynastic crypts. Only the brick basements can be seen though, as well as a few remnants of antique buildings. It’s worth climbing the nearby hill to get a bird’s eye view. Nearby, you’ll find stone carvings known as balbal. Initially, they were erected by Turkic tribes as a representation of slain enemies. Later, they became memorials to their own ancestors, characterized by detailed carvings of faces and hands; they also give us an insight into the clothes, jewelry, and weaponry of the time. Look out for the ones which appear to be carrying a wine glass or cup of tea. They’re thought to be a representation of the Nestorians, a group of early Christians who also lived in the city. One grave excavation gives an insight into the burial ritual of an 8th-century warrior interred in military dress with a horse alongside. The richly decorated belt with gold and silver ornamentation had a dagger, sword and a leather bag attached. Such belts belonged to high ranking warriors since a belt was a status symbol. What is very interesting is that it was a grave of a woman warrior. In the small museum nearby, you can also see the stone statue remnants of Buddha and lotus, as well as early depictions of the cross symbol, Arabic scripts and the burial ossuaries of the Zoroastrians. It says a lot about how the followers of these different religions coexisted peacefully. There are petroglyphs, pottery, and jewelry along with many other small artifacts displayed in the museum. Archaeological excavations are still in their infancy and there’s much still to be discovered about this part of the Karakhanid Empire. It is incredible to imagine that the large city that welcomed those Silk Road caravans left only a minaret after its Golden Age. Our Best of Kyrgyzstan tour make a brief stop at the Burana Tower if you would like to visit this place.  Standing in the middle of nowhere, it seems almost surreal against a vast landscape of meadows and mountains. But what a place to let your imagination wander!

Horses and Horse Riding in Kyrgyzstan