Bishkek – the capital of the Kyrgyz Republic

Bishkek has been the capital of the Kyrgyz Republic since 1991, but the place has had many names over the course of its history. Before 1991, the city was called Frunze, named after a Soviet military leader born here. Before 1926, the place was known as Pishpek and had a Kokand fortress, which was conquered by Tsarist Russia in 1862. Archaeologists have found artifacts from ancient times within modern Bishkek and refer to a city called Suli. Nowadays, the large street called Jibek Jolu, literally meaning the Silk Road, reminds us that this city was also once part of the Great Silk Road.  However, other than that the city is relatively new and the city center sightseeing places mostly consist of buildings built during the Soviet period. 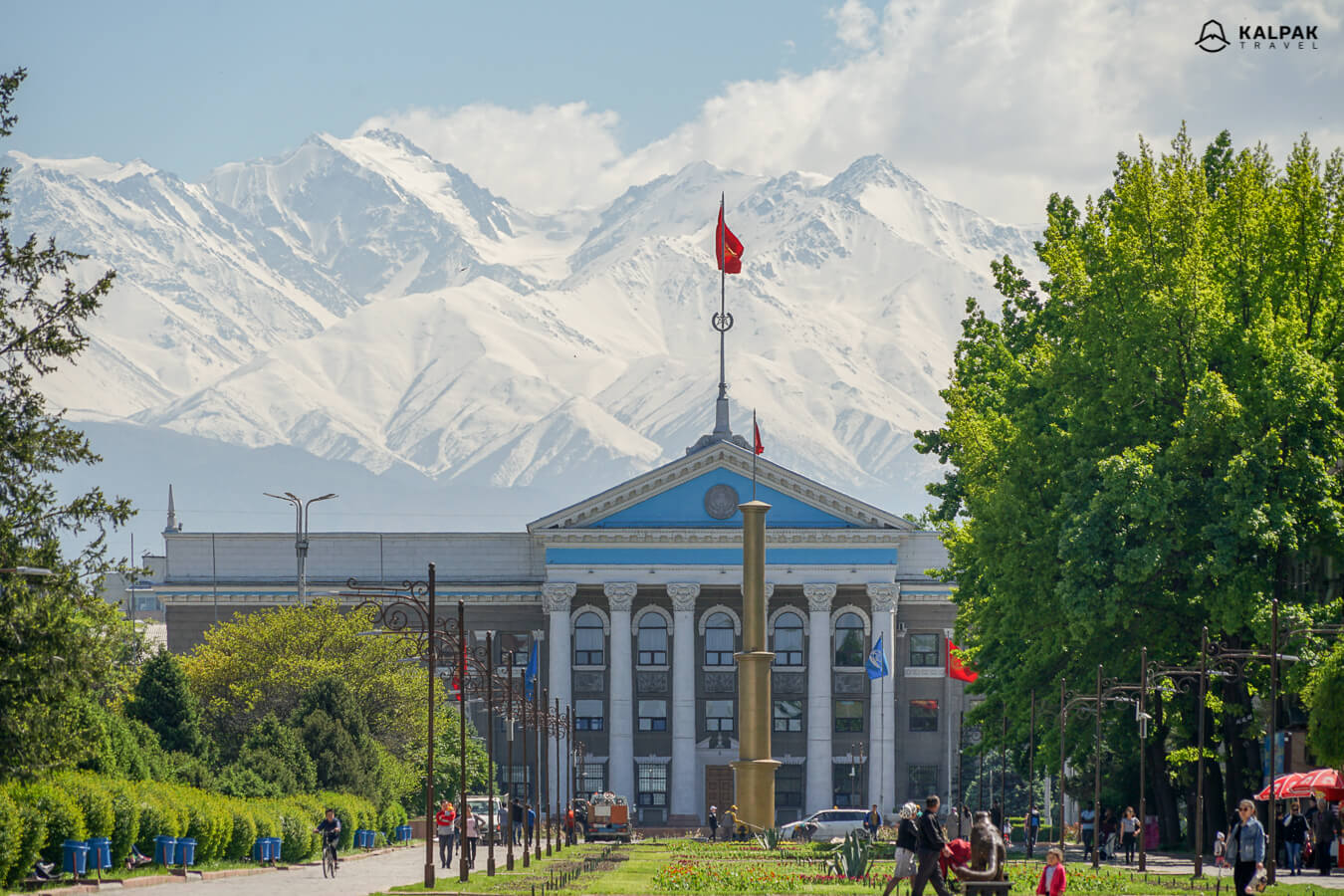 According to a legend, Bishkek was Baatyr (or hero), who was born and raised in this region. He was brave and fair; he protected his people, making the region secure and suitable for traders and travelers. The name Bishkek is derived from a utensil important to nomads used in making a fermented horse milk drink called Kymyz. Most of the tours start in the city center, next to the flag, where you’ll also find another national hero, Manas, and the national museum. 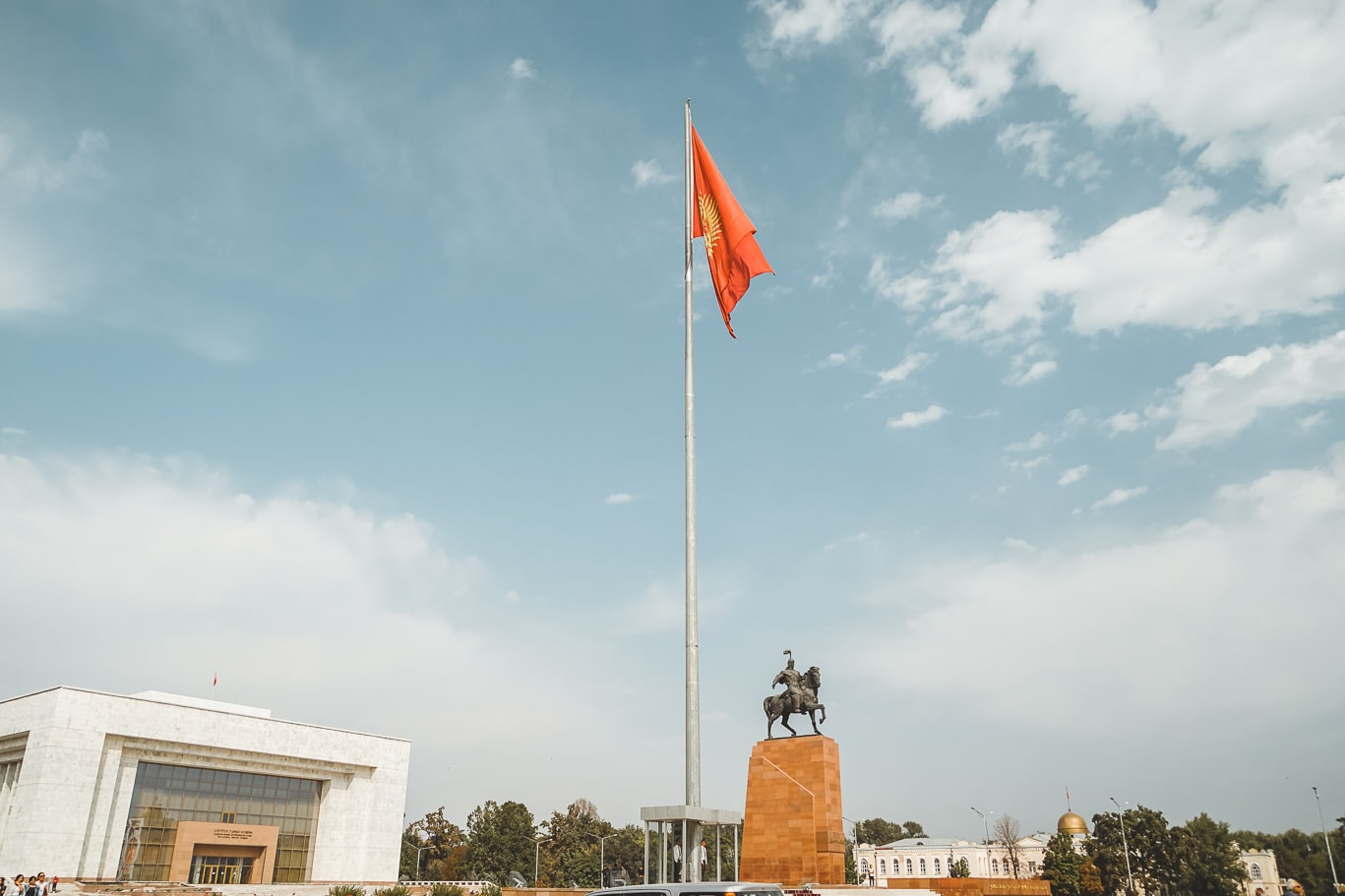 Two soldiers stand next to the flag and it is fascinating to watch the changing of the guard. 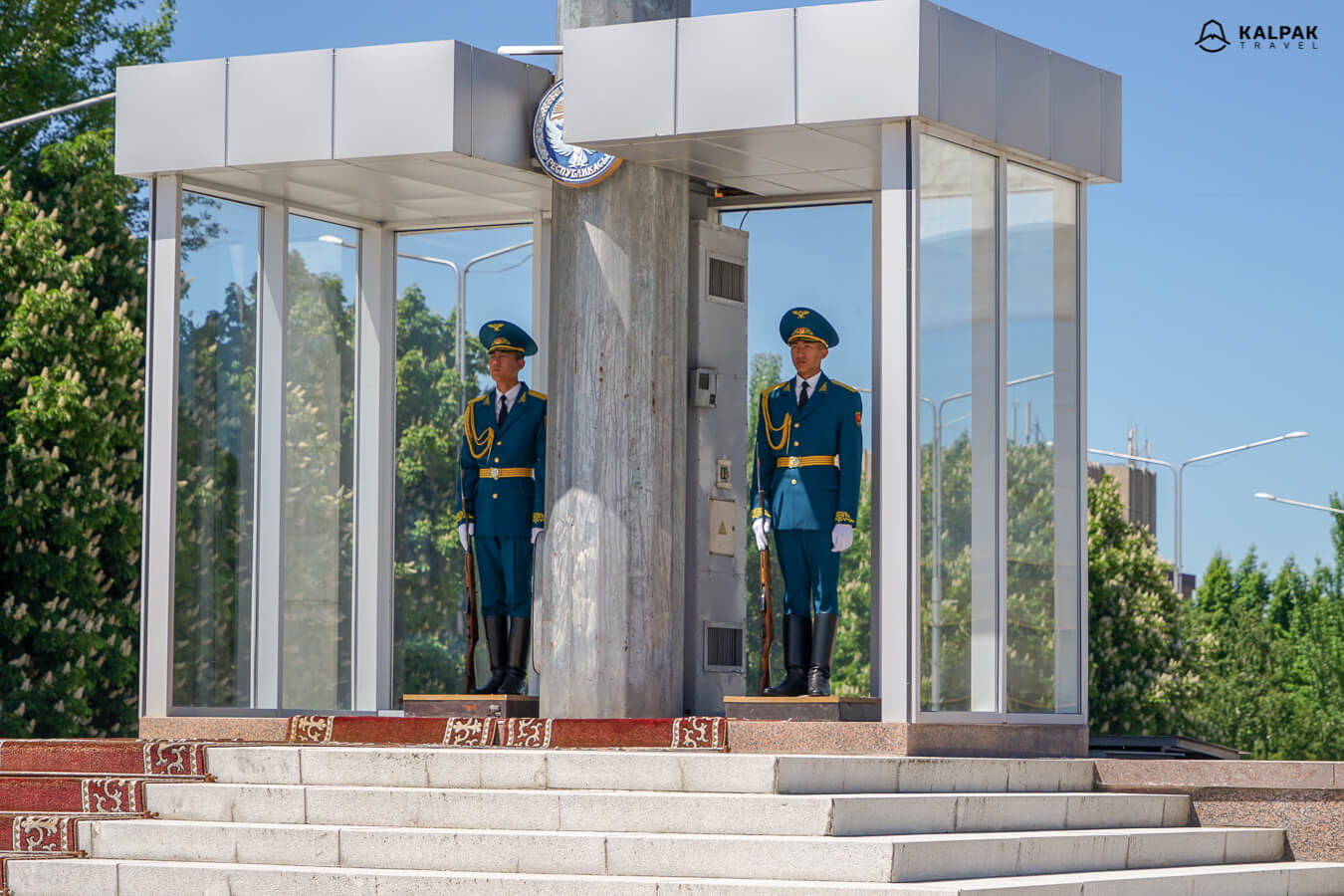 The city center with its museum, the White House, and the iconic arched buildings were built in the 1980s. The main square is called Ala-Too and here, big celebrations take place on national holidays. 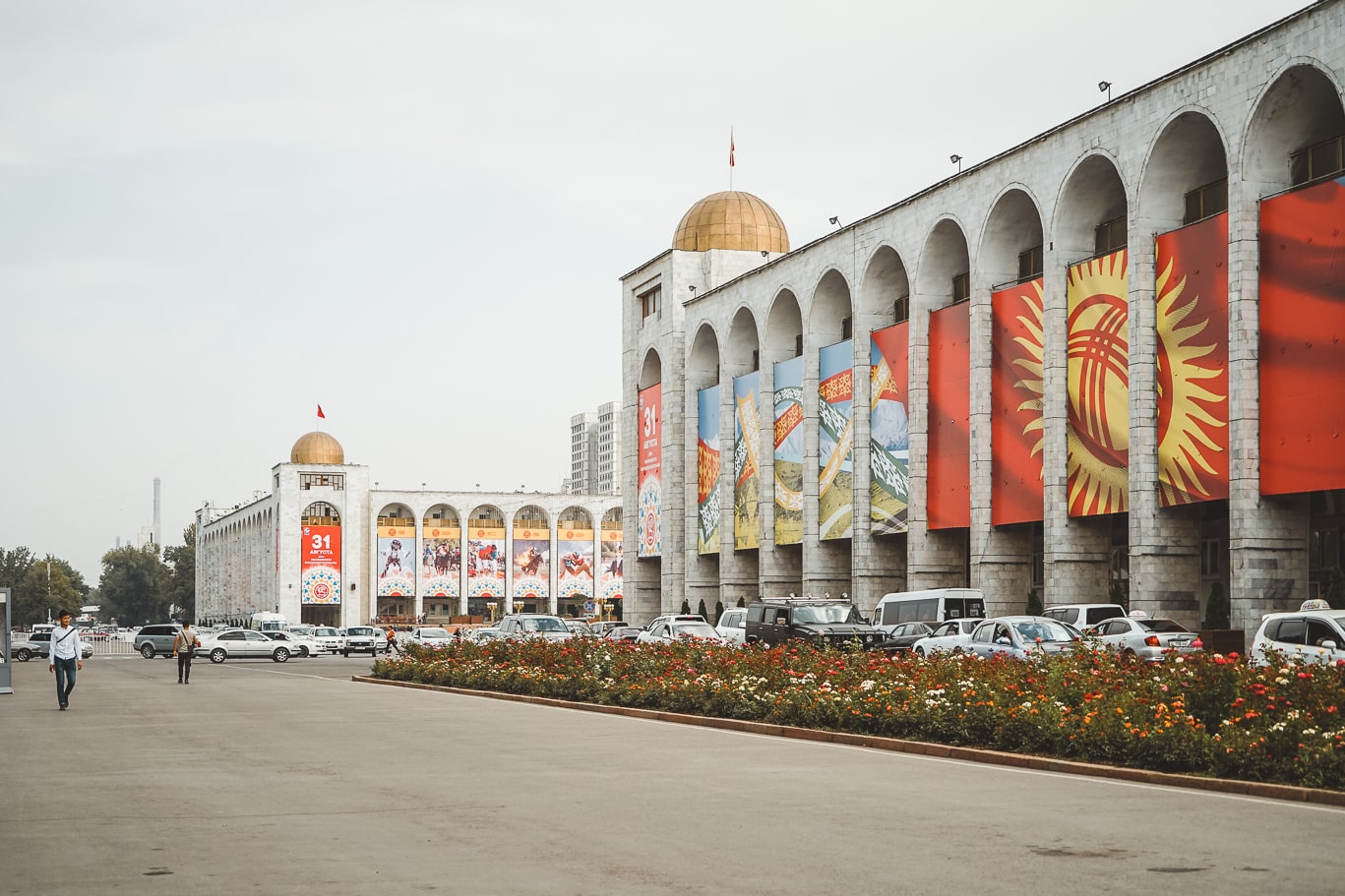 Right next to the museum there is one of the oldest buildings in the city.  It was built in 1926 by famous architect V.P. Zenkov, who also worked in Almaty.  Originally, it was the seat of the Soviet National Committee and Central Electoral Committee. Today it hosts the Assembly of Nations in Kyrgyzstan. 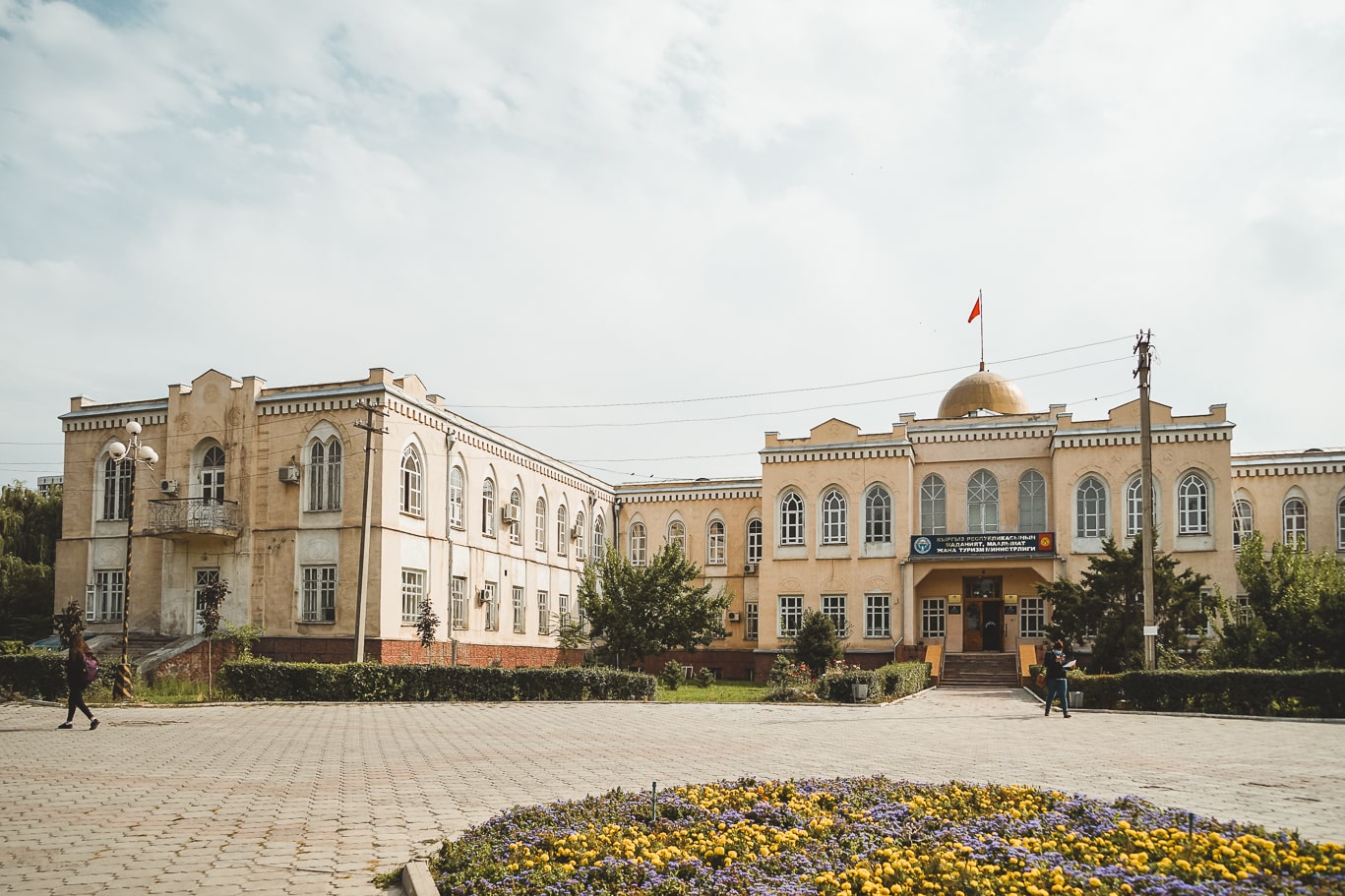 The national museum was initially named after Lenin and his statue used to stand in front of it, nowadays it is moved to the backside of the building. The museum is massive and richly decorated with traditional ornamentation. It was completed in 1984, after major renovations it opened again at the end of 2021. 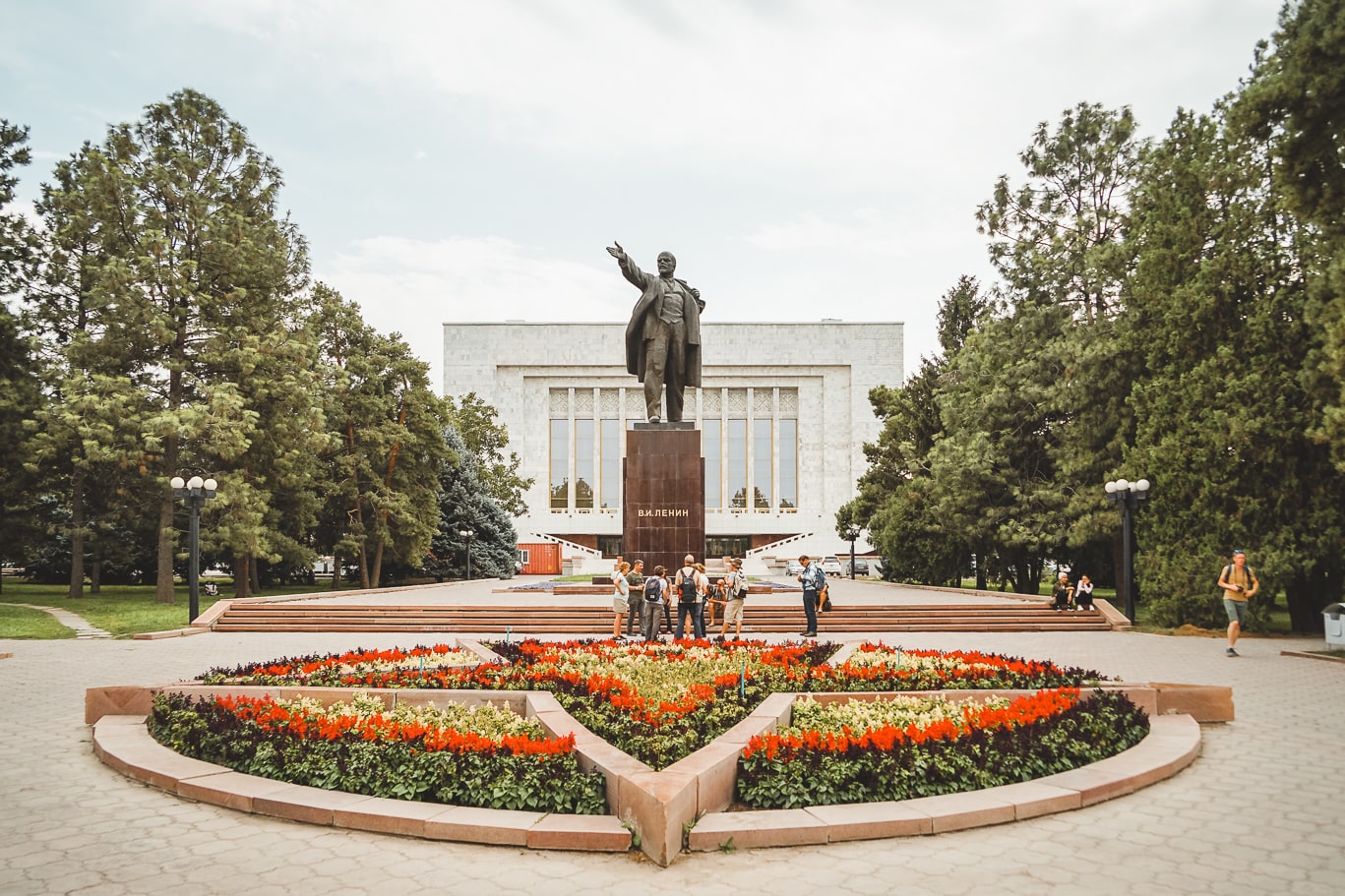 Behind the museum, there is an old square where you’ll find the parliamentary building. The parliament with 16 pillars adorning its entrance was completed in 1956, under the watchful eye of architect U.B.Dubov. 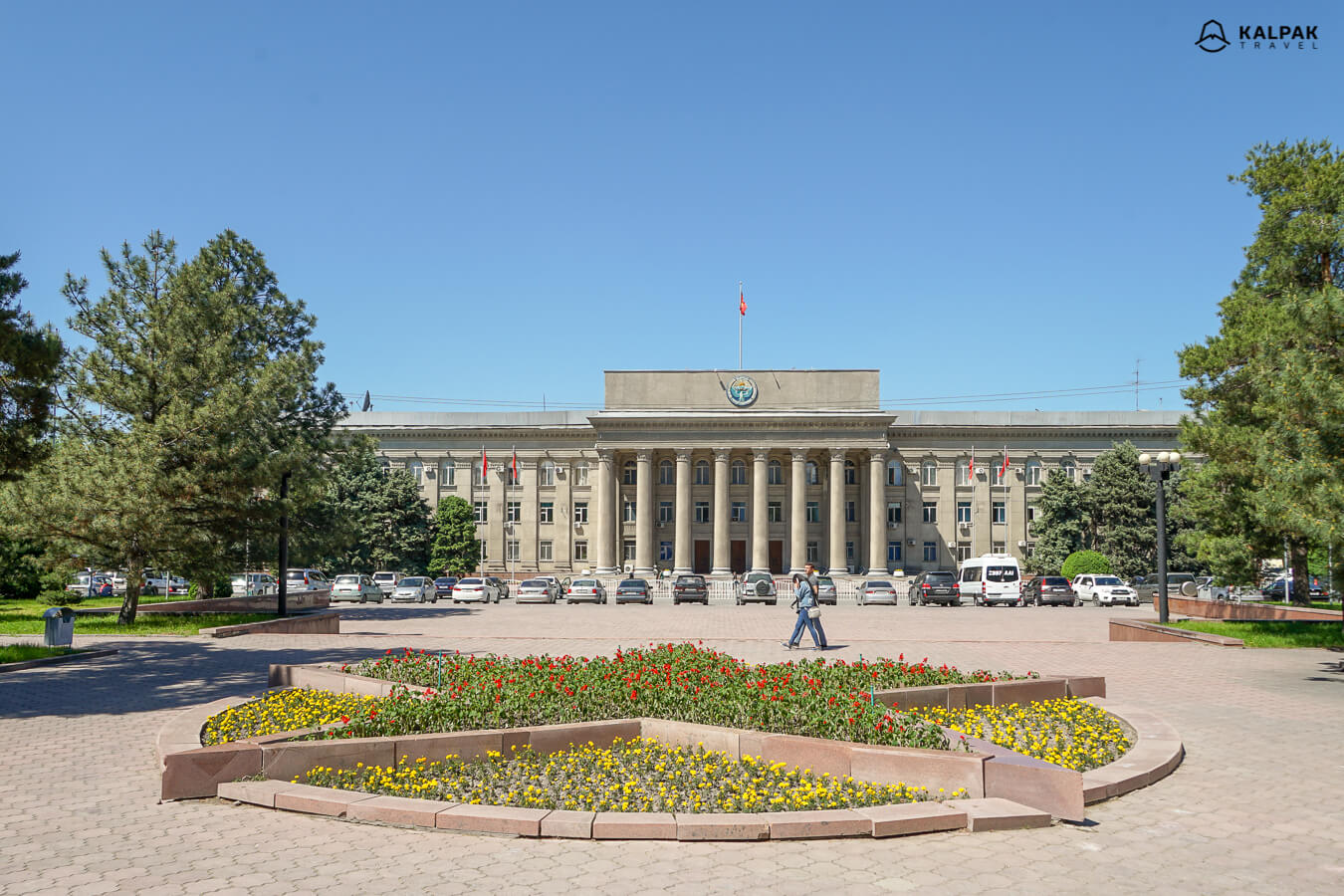 Walking further along this street, you have two choices: either to go to the Panfilov Park, which is a favorite place for kids with numerous attractions and games, or go to Dubovyi Park which literally means Oak Park. This small park has many sculptures and works of art to peruse. Several parks and alleys lined with trees make the city pleasant to explore on foot even in summer when temperatures can reach 40°C. Even before the Russians came, the area had a sophisticated watering system.  At the end of the 19th century, trees were planted along irrigation canals.  During the Soviet era, a grid pattern of streets was planned but when implemented, the city retained its green credentials. There is a gallery in this park and its building was initially a church built during the reign of the Russian Empire in 1876.

After the park on the big central street, you’ll come across the national theater of Opera & Ballet that was opened on May 15, 1955.

Victory Square with half a yurt structure and a sculpture of a woman is an important stop point for newlyweds.  It is customary to place flowers by the eternal flame and pay tribute to those who fought in World War II. The monument was opened on May 9, 1985. 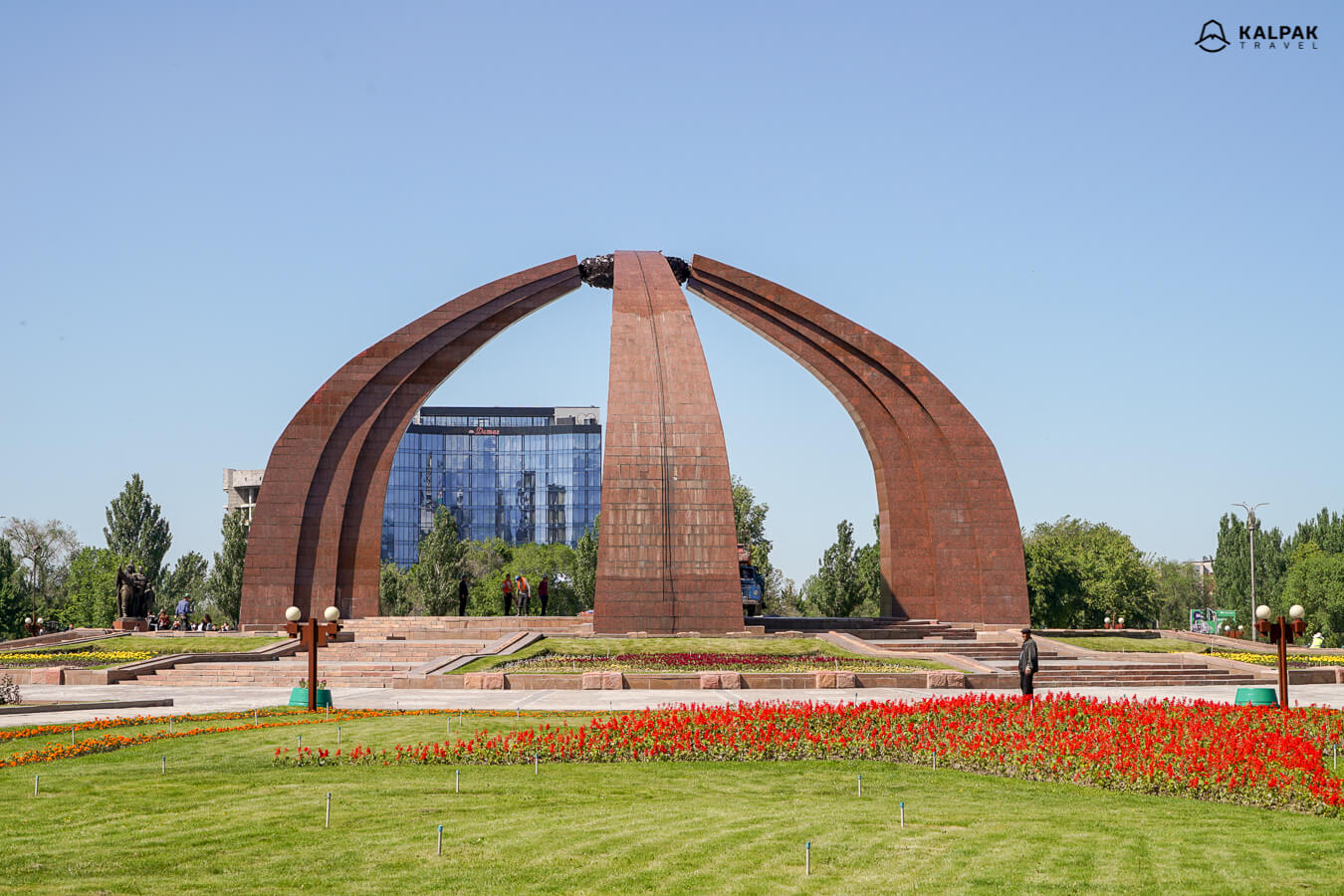 If you have more time to explore the city

While in Bishkek do not miss an opportunity to shop in Osh Bazaar where you can buy anything from a Kalpak hat to a bag of fresh fruits. The major building at this bazaar is called Kyjal and was built in 1983. 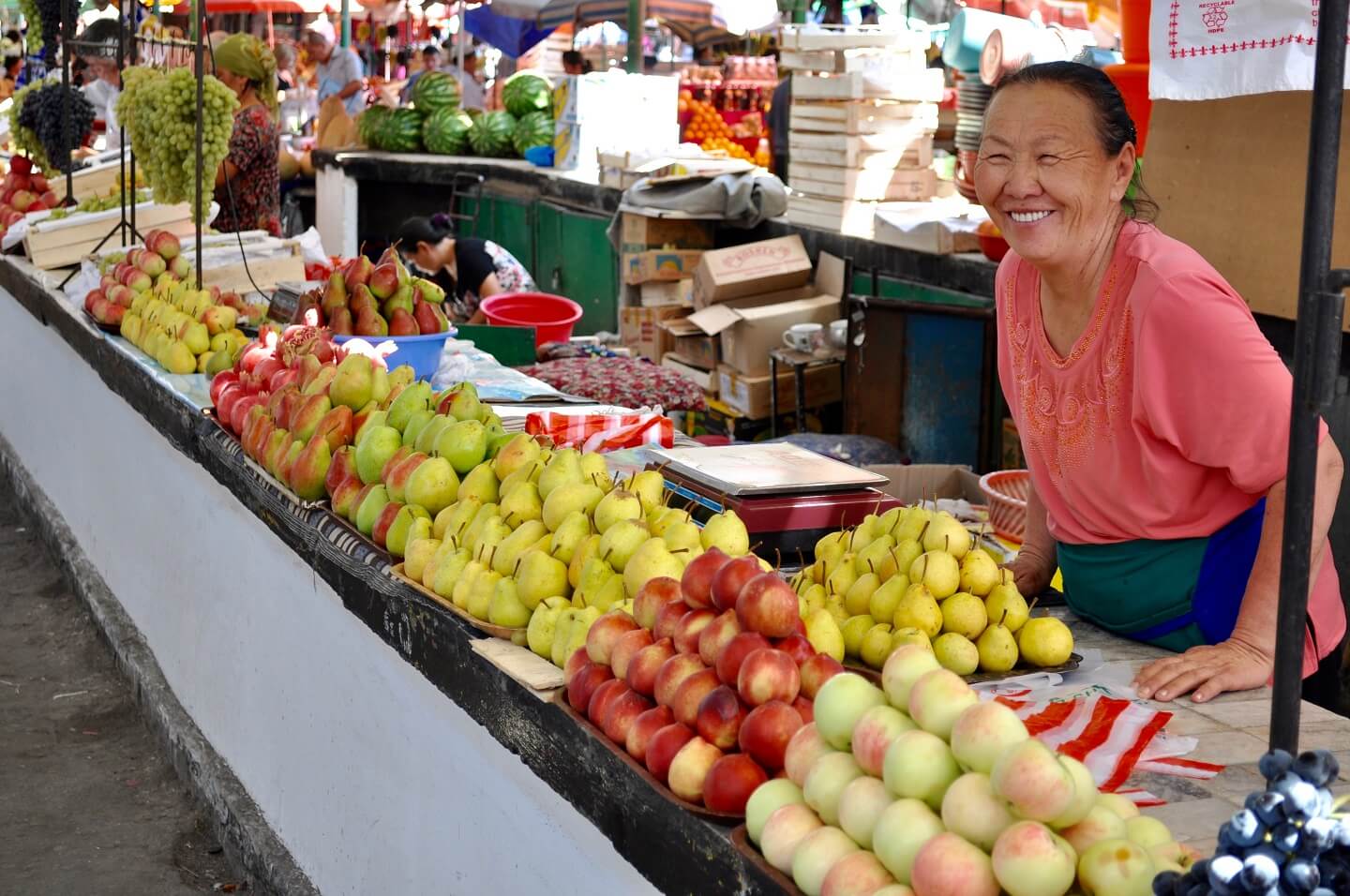 This square, near the philharmonic hall and universities, is well worth a look. Philharmonic Hall can fit up to 1500 people and was built in 1980 by A. Pechenochkin. 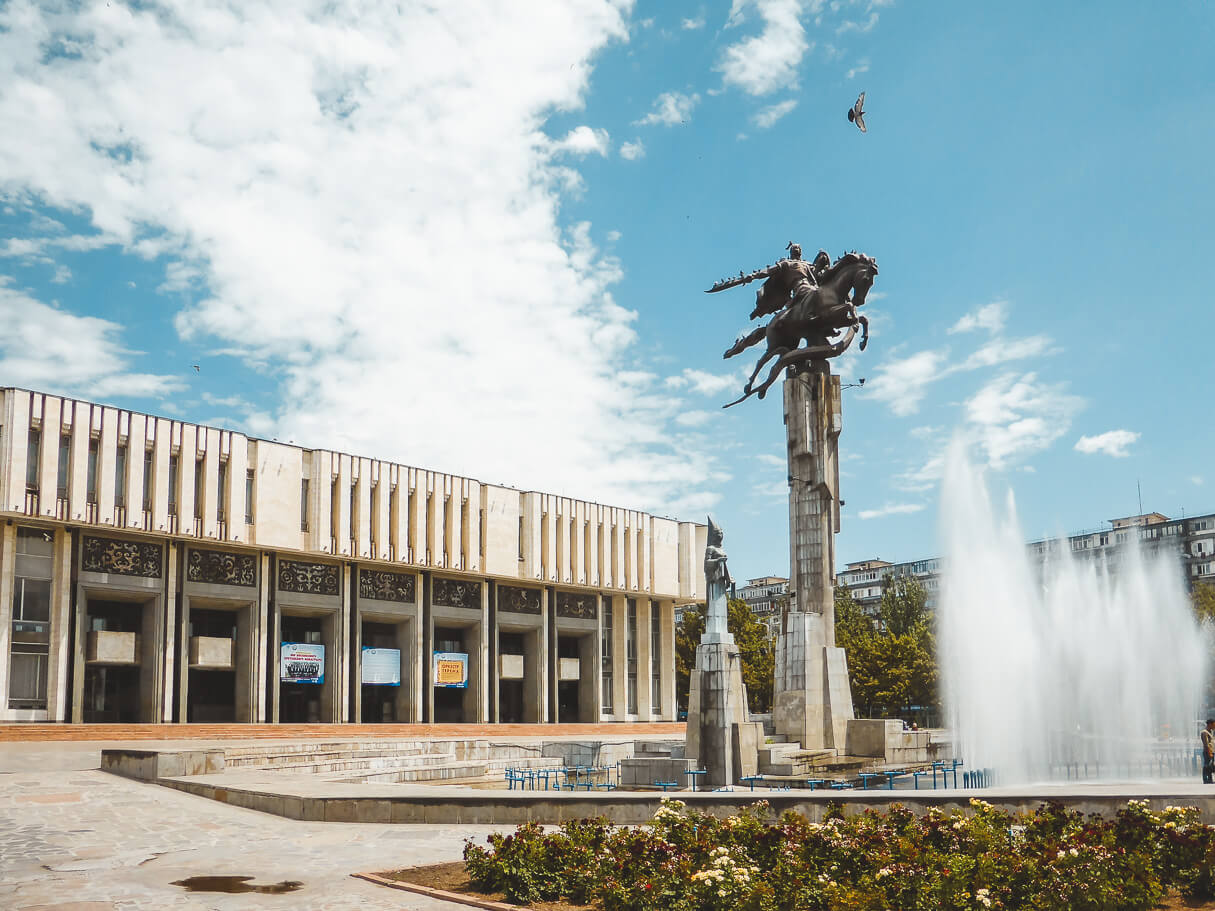 Office of the City Mayor

Mayor’s Office was built in 1957 by architect P.P. Ivanov. 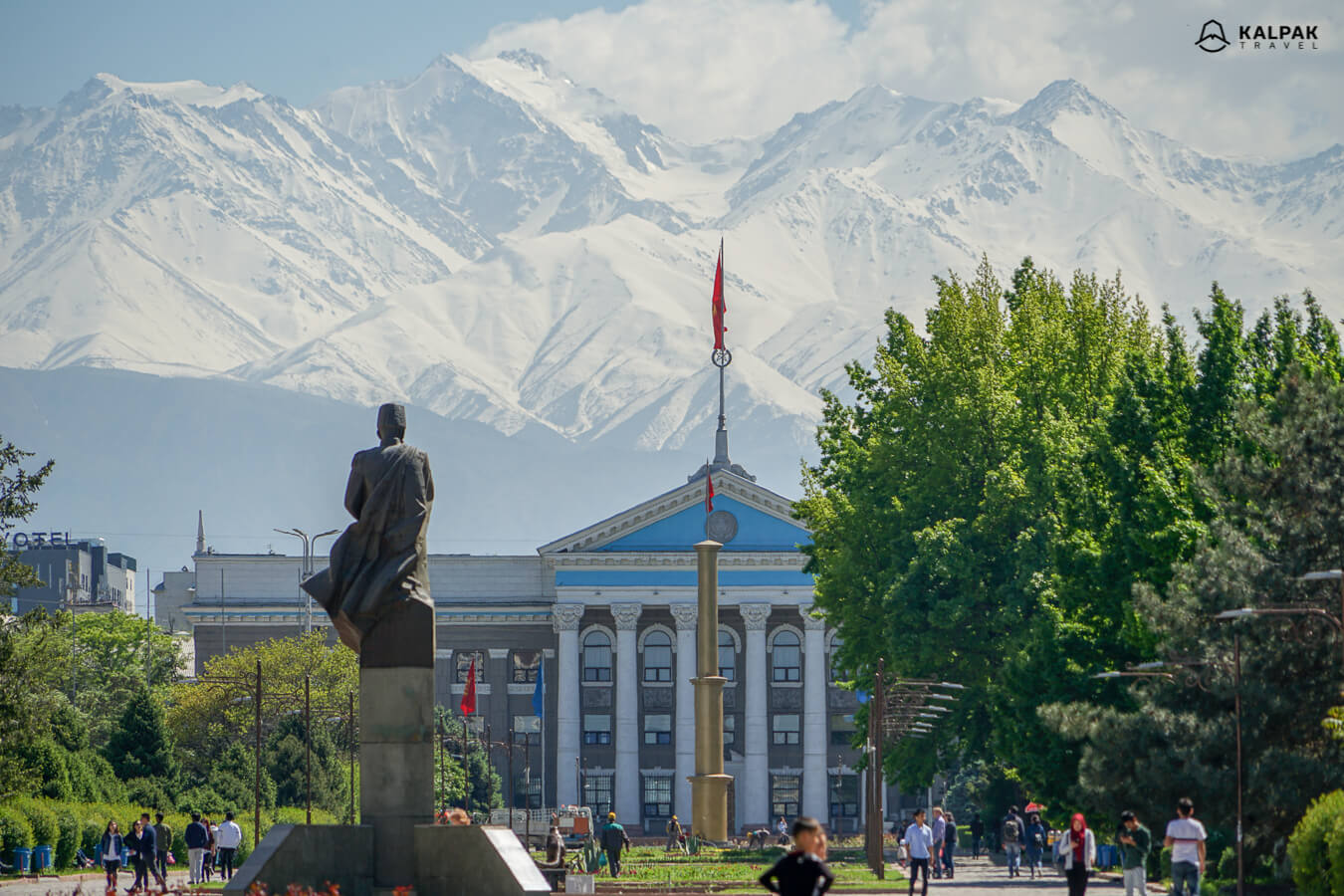 Walking further you can see a permanent circus building that was finished in 1976. 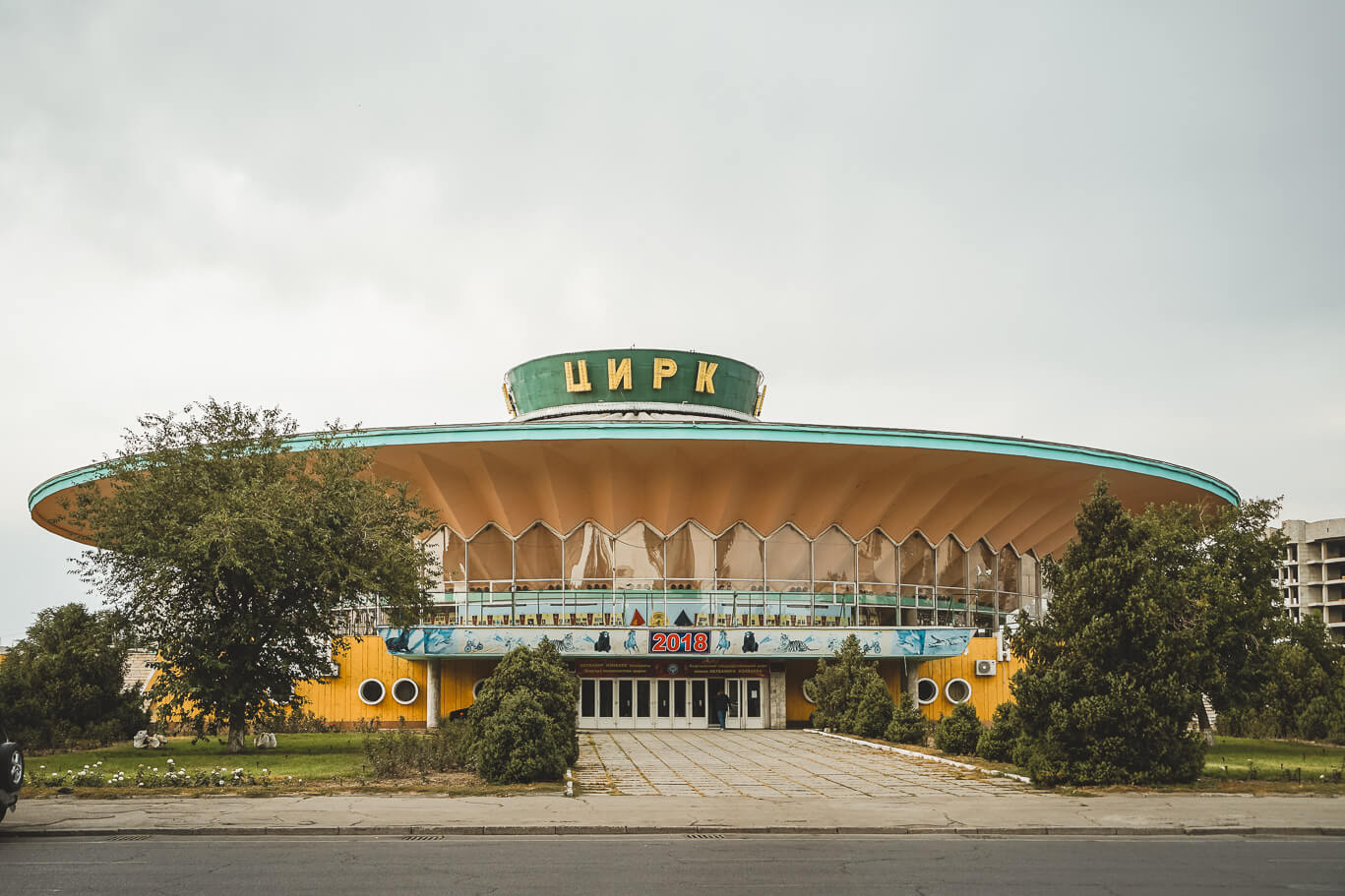 In 1916 the green town had a population of around 22 thousand people; nowadays it is around one million including agglomeration. Shopping in Bishkek is one of the most attractive leisure pursuits in Central Asia.  Most souvenirs are handmade and cheap even in comparison to other Central Asian countries. For souvenir shopping, you can go to Osh bazaar, or TZUM and if you would like high-quality souvenirs you can visit Tumar shop. If you forgot to bring something that you need for your tour in Kyrgyzstan you can shop at international stores in modern malls like Bishkek Park, Gum or Asia Mall. In contrast, the Shipment Container market offers cheap prices for Chinese goods directly transported to Dordoi Bazaar.  From there, items are sold on to other Central Asian or former Soviet bloc countries. Eat like a local at one of the many cafes and restaurants in Bishkek. You can find Italian restaurants, fast food chains, coffee places and restaurants specializing in Asian and Central Asian cuisine. In summer, many places open up outdoor terraces enabling you to take full advantage of the weather. 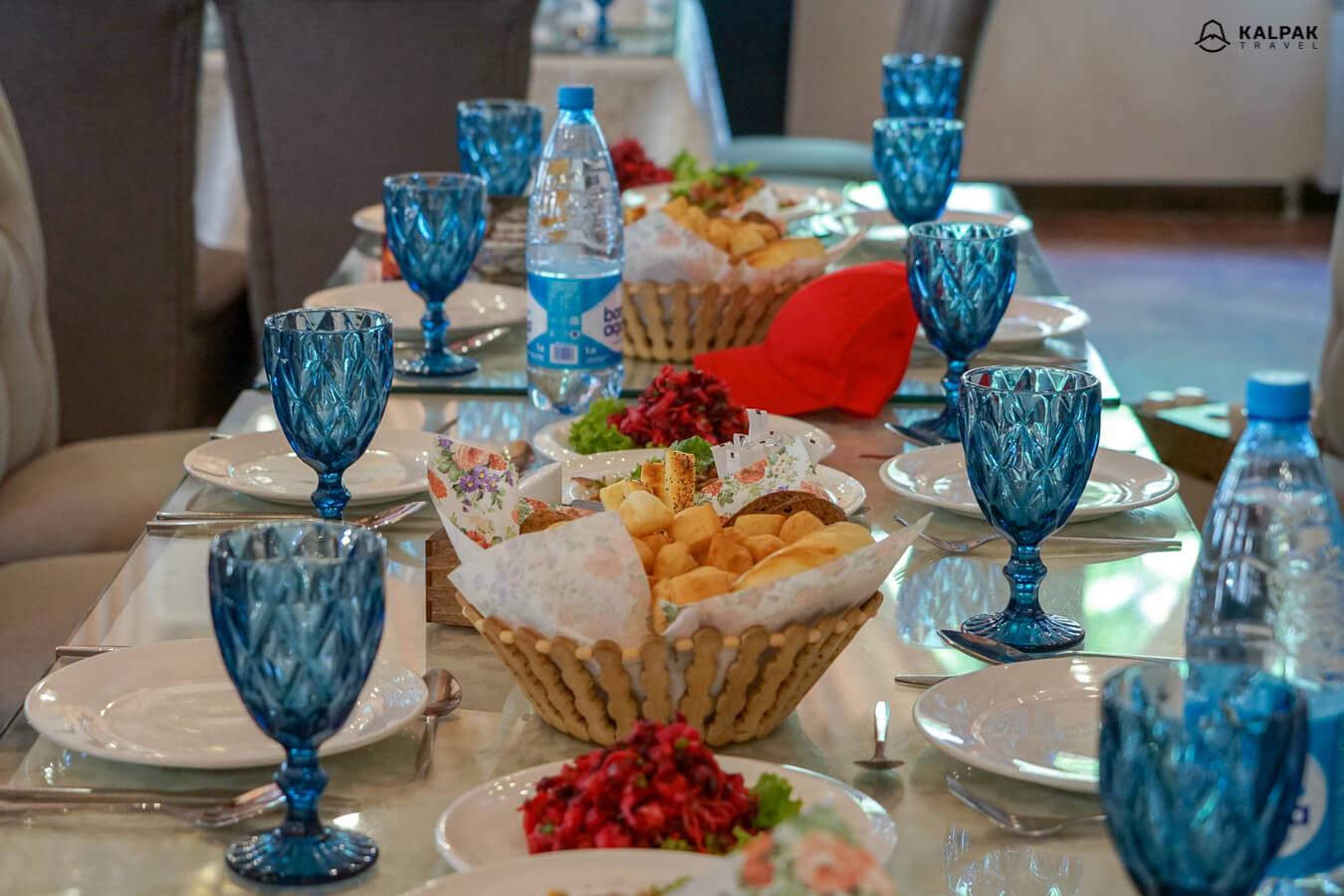 If you like nature and would like to explore the mountains nearby, you can go to Ala Archa National Park for a day hike to the waterfall. Another option is to visit ethno-complex Supara Chunkurchak with an overnight option, where you can taste local cuisine, sleep in modern yurts with glass windows and go for short walks nearby. If you are interested in Soviet history, you can visit the memorial complex Ata Beyit, where the victims of political oppression in 1938 were mass buried. There you can also visit the grave of the famous Kyrgyz writer – Chyngyz Aitmatov.  If you are interested in history and culture, but not traveling around Kyrgyzstan, you can also visit the archeological site of Burana.

There is a practical audio guide for exploring Bishkek on your own. You can download it as an app and listen to it as you explore the city even without an internet connection. If you would like to get to know Bishkek and travel around Kyrgyzstan join us for a tour with our knowledgeable and wonderful guide.